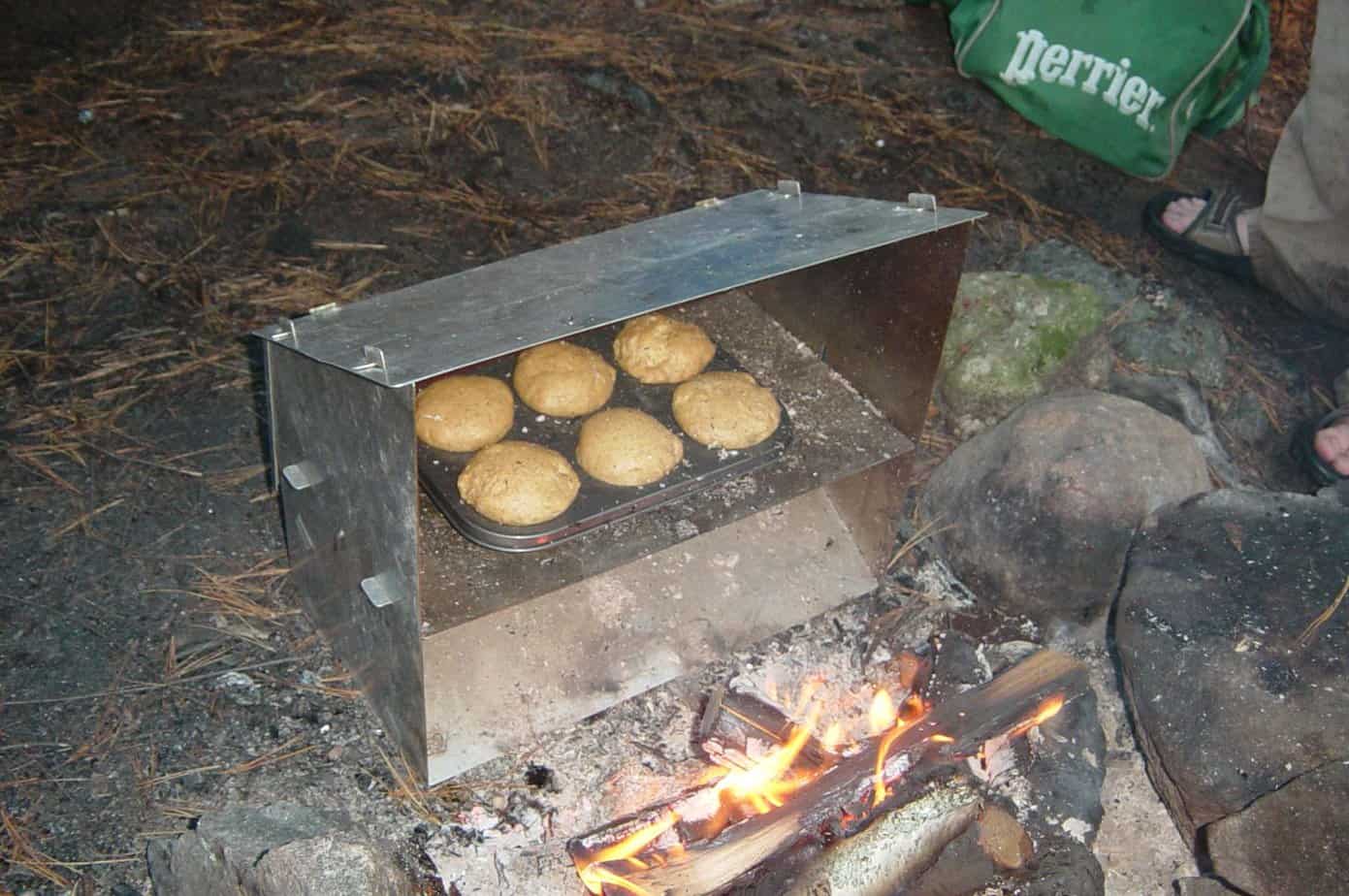 For anyone with a love of food and fires, one of the key pleasures of outdoor living must be cooking. Little provides as much enjoyment in camp as producing a good meal. Even those who don’t care much for the process will appreciate the results. If local ingredients can provide at least part of the feast, so much the better.

Armed with just a frying pan and pot, a whole array of boiling, dry-roasting, frying, sautéing, and even simple baking techniques can be employed. The addition of some form of wire grill allows…well…grilling.

With something like a Dutch oven also thrown into the cooking kit list, although perhaps not literally, true roasting and baking can be added with ease. But then a Dutch oven is hardly portable.

In terms of both weight and size, they do require some lugging about. Fine if you have a handy horse or 4×4, but not so convenient if you intend to travel into the wild in a kayak or by motorbike. Even a canoe will struggle a little, if only on safety grounds. Dutch ovens aren’t best known for their floating qualities, after all. 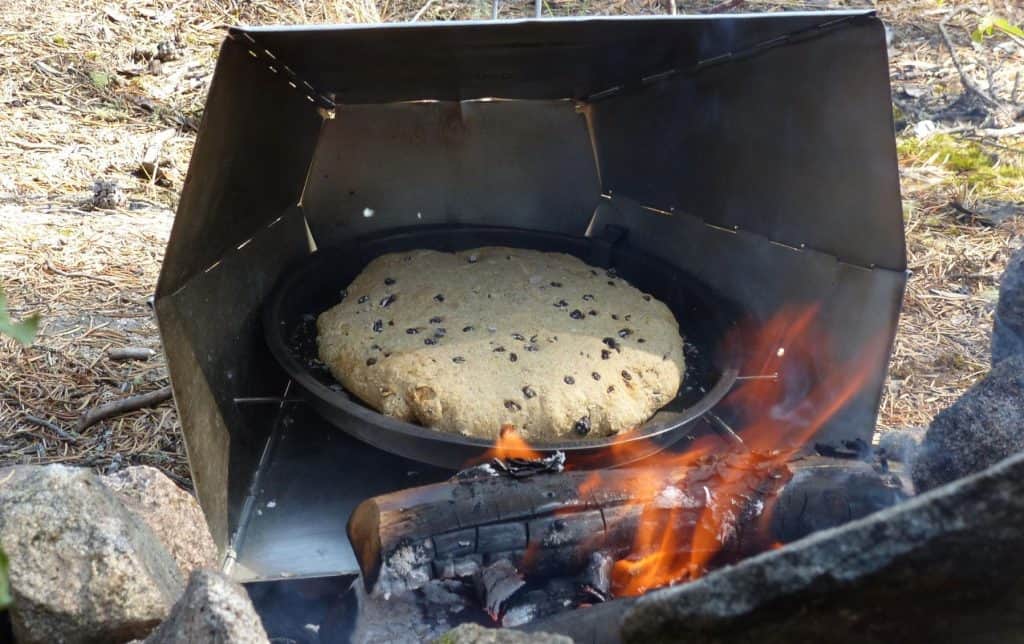 But if you are planning to travel light, there is still an option. A reflector oven can be used to bake and roast. Once the technique has been mastered and isn’t that tricky, it can surprisingly do the job.

A reflector oven works by capturing the heat from a wood fire in a completely different way to a Dutch oven – or just about any other camp cooking vessel come to that. This adds variety both to the task and the way you can use your fire.

The reflector oven is also extremely light, and my favorite version has an additional trick or two to make it even more portable. Not only are these cookers much less effort to carry than a Dutch oven, but they’re also probably easier than most frying pans too.

The principle behind the system is that the oven sits not over the fire but alongside it. Using the largest enclosed space’s metal walls, essentially an open-sided box, they capture and retain the radiant heat from the fire, principally the flames themselves.

This heat is held and reflected all around, even above, the food you’re cooking, allowing a surprisingly uniform and even result. So, what about that box. In the end, a whole array of open-sided metal containers will do the trick… up to a point.

Perhaps one of the best-known metal boxes that can be pressed into use, and a container that’s familiar to anyone who’s spent Christmas with grandma, is the one holding the biscuit assortment. Long after the chocolate-covered ones have vanished, and once that last plain biscuit has finally been eaten, these tins, or at least the square or rectangular ones, can make half-decent reflector ovens.

Often the inner tin coating is quite bright and reflective, which helps. If not, a lining of aluminum foil will retain and increase the reflected heat. I’ve even heard of people cooking successfully in reflector ovens made solely from aluminum foil, even folding up the result to be transported and used again.

On one occasion, I once cooked using a wok propped on its side and lined with foil. Mind you, the problems with propping it up, and providing support for the cooking tray inside, meant that this was undertaken more as a fun challenge than any sensible way to cook.

Larger, deeper boxes often do a better job than the biscuit tin option, although all these ‘found’ versions, including biscuit containers, should be approached with a little care. Many tins have visible, or even invisible, inner coatings or residues that can sometimes give off some pretty nasty fumes when used.

I suspect thorough heating before use should get rid of the problem, although if you still have any doubts, it’s probably best to be on the safe side and look for something else. I’m also aware that galvanized zinc coatings release a pretty toxic gas when heated (be very careful if you weld it) but have yet to find any convincing guidance on how hot the stuff needs to be before that release occurs. 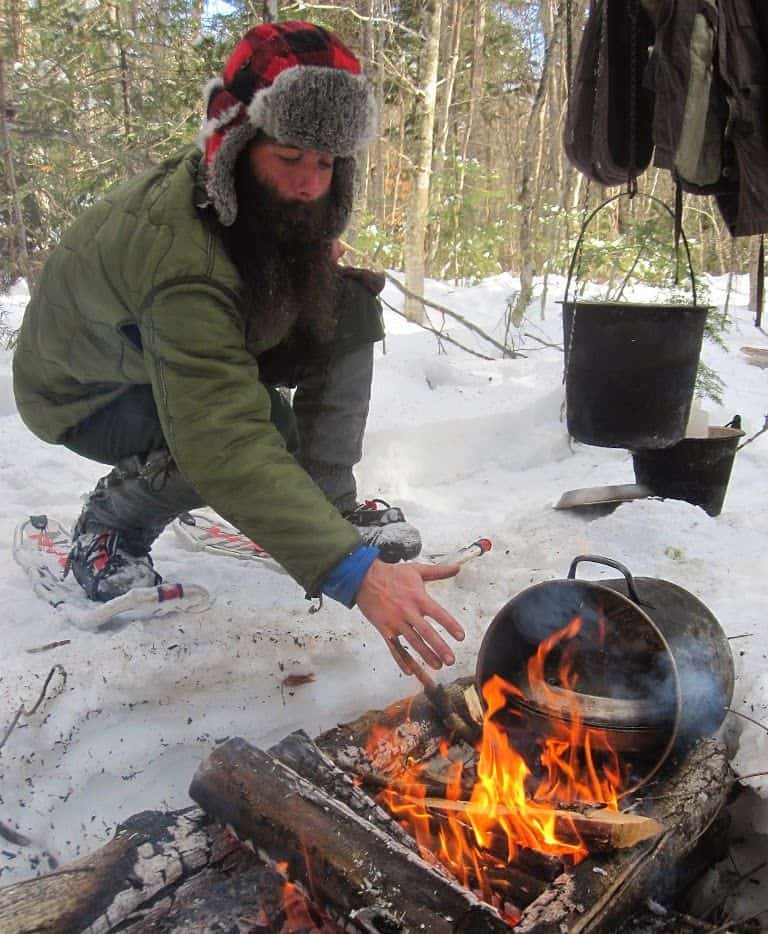 I suspect the metal has to actually melt before there’s a problem, but as I don’t know for sure, I avoid galvanized items altogether. And while these found or emergency boxes will do the trick, as I’ve mentioned, there are limits.

For a start, they are boxes, and they stay that way. Yes, they can double up as containers for other kits during your travels, but once used and sooty, the range of realistic storage options diminishes.

Something that is designed for storage that can be broken down and packed away has to be a significant improvement. More importantly, these plain boxes are also pretty inefficient.

The main advantage of a purpose-built oven lies in the angled sides. Set at the correct slant, these take the radiant heat from the flame and, as the name of the oven indicates, reflect it back in the direction of the food you are cooking.

The biscuit tin oven, or anything else with right-angled sides, never really puts this redirected heat where it’s needed, and in particular, usually fails to apply heat properly to the top of whatever you’re trying to cook.

Using it while cooking your food over the fire

Of course, those with the right skills can make a pretty impressive angle-sided reflector oven themselves. The model I first used as a Scout had been built by one of the troop leaders. It’s quite a while ago now, but I seem to recall it arriving flat-packed, the aluminum sheets possessing broad tabs that fitted into slots on opposing sides. The whole lot was then pinned securely in place. If those early campsite memories aren’t too rose-tinted to be trusted, it worked well.

The reflector oven I use takes the flat-pack concept and turns it into something of an art form. Sproul Baker has been making these ovens for camping enthusiasts, and they know what they are doing. One of the trickiest things about using such ovens is the troubling knowledge that you are not only about to get it dirty but inevitably cover its smart brushed aluminum surfaces with scratches. 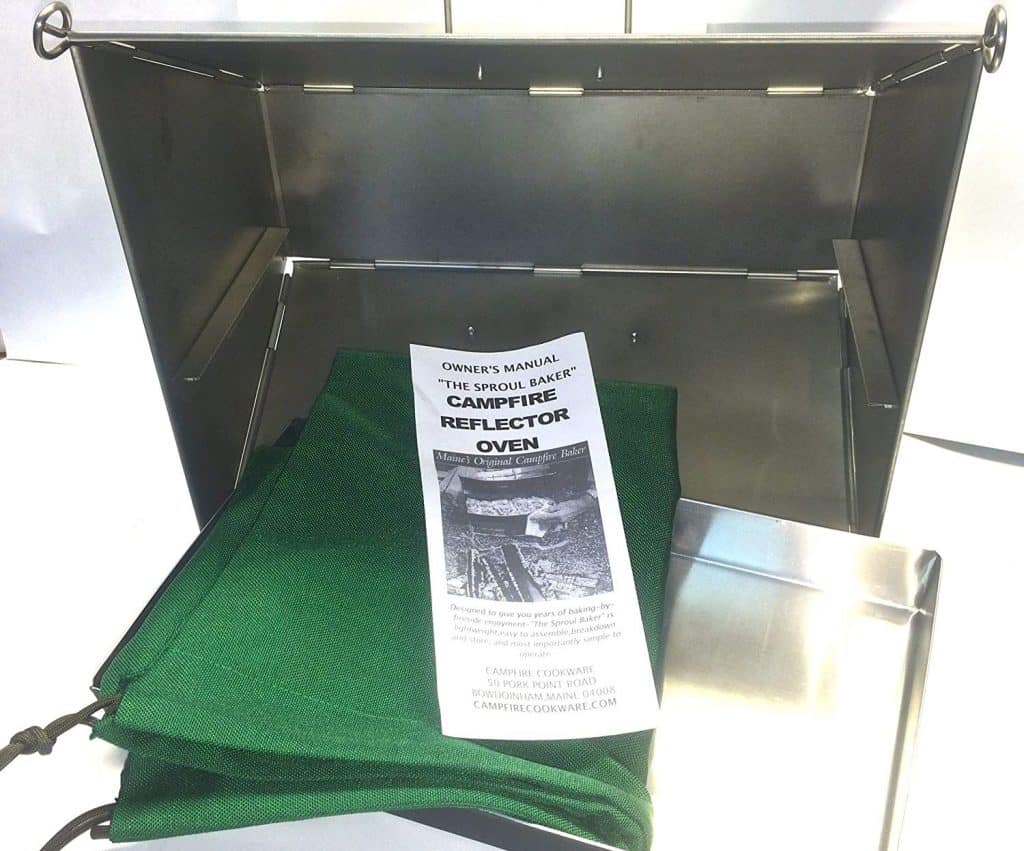 In terms of portability, the oven couldn’t really be bettered. It arrives in an incredibly light, thin bundle. Taking this slim bundle and turning it into an oven soon reveals the key advance on the handmade version I first used. Avoiding any element of slotting or complicated construction, it simply unfolds on neatly enclosed pin hinges to be locked in position.

And there it is. A stainless-steel shelf is then slid into place to hold your baking or roasting tray, with another pinned at the back to prop the whole oven at the correct angle for cooking. It looks great. But the proof, as they say, quite literally for a change, is in the pudding. And the puddings come out pretty darn well. As do baked mushrooms, loaves of bread, roasted potatoes, sausages, or roasted vegetables. It’s all quite simple, especially on the oven side of the equation.

With heat arriving from all angles, any tray or pan need only be turned occasionally to provide some impressively even results. Turning to your heat source, and to obtain the best outcomes, the oven needs to be sat on roughly the same level as the fire. That is, close, but not so near that the base becomes overlain with embers.

I understand that there is a chance it can deform or even melt when trying to obtain high temperatures, although this has never happened to us while cooking. From our experience, the fire doesn’t need to be either large or unwieldy to produce some perfectly usable cooking temperatures in a reflector oven – and quickly too.

Even with a fire not much bigger than a dinner plate and not lit for more than ten minutes or so, we’ve had cooking oil bubbling merrily around potatoes almost as soon as the roasting dish was sat in place on its seat. 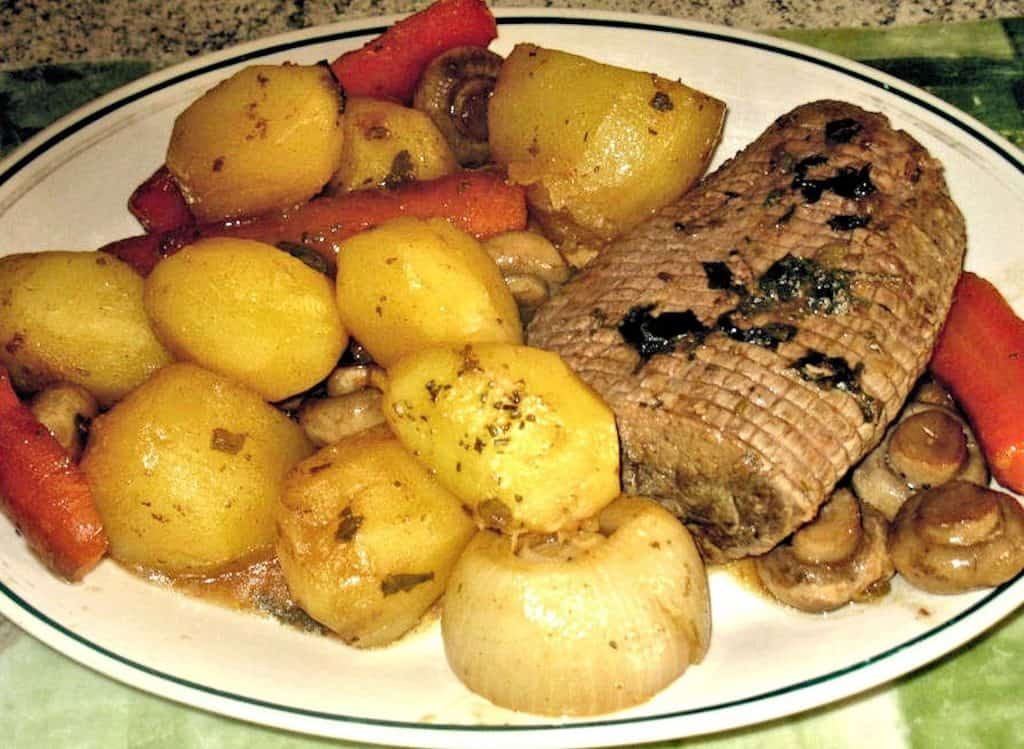 Unlike traditional wood fire cooking, when best results are obtained after developing a good deep bed of glowing embers, the heat captured by the reflector oven is from the flames. Using good dry twigs and thinly spit logs, those flames can be at work immediately. If less heat is needed, you slow the rate of stroke. When more is required, you simply feed them into the burning pile a little quicker.

And while it is undoubtedly easier to cook using a fire to heat the oven on its own, we’ve frequently managed to combine reflector oven management with a pot or grill shelf propped on our fire irons. It isn’t particularly tricky to manipulate a fire to display a dual personality; an ember-rich patch lying under the pot, pan, or grilling area, while a patch of flame dances merrily off to the side facing the open oven.

Fish and roast potatoes, cooked simultaneously, stand out as a particularly enjoyable meal from a dual-use campfire. The oven isn’t particularly big, but this does mean that it’s easy to carry. You hardly notice it amongst a normal canoe camping load, and I really can’t see it being a problem if carried in a kayak or on a bicycle either.

If you wanted to, I’m sure it would slide pretty much unnoticed into a backpack. And it has certainly proved big enough for the two of us. Yes, the bread loaves I’ve produced in the wild haven’t been that big, about half the size of the ones I might bake at home, but then that’s big enough, and it’s easy to just bake another at the next campsite. It also means your bread, real bread, of course, is always fresh.

The oven comes into its own when adding either roast potatoes to a main course or a baked pudding to follow it up, perhaps packed with blueberries or cloudberries. I guess if you’re traveling as a family or larger group, you would probably need something a little larger, although those puddings would probably feed four. And if you do need something a little larger, you could have all the fun of trying your hand at building something yourself.