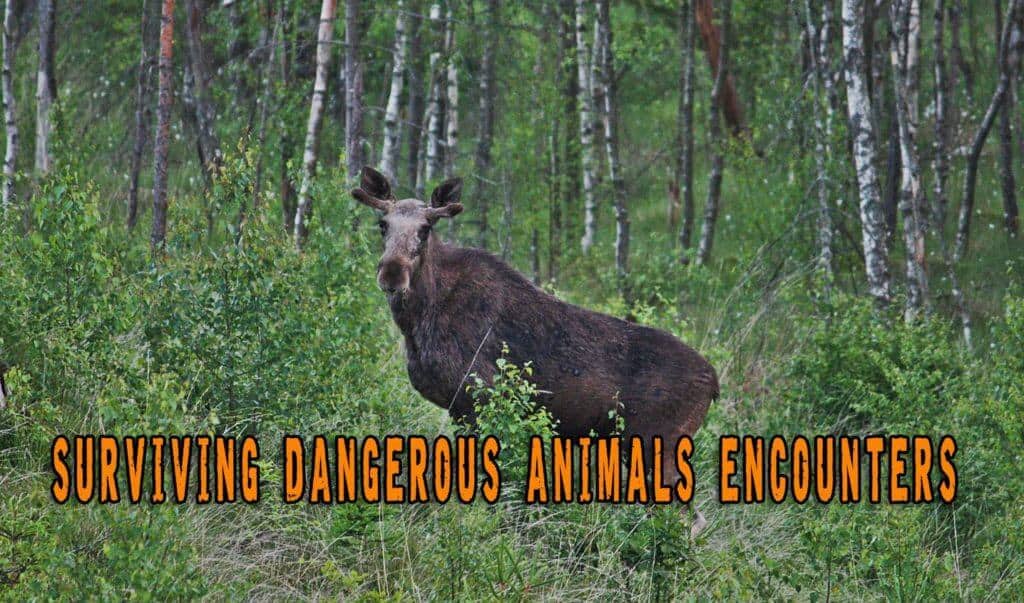 With the coming approach of warm weather, there are several preparations to consider. If you enjoy spring and summer hikes or maybe part of your bug out plan is to roll deep into some backcountry, you’ll need to be prepared for the fury of some dangerous furry animals.

Finding yourself between a rock and a hard place, or a mountain lion can be detrimental to one’s health and survival. There are a handful of beasts from the wilderness that you would generally want to avoid at all costs. Simply believing that a wild animal encounter won’t happen to you is to be full of folly.

The region in which you will be hiking, camping or bugging out will play a keen role in what types of dangerous animals (even not so seemingly dangerous animals) you may meet along the trail. Always know the area you are entering and attempt to be fully aware of its higher-risk animals. It is an idea to remember that not all animals are big brown-eyed sweetie pies.

There are a multitude of wild animals that very well, in fact, may attack a human, often resulting in a fatality. The best thing to do, in advance, is to learn the truth about these animals and practice what to do in the misfortune of coming into savage contact with one.

It is most important to remember that the superior way to sidestep trouble with wildlife is to simply use your noodle: Your common sense!

Always be alert and attentive to what is surrounding you, the area you are to be in, the animals that dwell in that area and the threat that they may present.

Keeping distance and taking specific steps to thwart alluring wild animals into your camp is the best protection and security:

These camp sanitation rules apply to all wild animal preventions.

Another step towards preparation will be to carry the appropriate defensive tools along with you. A defensive tool can range from a rifle to a stout knife, pepper spray to a club.

In a worse-comes-to-worst, the appropriate tool can help save your life during a dangerous animal encounter. Proper tools/methods may include:

Now that we have covered the bare basics of perilous animal encounters, we can get to the nitty-gritty: Specific animals that are known to be either aggressive, dangerous or just downright mean-spirited.

Black bears can be found all across North America and they’re not as friendly as shown in movies.

Though rare, a black bear can, at times, be encouraged to attack. Though it is typically when one is startled or surprised, or when you come between a mother bear and her cubs.

If you come into contact with a black bear:

DO NOT Run Away:

This method simply doesn’t work. You cannot, no matter its size, outrun a bear. It simply won’t happen. In fact, the f.e.a.r method may only provoke the bear to come faster and harder.

Attempt to show the bear that you are not fearful. Stand as tall as you can, wave your arms, clap and holler. Throw things. You want to scare the bear back from you.

(WARNING: if you are not paying attention, it is easy to slip too close to a black bear due to their bad eyesight. In this case, putting up a good fight may be your only chance).

DO NOT Fake Death:

This method may work well with a brown bear or a grizzly, but it doesn’t stand a chance against a black bear, as their attacks are typically on the offense (whether you find yourself between mama and a cub or daddy and his favorite blueberry bush).

To reiterate- avoidance is the best survival tactic. A grizzly bear doesn’t necessarily wish to eat you whole due to its ravishing hunger, but it will hurt or kill you if you happen to surprise it.

In the case of a grizzly attack:

Stay composed, and begin to back up slowly. Speak in calm, soothing voices. Show a degree of submissiveness to the bear.

DO NOT turn and run

This kind of behavior will certainly arouse an attack and you cannot outrun the bear.

A grizzly observes this as an act of aggression.

Once the bear lowers his head and his ears pin back, he is about to charge you.

Lie face down, fetal position, cover your head the best you can and play as dead as you can. You may be pawed at or bitten, but attempt to lie still. Often times, the grizzly will grow bored and stalk away. Other times he will not.

In the case he does not leave you alone: Put up a fight for your life.

You want to survive, you must survive. Use what you have; a big stick, your knife, a handgun, a rock. The focal point of your counter attacks should be on the bear’s eyes, nose and throat with as much violence as you can convoke.

Though it is rare to even see a mountain lion, let alone be attacked by one, it is still a possible danger. Mountain lions are known by a slew of names, including; pumas, cougars, or catamounts.

As with most other dangerous-classified animals, making noise while hiking is the number one precaution. You want the wildcat to know that you are present. If you see the animal, stay as far away as possible. Cougars are nocturnal, so it is dire to be extremely cautious when out at night. Another important precaution is to hike in groups when traversing wildcat country. Though cougars are known to stalk their victims, they generally won’t tackle humans that are walking in groups of two or more.

Stand still, stand tall. As with the black bear, attempt to stand tall and be bigger than the cat.

Keep your eyes on the cougar.

Do not take your eyes off the animal. It may look like it will live, but it may as well try to circle you.

Shout, clap and throw rocks if the cougar appears to be aggressive.

In the case of a blunt attack, treat the mountain lion the same as a grizzle. Fight for your life, do not give up.

Most commonly found in northern North America, Canada, and Alaska.

Though it is known that moose attacks are fairly uncommon, it is a known fact that the moose is one of the most dangerous animals that stalk the woods. Typically, moose are not aggressive. However, they are easily provoked when tired, hungry or especially during mating season.

Moose are massive animals and show a stubborn attitude of territory and possessiveness. Fatal injuries can occur when an attack consists of charging, kicking, stomping or impalement. Simply overstepping boundaries and entering their domain can prompt an attack. An enraged moose will more than likely attempt to stomp and kick its prey with all four hooves, as well as use their antlers as a lethal tool.

More often than not, a moose will quickly retreat when startled, however…

In the event of a moose attack:

Don’t be fooled by the Wily Coyote’s poor, pathetic antics, as a real pack of wolves or coyotes can wreak extreme havoc. Attacks on humans by these types of animals are becoming more and more common by the year. A wolf, also known as a prairie wolf, are well-known for their craft, clever and nearly artful way of stalking and disabling their prey.

These woodland creatures, typically traveling in packs, will stalk their prey, prowl in from behind quickly nipping and ripping at leg muscles and retreating until the victim is downed. Once on the ground, the pack moves in for the kill and then proceed to share the meat amongst one another.

Anytime you find yourself trekking through the great wilderness, remember to bring along your common sense and attentive behavior. Also, whether bugging out or simply hiking for fun, preparation and know-how will almost always save your life if you encounter any dangerous animals.

Remember respect as well, as the outdoors are home to all of us, mean wild animals included. If the proper precautions are followed, often both parties (ill-placed victims and attackers alike) can escape unscathed.