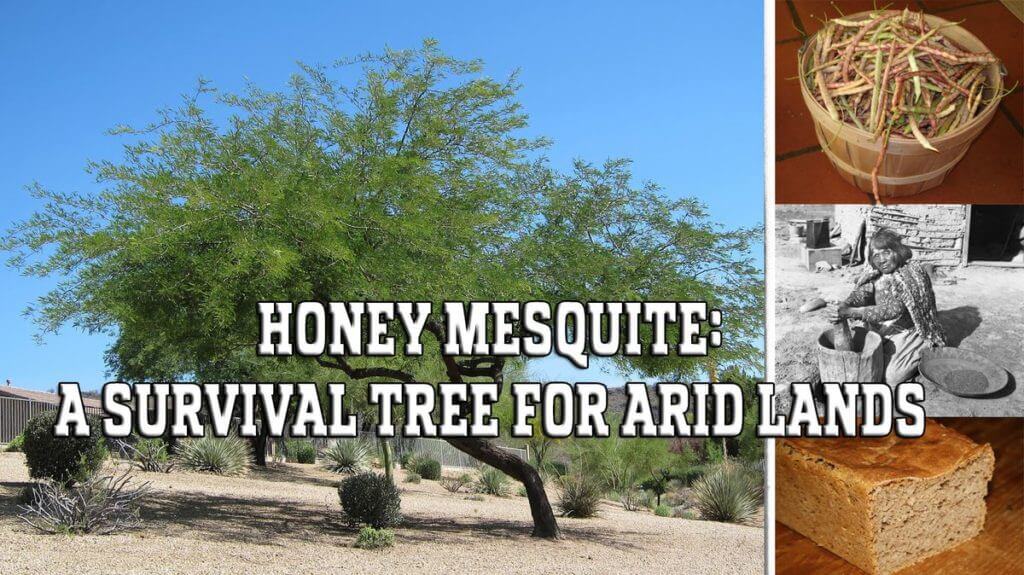 Honey mesquite also commonly called mesquite is an amazing tree native to North America that was a key resource of the native people. If you grow this tree on your property, it will provide you with food, drink, medicine and fertilizer, just as it did for the natives.

There are two known varieties of honey mesquite (Prosopis glandulosa):

Mesquite is a medium size tree that can grow up to 30 feet tall, although its average size is between 10 and 15 feet. It has spiny branches and leaves with 7-18 sets of paired leaflets. It is easily recognizable by its seed pod that resembles the common pea, although much bigger in size. Honey mesquite blooms yellow flowers that have many spikes. This is a self-fertile tree and it is considered an invasive species in some parts of North America.

Honey mesquite grows in a wide range of soils and is moderately salt and frost tolerant. It is known to thrive in environments with high temperatures (above 100 degrees Fahrenheit) and very low precipitation (less than 6 inches). This tree can usually be found in areas with groundwater reserves.  In its drier, western range it occurs along streams and in low-lying areas; in areas with more rainfall it occurs on open range or in chaparral.

The pods are quite sweet and are a good source of food for the animals and the people living in the arid lands where honey mesquite thrives. It was a primary food source for the residents of the SW North American deserts since the pods are easy to collect and store. Even more, unlike most beans, the pods are edible without cooking. The honey mesquite pods are still used as a food and beverage source in Mexico. Pod composition is 80% carbohydrate, 13% protein, 25% fiber, and 3% fat. The pods are useful for the production of flour, wine and tofu products. The tree is known to attract bees and mesquite honey is highly valued due to its particular flavor.

Pioneers used honey mesquite flour as a stretcher when “real” flour began to run out. For the original people, of course, it was flour. If you plan to make flour use only ripened beans (tan to reddish brown). The beans can be sun dry or oven dry. Rough-grind pieces (1-2 inches) in a muddle or on a similar stone surface. Regrind until a rough but uniform meal is produced. Sun dry or oven dry again (Important Step). Fine grind to produce flour roughly the consistency of cornmeal. Do not sift. Use as a substitute for flour or half and half in any recipe.

Here is a recipe for Mojave Mesquite Bread:

Preparation: Combine the dry ingredients. Add oil and water and mix until dough forms a ball and cleans the sides of the bowl. (Because mesquite beans and meal have a tendency to pick up any moisture from the atmosphere, the amount of water needed will vary with the weather). Lightly grease a cookie sheet or flat pan. Form the dough into a loaf on the pan and bake for 30 minutes at 350 degrees.

Preparation: Wash the bean pods and break them into one-inch pieces. Put them into a large cooking pot and cover them with about 7 pints water. Simmer slowly for one hour, covered. Strain the beans off and discard. Pour the water into a primary and stir into it half the sugar. Stir well to dissolve the sugar, then add chopped raisins. Cover with cloth and set aside to cool. When at room temperature, add acid blend, yeast nutrient and pectin enzyme.

Stir to dissolve these ingredients and set aside, recovered, for 12 hours. Add activated yeast and recover. Stir daily for 7 days. Strain off and discard the raisins, stir in remaining sugar until dissolved, transfer to secondary, top up, and fit airlock. Rack into clean secondary, top up and refit airlock every 30 days for next 4 months. Stabilize, bottle and allow to age one year before drinking. This wine will keep well, getting better as it ages.

You can also make honey mesquite molasses if you follow these steps: you will need to get 4 quarts water 1 LB Mesquite pods (washed). Place water and pods in a covered crock pot and cook at low heat for 12 hours. Strain and then reduce by boiling to the consistency of thin syrup. Cool and serve the thick, bold syrup on pancakes or toast. The medicinal properties of honey mesquite were well-known by the native tribes such as the Pima, Seri, Papapago, Paipai, Paiute, Tewa, Mayo, Yaqui and others. Honey mesquite has soothing, astringent, and antiseptic properties and has long been utilized due to its medicinal properties. Mesquite is commonly used to treat eye conditions, open wounds and dermatological ailments. Acting much as an antacid it can also treat digestive problems

The leaves make good eyewashes that can be used to treat conjunctivitis. Intestinal problems that the leaves can be used for are diarrhea. They can also be prepared to treat headaches, painful gums and bladder infection. A poultice of leaves is used for red ant stings. Leaves can serve as an emetic or system cleanser.

The branches, stems and inner yellow bark can be used as purgatives. The stems can be used to treat fever. Mesquite bark can also be used for bladder infection, measles or fever.

Mesquite pods are used to make eyewashes. Sunburn can be treated with a decoction of the beans. The pods can be prepared as a poultice that is applied to a sore throat or a as a drink that is taken for animal stings.

The part most used for medicinal purposes is probably the gum exuded from the trunk. It can be used as eyewash to treat infection and irritation. Its several dermatological uses include treatment for sores, wounds, burns, chapped fingers and lips and sunburn. Also good for stomach ailments it can be taken for diarrhea, stomach inflammation, system cleansing or to settle the intestines. Other uses for mesquite gum include treatment for lice, sore throat, cough, laryngitis, fever reduction, painful gums, hemorrhoids and it can be used as a purgative.

Other uses for honey mesquite

Honey mesquite can be used as fodder and the pods can be grind and used to feed pigs, goats and sheep. Cattle and horses can also be fed with mesquite pods fodder, but in a lower percentage compared to the diet of goats and pigs.

Honey mesquite wood is an excellent fuel (around 28 million BTUs per cord) and the wood chips and charcoal can be used for barbecuing or smoking purposes as the wood smoke lends a pleasant flavor to cooked foods.

Mesquite wood is very dense and has very balanced shrinkage on drying, making it a perfect tree for woodworking. It can also be used for fencing.

This is a tree that can also help improve the soil and it was proven scientifically that soils under honey mesquite are enriched with nitrogen. It can also be established as tree crops for alley cropping, windbreaks, or timber belts.

How to grow mesquite tree

You should know that mesquite pods ripen simultaneously and you should pick them when the seed rattles in the pod. The seeds store well in a dry place and they can be maintained for years or even decades. When sowing the seeds, you should first let them soak for 24 hours or chip or cut the very tough coating to allow germination.

The best temperature for seed germination is between 68 and 104 degrees Fahrenheit. Scarified or sprouted seeds should be planted in a well-drained soil mix If small containers are used, transplant seedlings 2-3 weeks after germination to avoid disturbing the dominant tap root. Young seedlings can have root to shoot ratios as high as 10:1. Larger transplants can be grown in deep containers.

Although it can be grown in deep containers, best growth is achieved in areas where the root system can reach groundwater. Fencing or seedling protectors will usually be needed to protect young, transplanted mesquite seedlings from rabbits or other grazing animals. To ensure good tree form, the leader should be protected against grazing. Honey mesquite can become a serious invader on disturbed lands or overgrazed rangelands.

Honey mesquite is an ideal tree for your garden if you live in areas that have normally low rainfall and just like Moringa Oleifera, it can be labeled as a complete survival tree. It was an important resource for the Native Americans and it can still be used today as a significant food, drink, medicine and fertilizer source.

3 thoughts on “Honey Mesquite: A Survival Tree for Arid Lands”