How many times have you swallowed a piece of food that was too big and started panicking that it won’t go down? While you may have been lucky and eventually managed to swallow that piece of food, others weren’t as lucky.

When the food doesn’t go down, and you have trouble swallowing, it becomes a medical emergency. However, biting more than you can chew is not the only thing that leads to airway obstructions causing you to stop breathing.

In this article, we will look at some of the common airway obstructions, and we will learn what we can do to relieve them.

What is the Airway? 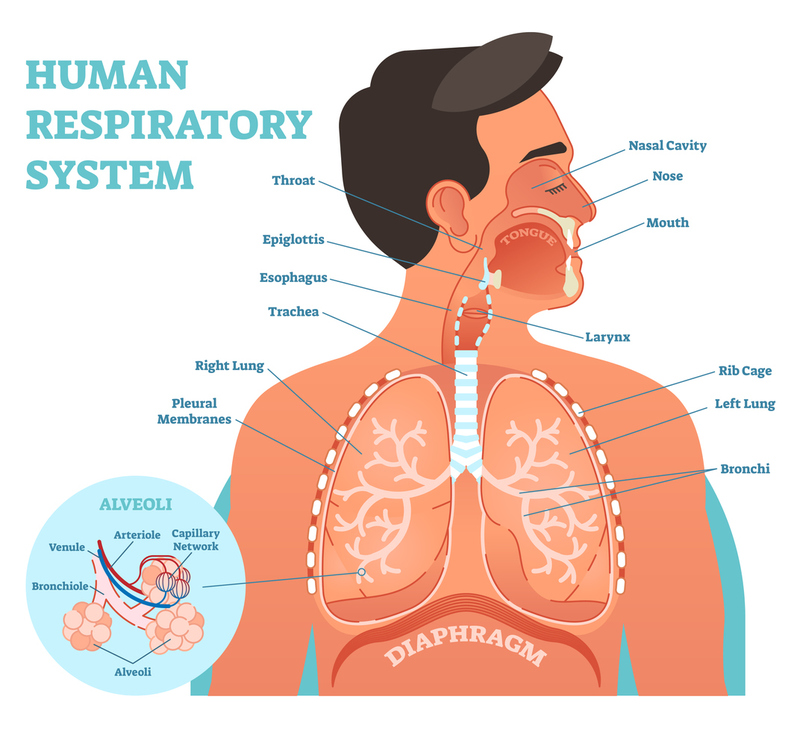 What is an Airway Obstruction?

In simple terms, airway obstruction is some type of blockage in any part of the respiratory tract (upper or lower) that will limit or block entirely the amount of oxygen entering your respiratory system. A blockage that will prevent you from getting enough oxygen to breathe.

The airway obstruction can be total or partial, meaning that the upper or lower tract may be partially blocked, allowing a limited quantity of oxygen to enter the body, or it can be completely blocked, a case in which the patient will be deprived of oxygen. Both airway obstructions may have different causes and dangerous outcomes. 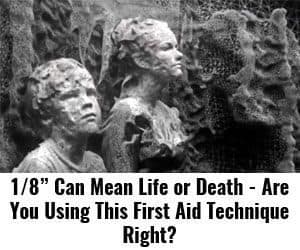 In the case of partial airway obstruction, the size of the obstruction will determine the level of difficulty breathing. If the Airway is completely blocked, the patient is diagnosed as suffering from respiratory arrest (cessation of breathing).

While a lower flow of oxygen in and out of the patient’s body is dangerous and can lead to serious health complications, once respiration stops, if not relieved quickly, cardiac arrest will follow, and the patient will die. 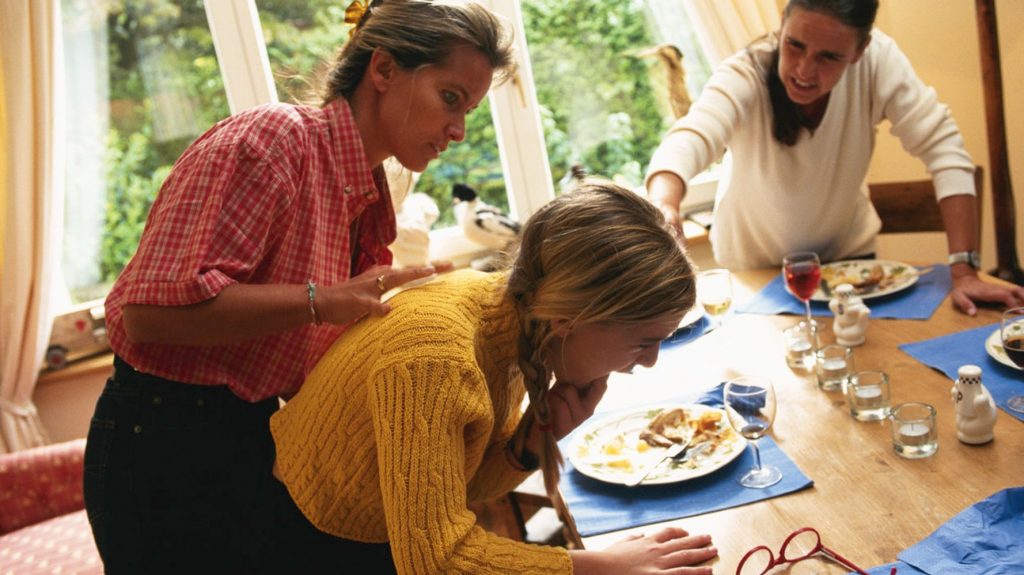 The inhaling of a foreign object is commonly known as choking, and such objects become lodged in the Airway, preventing or completely blocking off air from entering the lungs.

While choking on a foreign object is the main cause that leads to airway obstructions, the airways can also be blocked off as a result of an illness. For example, tonsillitis, epiglottitis, croup, and other types of inflammation can lead to acute or chronic airway obstruction.

Heat also damages the airways leading to inflammation that obstructs the intake of oxygen. For example, victims of housefires that are inhaling a lot of smoke and heat will often show injuries to the soft tissues of the airways. The soft tissue injured by heat will quickly swell and will compromise the Airway.

Besides heat, a traumatic injury sustained during a motor vehicle accident or even a nasty fall can lead to acute, partial, or complete airway obstructions. Bleeding, the swelling of soft tissue, and even teeth entering the Airway are often causing airway obstruction during accidents.

Another cause leading to the blockage of the Airway is the tongue flopping against the back of the Airway in unconscious individuals. When someone is reentered unconscious, regardless of the reasons behind this state, the muscles in the body will relax, and since the tongue it’s a muscle, it can fall against the back of the throat. When this happens, if you don’t act quickly and get the Airway open, the brain will be deprived of oxygen, and long-lasting lesions could occur.

Airway obstructions, if not corrected in time, will often lead to brain damage.

How to recognize Airway Obstructions

If you snore when you sleep, I have some bad news for you since you’re suffering from partially obstructed airways. While for some, this can be only a nighttime annoyance, for others, it can become a dangerous problem. Some people experience a completely obstructed airway when sleeping (known as obstructive sleep apnea), and if not treated properly, it can be deadly.

While snoring is one sign of airway obstructions that are often ignored, the respiration rate is a sign that most folks pay attention to when something’s not right. The normal breathing pattern of an adult is around 12 to 20 breaths per minute at a steady pace. If there’s a noticeable deviation in the breathing pattern, one needs to investigate and figure out the cause before it gets worse.

When someone has partially blocked airways, he or she may be wheezing, coughing, or making abnormal sounds like squeaking or high-pitched sounds. If the patient can vocalize, then it means the Airway is only partially obstructed.

If no chest movement is observed or no sounds are coming from the Airway; the patient has a completely obstructed airway. If he or she is still conscious, panic and anxiety will follow, and they will instinctively put their hands up to the throat and/or mouth, asking for help.

Once the oxygen level is dropping in the patient, you will notice a bluish hue in the lips and skin or nail beds. In medical terms, this is called cyanosis. If the oxygen levels drop too much and the brain is deprived of oxygen, the patient will lose consciousness. You’ve now experienced respiratory arrest, and if you don’t act quickly, it will lead to cardiac arrest and death.

How to treat Airway Obstructions 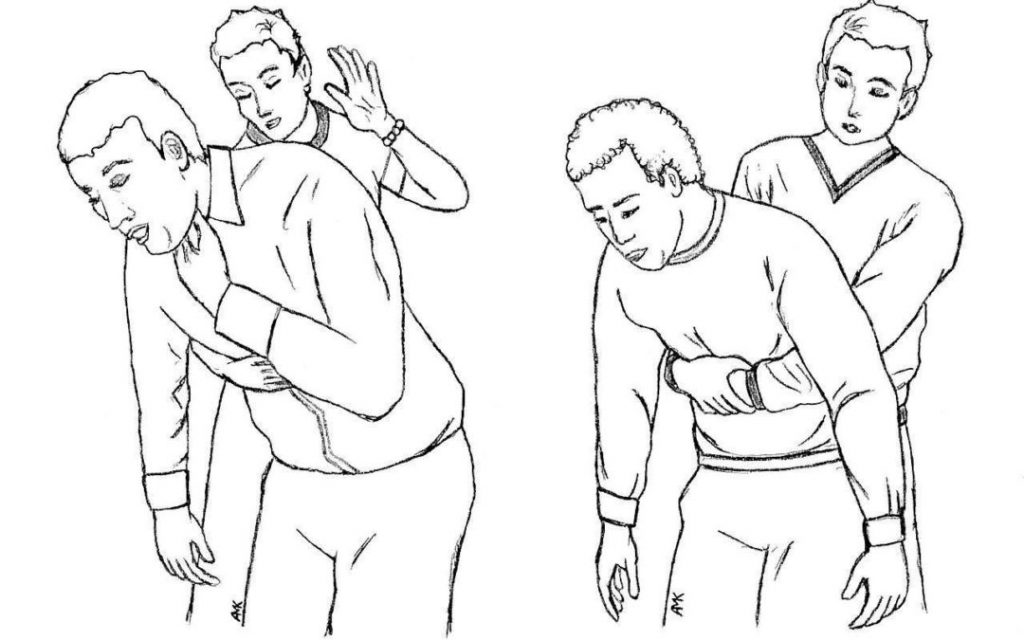 When someone snores, they are poked by their partners, and they will turn over and self-correct their partially blocked airways. This isn’t an emergency in most cases, and people will stop snoring after correcting their sleeping positions.

However, during a more serious, acute partial obstruction, when the patient is able to breathe, he or she will try to clear the obstruction on their own by coughing and hopefully dislodging the obstruction. If they are experiencing a complete acute obstruction such as choking on a piece of food or another foreign object, performing the Heimlich Maneuver is their best option for survival.

Wrap your arms around the victim’s waist, slightly above the belly button and make a fist with one hand, bending the thumb with the knuckle pointed out. Cover the fist with your opposite hand, and sharply pull upward with sets of five abdominal thrusts until the obstruction is relieved.

If the Airway is obstructed due to swelling, acute or chronic in nature, you will need to get the patient to the ER since you will not be able to provide definitive care at home.

If you find yourself alone at home and you choke on a piece of food, you will need to self-administer abdominal thrust similar to the ones from the Heimlich Maneuver. Find a chair or go to the couch and lean over. Place the top of it (chair/couch) firmly around your belly button and start forcing yourself downward to apply force to your abdomen. Keep trying in sets of five thrusts until you remove the obstruction.

What should you do if you can’t relieve Airway Obstructions?

If you cannot remove the obstruction or if the patient becomes unconscious, you will need to perform CPR. Call 911 and request the help of EMS while providing CPR.

If the tongue has flopped back on the throat, place the patient into a recovery position by rolling him/her onto their side as a unit. The bottommost arm should be up and underneath their head to act as support, while the uppermost leg acting as a kickstand to support them as the bottommost leg is extended.

The patient’s uppermost arm is then placed up in a bent position as a support for their head, while their head is angled toward the ground in an effort to allow gravity to pull the tongue from the back of the throat in order to open the Airway.

This should allow the person to breathe, but it also lets blood, saliva, emesis, or anything else drain out onto the ground, preventing these fluids from going back down the Airway, thus creating an aspiration risk.

This position can be used if the person is still breathing on its own, observed by the chest rising up and down or by abnormal sounds.

Those that experience a serious choking episode can attest that not being able to breathe is a terrifying experience. Understanding what’s going on when airway obstructions occur and how to alleviate them oftentimes makes the difference between life and death.

Seek out proper first-aid training so that you can be mentally and physically prepared to act quickly if you notice someone choking.