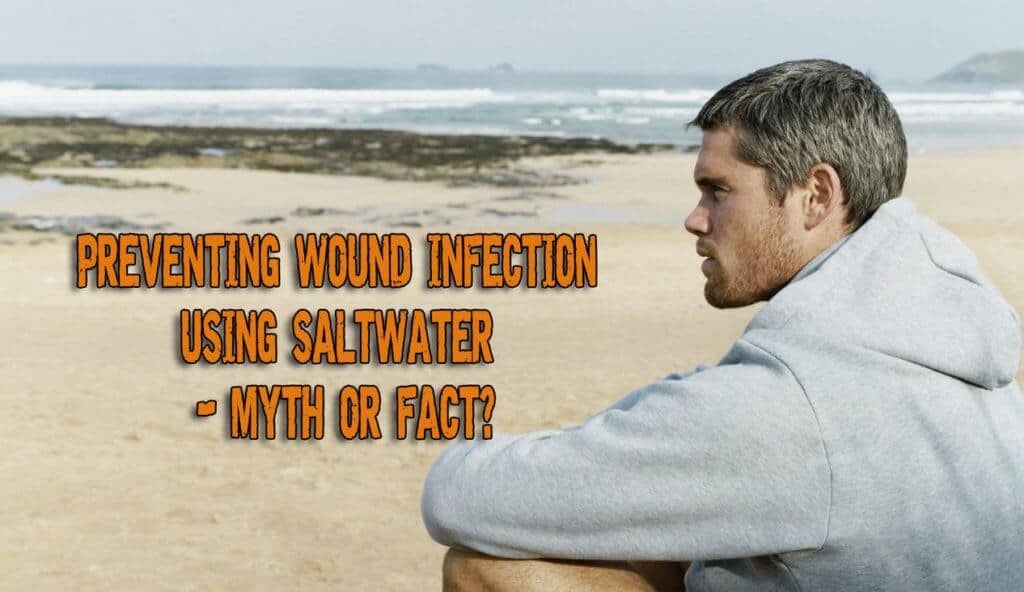 You’ve seen in movies how the hero stranded on a remote coastal shoreline has to improvise in order to survive. While accidents are a common occurrence in the unfamiliar environment, our hero will cut himself against the edge of a sharp stone to bring more drama to the whole movie. But fear not, the deep bleeding wound covered in sand and grit from the fall will soon be cleaned with seawater. Preventing wound infection using saltwater may work, but there’s much more to it than what the movie script is showing you.

Humans had to adapt to new environments in order to survive, and the first explorers cleared the path for the next generations. A lot of the knowledge we possess today was passed down from one generation to another. Even though we improved it with the help of our wits and a few technological aids, the basic core line is the same, we had to adapt to survive.  While the early humans had nothing more than what Mother Nature was offering them, nowadays we have all sorts of modern help to aid us in our journey.

If you’re an avid traveler and a lover of the outdoors, you probably recall hearing that saltwater can kill bacteria and you know that hospital personnel often rinses wounds with saline solution. That being said, if you find yourself stranded in the wilderness, near the coastline and you wash your wounds with seawater, you may find yourself wondering if this actually works. In doing so, you will probably make things worse because preventing wound infection using saltwater doesn’t really work. In fact, it’s quite dangerous to do so and here is why.

The truth behind the myth of preventing wound infection using saltwater

Like most survival myths out there, the basis of supposed healing properties of seawater and how preventing wound infection using saltwater are founded on a grain of truth. In fact, salt is actually capable of preventing the growth of certain types of bacteria. A high salt concentration in liquid creates a hypertonic solution. The type of liquid that is capable of pulling out moisture of susceptible bacteria cells via osmosis. This will slow and even stop the growth of bacteria.

Even more, we know from ancient history that salt was used as a primitive antiseptic in Greece and Rome. Nowadays, salt is being used to preserve meat and you’re probably familiar with salt curing.

Sailors were probably the ones who came up with the habit of rubbing salt in a wound even though it intensifies pain. However, they were willing to suffer just to avoid deadly infections seeing that medical aid was unavailable.

Getting down to the root of it all, it seems that people still believe that preventing wound infection using saltwater works. All because medical professionals are using saline solution to irrigate wounds. However, as you will see below, there are two major differences between the medical saline solution and saltwater.

The medical saline solution is isotonic (has the same salt concentration as cells and blood). It contains around 0.9 percent salt to mimic the natural salinity of your body. This is why you don’t feel any burn or intense pain when it’s applied. Even more, when the saline solution is applied, the scope is to flush the wound rather than killing bacteria at cellular level.

Compared to the saline solution, the sweater is hypertonic (has an excessive amount of solute extracellular and osmosis is causing water to rush out of the cell). It contains around 3.5 percent salt. This is why you feel that painful stinging solution when applying seawater or saltwater on the wound. While it may kill certain types of bacteria, other microorganisms thrive in saltwater.

This is actually a major point when comparing the two options for flushing wounds. Medical saline is sterile and it won’t introduce new bacteria into your wounds. However, seawater can contain all sort of traces of human pollution and a variety of microorganisms.

Here are just a few of the dangers hidden in seawater:

Preventing wound infection using saltwater doesn’t actually work. As various studies showed us when exposing open wounds to seawater, blistering and deep skin and muscle infections can occur. These can be fatal in an environment when professional medical help is not available.

Now that you are aware you that preventing wound infection using saltwater doesn’t work, you can look for alternatives. Since you won’t have any saline solution lying around unless you brought a first aid kit, you are better off just washing your wound with drinking water or water that was previously boiled and let to cool.

Another alternative would be to use honey or sugar, or a combination of both. These two ingredients are beneficial for cleansing and healing traumatic wounds. Treating wounds with honey and sugar is an ancient method of healing that was tested over time. The ancient Egyptians were the first to document this process. The healing proprieties of sugar and honey are mentioned even in the Bible, Koran and Torah.

You could also use a poultice made from plants you find in your environment. Depending on the injury, you could apply a warm or a cold poultice on the affected area. The warm poultice will stimulate blood circulation while the cold one will help soothe the injured area. Using wild herbal poultices is perhaps one of the oldest methods of herbalism. Thanks to the Native Americans and the early pioneers, we now know what wild plants were harvested and used to make healing products.