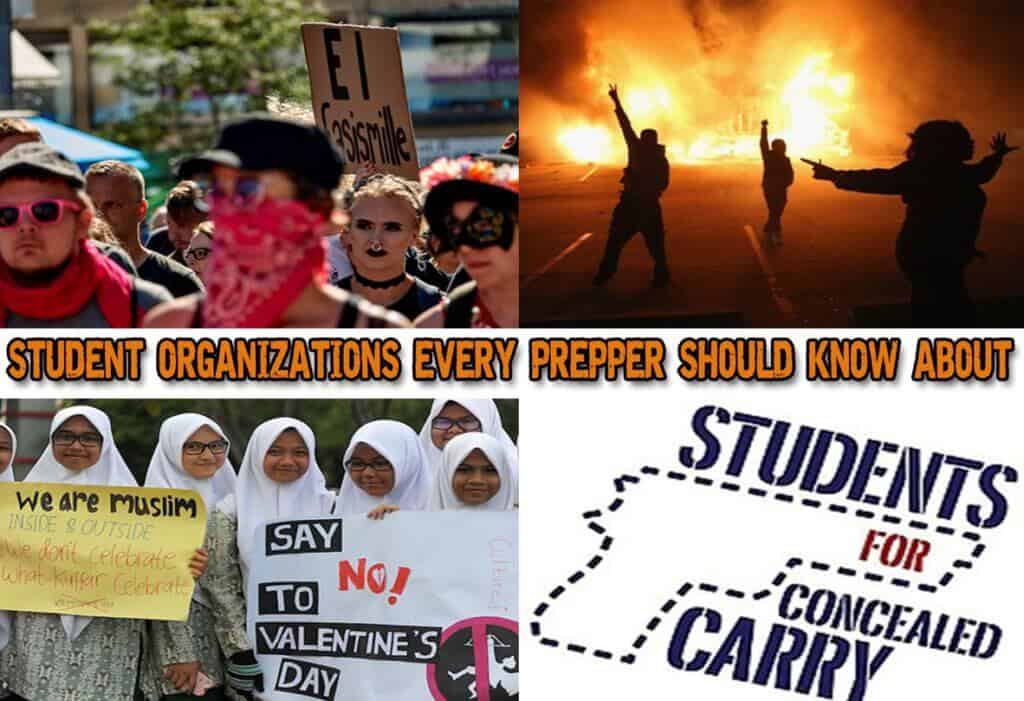 The 1960s were a watershed moment in the history of American higher education because this was the decade Cultural Marxism got its grubby hands on our universities. Students all over America had their minds poisoned by Communist political organizations. Now those brainwashed students are our professors, congressional representatives, Federal judges, and Federal bureaucrats.

And worst still is the fact that their early radicalism helped to create an even more radical generation of youngsters who are anti-free speech, anti-Christian, and anti-gun. We have provided a list of the student organizations that are helping to ruin our college campuses.

Students for a Democratic Society

One could argue that the movement that helped to get the ball rolling was Students for a Democratic Society, an organization from the 1960s that an FBI report described as “… a hard line Marxist-Leninist-Maoist organization dedicated to the destruction of Western democratic traditions and ideals.”

If one looks through this organization’s roles, you will find many fine, upstanding fellows, such as Bill Ayers and Bernadine Dohrn of Weather Underground fame, both of which went on to become famous, prominent educators and professors.

These bomb-throwing maniacs and social justice warriors are the ones teaching your children from elementary all the way up to graduate school. With great mentors such as these teaching our children, it is no wonder the following organizations are currently so prominent on college campuses.

Antifa is a group of black-clad and masked thugs who operate in and around college campuses where they disrupt peaceful protests and debates held by members of the center-right and alt-Right. Not only do they disrupt protests, but they also disrupt them violently, notable examples being the Battle of Berkley and the Unite the Right Rally in Charlottesville, Virginia.

Antifa’s justification for such actions is that they have to protect society from those they deem as “fascists” and “neo-Nazis”, but what they really do is attack peaceful protestors with whom they disagree, and they use the aforementioned pejoratives to justify their violence. All in the name of progress I’m sure.

One has to wonder where students get the time to do these things, but my guess is that they get online help with their assignments.

When black Trayvon Martin attacked “white-Hispanic” George Zimmerman, and was killed in self-defense, the fake news media spun a false narrative of George Zimmerman following and gunning down the black teenager in cold blood for walking through a white community. Thanks to this blatant dishonesty on the part of the media, every time a police officer shoots a black person, blacks riot.

Black Lives Matter is behind almost every riot in majority black areas. Its ranks are filled with young leftist blacks who leave their campuses and start agitating in cities such as New York, Baltimore, and Ferguson every time police shoot a black criminal.

This organization founded by the Muslim Brotherhood has chapters at almost every single American university, including MIT, Yale, and Colombia, and they may be responsible for the radicalization of Muslim students. Most notably al-Qaeda terrorist Aafia Siddiqui who is currently serving what is effectively a life sentence in federal prison for terrorism. This is not surprising since many members of this organization follow the teachings of Abdullah Azzam, an early mentor to Osama bin Laden.

If your son or daughter comes back a different gender, comes back hating men, or returns home horribly disfigured by tattoos and piercings, it might be because your kid was influenced by an LGBTQ or feminist organization on campus, such as Gay-Straight Alliance or the Feminist Student Organization. They are everywhere, and their members are heavily involved in organizations such as Antifa and Black Lives Matter.

Students for Concealed Carry began to hold “empty holster” protests on college campuses across America to protest college campuses refusing to allow students with valid conceal carry licenses from carrying on campus. The group stated, “Until they can take responsibility for our safety and guarantee our protection, colleges can’t be allowed to deny us the right to self-defense.”

In addition to holding protests, the organization has engaged in legal action against liberal universities that refuse to allow students to carry on campus. In 2008, the Mountain States Legal Foundation filed a lawsuit against the University of Colorado on behalf of Students for Concealed Carry. They won the lawsuit, and as a result, dozens of universities had to back down from their stances against conceal carry license holders.

And preppers are considered radicals?

The lying media and liberal socialites love to portray us as Bible-thumping, gun-toting hicks, but is it any wonder why we cling to our “guns and religion” when radical college students beat people up, riot, and recruit gullible young people into terrorist organizations as they did with Aifa Siddiqui?

We prep because these godless radicals, who know nothing about economics or foreign policy, are going to be our future leaders making political decisions for our country. When they cause America to collapse economically, culturally, and spiritually, we want to be ready.

The biggest lesson you can take from this guest post is to not send your child to college. Why go tens of thousands of dollars into debt so that you can have your child brainwashed by these radicals and freaks? You would be better off sending your child to a trade school where he can learn a real skill instead of engaging in anti-social political activity.

This article has been written by Nicole Lewis for Prepper’s Will.

3 thoughts on “Radical Student Organizations Every Prepper Should Know About”