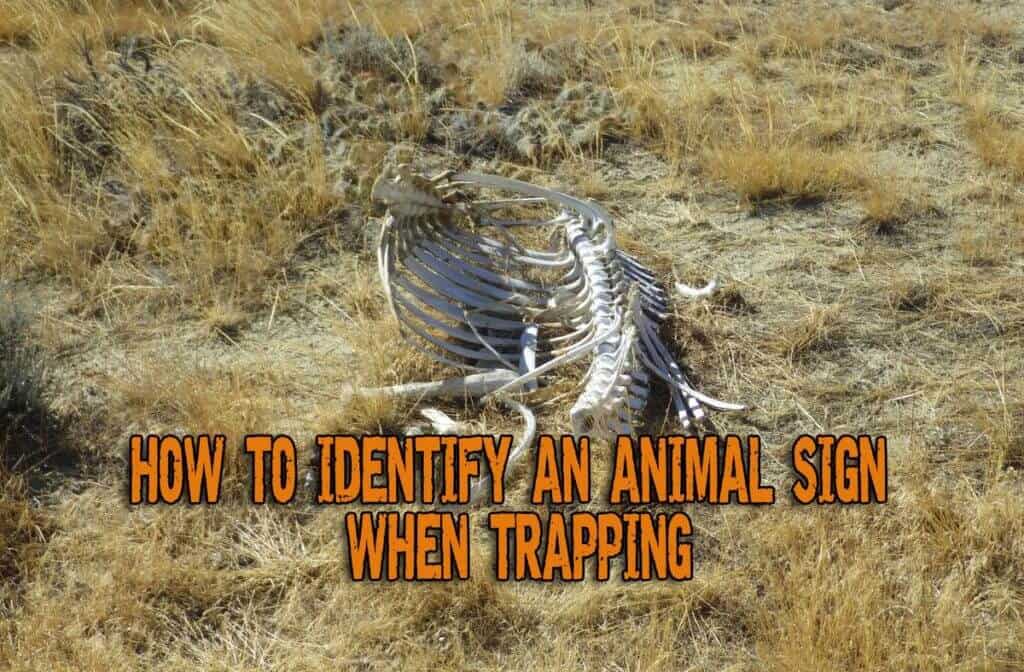 Primitive trapping is one of the skills that helped humans survive and thrive in austere environments. This is a topic of interest for preppers, and it takes years of practice to become a self-reliant trapper. One of the challenges of trapping animals is learning how to look for and identify an animal sign. If you are new to trapping animals here is what you need to know.

In the old days, the first settlers and Native Americans used primitive traps built from readily available materials. Nowadays, we have all sorts of steel traps and gear designed to make your life easier in the wilderness. If you are forced to bug out into the woods and you should expect an extended wilderness stay, carrying the proper gear becomes essential. However, you will still need to have a good knowledge of what it takes to successfully use primitive trapping methods.

In order to become successful at animal trapping, you need to understand a thing or two about the animal you are hunting. Learning to identify an animal sign when setting your traps eliminates guesswork. Even more, you should comprehend how the animal you’re after functions.

Basically, you should understand: Animals, just like most humans, are predictable. We could even say that they need the same basic things as we do: a safe place to sleep, water, food and a mate.  They do not have major concerns as we do, they do not require wealth and fame, and their sole purpose in life is multiplying and prolonging their species.

Animals spend quite some time traveling to and from feeding or watering areas. They are most cautious during these activities. If you manage to identify a travel route, it would be an excellent spot to set traps. Especially if you can bait the trap properly. Most animals are opportunistic by nature and will not say no to an easy meal.

To properly bait a trap you need to learn a thing or two about the animal’s diet. It is an important factor because it will also help you identify the animal sign. A baited trap using the favorite food of the animal is more likely to catch an animal that a route trap that is not baited.

To increase your success in bagging an animal, you should trap only where there is an animal sign. As a brief explanation, an animal sign is anything the animal leaves as a trace that indicates it’s presence. Or anything that shows it may have passed through a certain area. As a trapper, there are seven types of animal sign that you need to know. It will help you identify the origin of the animal, its eating habits and even population numbers.

By looking at the tracks the animal leaves when traveling from one place to another you can easily identify the species. This can also help determine population numbers and the frequency of travel in that region. It can point out diet habits in case you can tell that an animal has been trailing another. Track identification is one thing that you should focus on studying before you even begin learning about trapping.

A true tack is simply the track that depicts the real shape of the animal’s paw. With every step, an animal takes its toes land lightly on the ground first, ensured by the heel pressing into the earth. Next, the toes will roll forward slightly before the track is pressed into the soil and its foot is lifted. This whole process slightly warps the true track. However, it does give you the information needed for the animal’s direction of travel

Scat or poop left when an animal defecates will also help you identify the species. Even more, it will tell you what food source the animal is currently feeding on. Scat may help determine the animal by its size, shape, consistency, and content.

Scat is found in areas where the animal feels safe, often near lays. Sometimes mammals, especially carnivores, use scat to leave scent marks that communicate information to their neighbors. Dryness of the scat can help determine how long the scat has been exposed to the elements.

Herbivore scat will be loose and moist in the summer. In the fall, scat will show signs of nuts, seeds, and fruit. In the winter, scat will become harder and show signs of twigs and bark. Herbivores such as deer, rabbits, and rodents tend to leave small scat that is uniform in texture (pellets). Carnivores and omnivores like coyotes typically leave larger scat that contains hair, bones, and seeds.

This is something that the animal has left after it is gone, a part of its body if you will. As an example, think about a strand of hair left on a fence wire. Or if you are tracking birds, a feather dropped while preening is a clear animal sign.

Finding the remains of an animal will provide you with clues to what other animals are in the area. Even more, it can provide you with useful resources (such as bait) and attractants for other traps.

The body of a dead animal or its remains will usually be found at kills sites. The areas where carnivorous animals have left the remains from their feeding activity. These kill sites should be approached with caution because large animals may still be present in the area.

Yes, even animals are known to produce garbage. This is a good thing because it provides a clear animal sign that will help you identify the species and its travel routes. For example, a squirrel’s garbage pile will be littered with shells from nuts the squirrel likes to eat. Another good example is the beaver since it often leaves behind chewed trees and branches.

Finding a den can be tricky and dangerous in certain cases. After all, it’s the animal’s home, and you don’t want to come knocking without having the means to deter unwelcoming behavior. A den can be anything from a hole in the ground or in a bank or the hollow of a tree.

The type of den is often a clear indicator of the species. An experienced tracker will identify this animal sign even if it’s not visible for the common Joe. Even more, he or she will be able to set traps at the entrance or the exit of the den.

This is the trickiest animal sign to identify, and it takes years of practice and experience to train your nose in the wilderness. However, there is still hope, and your sense of smell can learn to identify urine and its distinct smell.

On the other hand, the smell of rotten meat from a carnivore den where the animal you are tracking might live is easier to identify. The smell of a skunk can also be identified and you will figure out if there’s one in the area. However, other subtle smells can be identified only via experience.

Identifying an animal sign can be easy in certain cases and damn near impossible in others. To improve your chances of trapping an animal, you should start with the basic: track identification. Once you gain experience, you will be able to locate feeding grounds and kill sites, but also to spot dens easier. Remember that animals are predictable and they stick to their habits. The more you know about the animal you want to trap, the better you will become at spotting the animal sign.