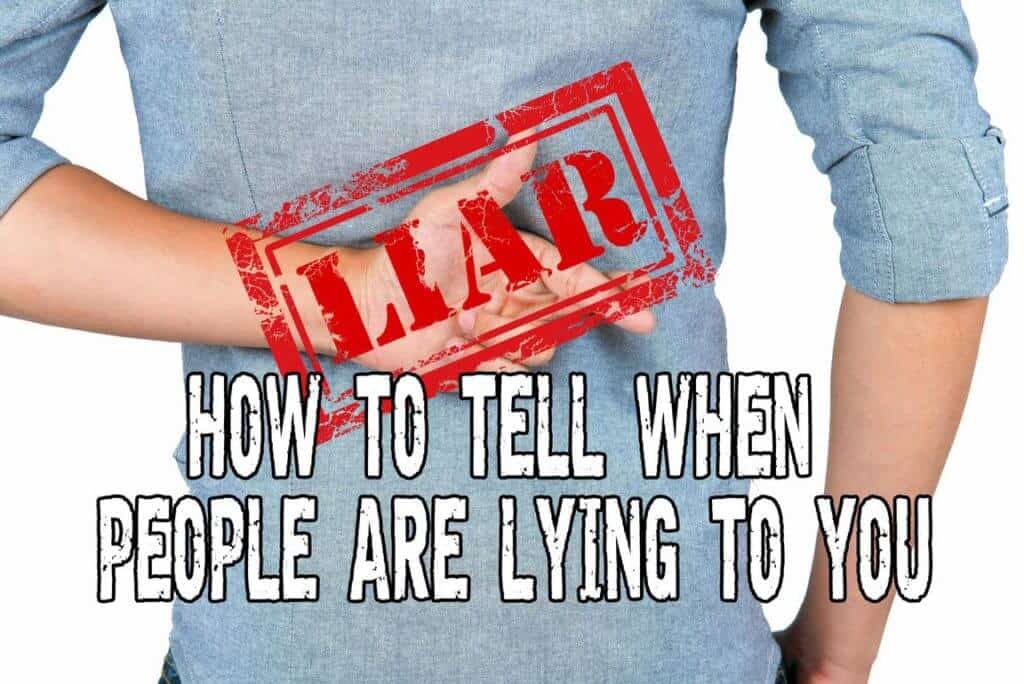 Being able to recognize deception in a post-SHTF world can actually save your life. If you can tell when people are lying to you, chances are you can turn things around. The ability to determine if someone is honest or not is a great skill to have and use to your advantage.

In this world of ours, we are fed lies on a daily basis, and we sometimes fail to make a distinction between what’s real and what’s not. Salespeople, neighbors, infomercial hosts and pretty much anyone you can think of will try to deceive you.

To help you survive when SHTF, it’s better to master how to read people. It would be difficult to turn yourself into a human lie detector overnight, but you should at least know the telltale signs.

Why are people lying to you?

Contents hide
1 Why are people lying to you?
1.1 Related reading: The 10 principles of efficient family survival
1.2 Indications which show you when people are lying to you
1.3 The Eyes
1.4 The Hands
1.5 The Mouth
1.6 Various twitches
1.7 The Throat
1.8 The voice
1.9 When words are against you
1.10 A final word
1.11 Other Useful Resources:

The answer to this question is complicated, but the reality is that the psychology of lying is deeply embedded in your behavior. It’s impossible to determine how the concept of lying was invented and how humans came to its discovery. However, one thing is sure, being able to lie helped humanity survive and take advantage of ambiguous circumstances.

You can imagine that people are lying to you just to reach their goals on a daily basis. Whether they are trying to get a dollar from you or feel better about themselves, they all lie. Think about what would happen if they would become desperate during a survival situation. The government will lie about how the situation really stands, your neighbors will lie about their supplies, strangers will lie about their real motives or bartering goods and so on.

Luckily, some movements, gestures, postures and statements can help you figure out when people are lying to you. It’s up to you to determine which lie indicators work best for you and how to spot them easily.

I have to warn you that there are some cases in which it would be tough to determine when people are lying to you. Some professional liars undergo specific training to perfect their lying mechanisms and control their emotions. Besides those, some pathological liars live in their own made-up world. For these two categories, it is quite hard to trigger or identify an automatic physiological response. For the others, you can observe reactions such as:

Indications which show you when people are lying to you

Unless you have to deal with agents from specific agencies, you should be able to easily spot a liar. I’ve mentioned about government agents because these operatives are trained to block physiological changes generated by anxiety or fear. A regular Joe will just try to keep a poker face and hope things will work out in his or her favor. Speaking of poker, you’ve probably seen poker players wearing dark sunglasses during high-stake games and wonder what’s up with that. They do so to cover their eyes and prevent other players from detecting eye movement.

Let’s look at all the lying indicators that are triggered by a physiological response.

Our eyes are perhaps the most straightforward indicators to detect when someone is lying to you. Besides the fact that there is almost no eye contact when people are lying to you, there are also some other behaviors to spot a liar. For example, an increase in blinking, which is an unconscious behavior, could indicate lying. If the person you’re talking with you is looking up to the right or up to the left, they are probably lying. When it comes to lying, the eyes are key to the emotions, and few people will be able to maintain eye contact when lying.

When people are lying to you, sometimes they will cover their mouth with their hands for a brief moment. Even more, they will repeatedly put their hands near their mouth. They will scratch their beard, imitate yawning or do all sorts of gestures that are not natural during a typical conversation. Wringing of hands and nervous, sweaty, and clammy hands are all indicators of deception. To control their anxiety, they will try to keep their hand busy. This often means interacting with objects in front of them or on their body (pockets, watch, etc.).

Some people experience small twitching motions at the corners of their mouth or upper lip when they are untruthful. If they are aware of this behavior, they will try to cover their mouth using the hands. Mouth twitching is quite hard to spot and you need to pay attention to the mouth of the person, which may look weird if you focus too much.

Although twitching is a problematic indicator to read clearly, in specific scenarios, it can be a sure sign that the person in front of you is lying. Even though restless movements may be an indicator for being bored or sitting too long, you can identify this behavior after two or three encounters with the same person. At a law firm where my wife used to work, they would organize multiple interviews with job applicants before hiring them.

They would place a pen or other objects in front of the person and observe his or her behavior. During sensitive question, the persons would often play with the pen or move it around. They would also let them wait for 10 minutes or more, just to observe their behavior and body movements. These signs will often help them to identify if the persons are lying later during the interview.

Heavy smokers will put you in difficulty with this one. When people are lying to you, throat clearing and verbal hesitation are clear indicators of possible lying. If the person in front of you knows he is lying, he will clear his throat to modulate his voice. This tells you that he is about to feed you some casual B.S. As I said before, if you’re talking with a cigar smoker, this sign can easily be misinterpreted. To be in the clear, ask the person in front of you if he’s a smoker.

Suggested reading: How to teach your children about emergency preparedness

When people are lying to you, their voice will most often change. The voice can go up an octave or two when people are under tension. When I had interns working for me, they would sometimes screw things up and would often try to cover it or blame someone else. I always managed to tell when they were lying to me because the basic timbre of their voice was changing without their control. This happens because the muscles in the throat have the nasty habit of tightening when we are under pressure.

When words are against you

This is perhaps the easiest lie detector of them all and one needs to listen carefully to the person in front of him. Surprisingly, people get away with lies because we have become more distracted and we have a hard time focusing on human interaction. The content of the sentence and how it is structured can be ideal indicators of lying.

When people are lying to you, they will often try too much to convince you. They go above and beyond to reassure you that their statements are truthful. If you are not convinced, just say “I’ll get back to you on that” and see how they react. If they become pushy, you have your answer right there.

Even more, during a long conversation, things may not add up. The longer they go at it, the more they will forget to match numbers up (“I talked with my boss and we need one week to get it done”…”yeah, it shouldn’t take more than ten days for our team”). Only a professional liar will be able to match everything and improvise with the numbers and statements he rehearsed with.

Being able to tell when people are lying to you takes some detective work and a quite some practice. If you interact with a lot of people on a daily basis, you should be able to observe various behavior indicators. It’s all up to you how you read and evaluate what people are saying and call them on their B.S. The most important thing to keep in mind is that you need to maintain eye contact. Be sure to check what the individual is doing verbally and physiologically, to spot a lie more easily.

Becoming a human lie detector will come in handy during an emergency when people would be hard to trust. During those times, any encounter could be a dangerous one and you should be able to spot deception before things take a turn for the worse.

This is How Our Ancestors Managed To Survive Without Technology