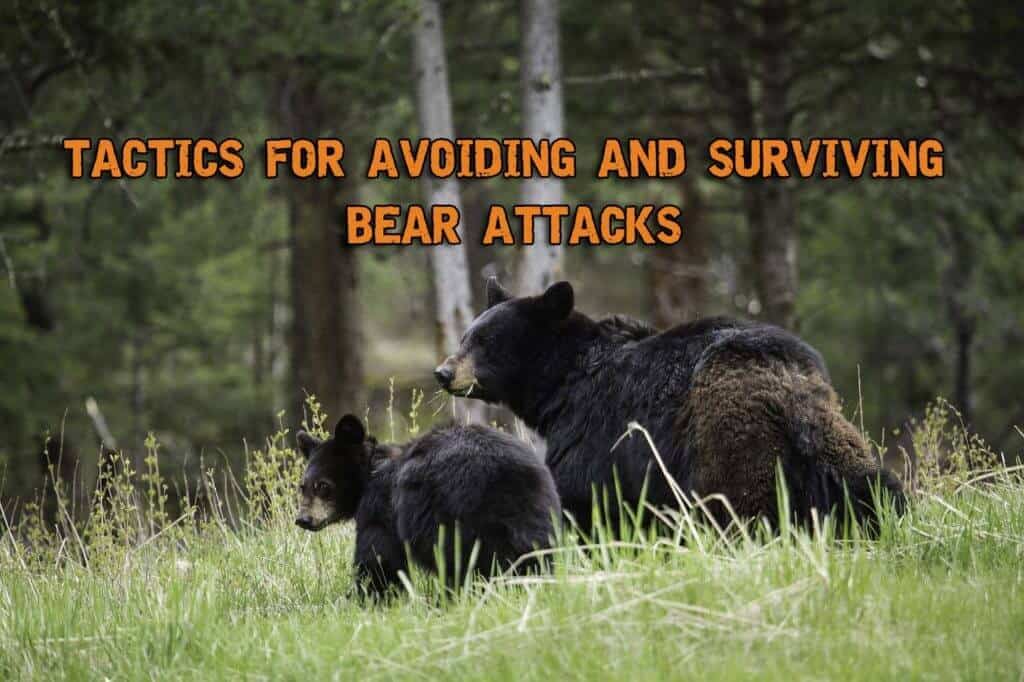 An in-depth look at the Black and Grizzly Bears and the potential danger they may present to the outdoor enthusiast. Suggested precautions and procedures for avoiding and surviving bear attacks and minimize the possibility of death or injury in a chance encounter.

The Black Bear is found in 40 of the lower 48 states, Alaska, northern Mexico and in every province of Canada with the exception of Prince Edward Island. The Grizzly Bear is restricted to Alaska, the North-West Territories, Yukon, British Columbia, Alberta and parts of Montana, Idaho, and Wyoming. Both bears’ behavior is complex and often unpredictable. Consequently, it is extremely difficult to give appropriate advice to follow in all situations.

The Grizzly Bear is documented to have been involved in major incidents resulting in injured persons, mainly in the national parks. It is interesting to note that 80 percent of the attacks involved only single people and 20 percent involved two or three people. There was no evidence that larger groups had been attacked.

An analysis of these attacks reveals that 71 percent of injuries inflicted were by a mother Grizzly Bear with cubs. A more detailed examination of statistics reveals evidence of changing Grizzly Bear behavior.

An examination of the Black Bear attack statistics showed that of the deaths since 1900, only in few cases bodies showed indications of being used as a food source by the attacking bear. Half of the victims were people under the age of 18, and this is strong evidence to suggest that the majority of fatal attacks were from bears regarding the human as a food source.

In over 500 incidents of Black Bear attacks in National Parks between 1980 and 2000 documented by the forest park rangers only three cases required hospitalization beyond 24 hours. Outside of the parks, there were less than 10% of cases of serious injury were recorded.

Obviously, it is a very small number of Black Bears which have reached the behavioral stage of preying on humans. Why this change? Predator bears are always shot, and examination of remains reveals no explanation—they are not rabid, starving or in poor condition.

Suggested reading: The Seven Principles of Safe Camping When Bugging Out

One possible explanation is the increasing pressure on the bear population from people hiking and camping in the wilderness. Previously a greater number of the people in contact with bears were hunters, and the animals were conditioned to fear man.

Although the number of Black Bears behaving as human predators are extremely small, is there the possibility it will increase? Furthermore, will the same type of behavior manifest itself in the Grizzly Bear? This latter prospect is at least disconcerting since the Grizzly is quite a different creature, much more powerful, much larger and even more unpredictable with a notoriously bad temper.

It is crucial to be able to distinguish between the Black Bear and the Grizzly Bear, especially in areas where they have adjacent or common habitats. The overall color of a bear’s fur is not a reliable means of correctly identifying the species.

A Black Bear may vary in color from black through all shades of brown to cinnamon and even blond. Two useful identifiable characteristics are the white or off-white chest patch and the light colored snout.

Black Bears vary in size according to age and gender. A mature male may weigh up to 700 pounds, while a female may vary between 200 and 400 pounds. Size, therefore, is not a really accurate criterion for distinguishing between a Black and a Grizzly. The Black Bear is more agile than the adult Grizzly and it is able to climb trees.

Although the overall color of a Grizzly Bear varies as much as the so-called “Black Bear,” the tips of hair around the neck, shoulders, and flanks are often flecked with white, giving the bear a “grizzled” or silver-tipped appearance.

The two distinct features of the Grizzly Bear in the side profile are its distinct shoulder hump above the forelegs and the disc-shaped concave nose profile. From the front view, it has a distinct mutton chop jowl. The front claws of the Grizzly are much longer (1.5 to 3.9 inches) than those of the Black Bear.

Also, the weight and size of the Grizzly vary tremendously according to age and gender as a mature male weighs between 300 and 1,300 pounds and the female between 200 and 600 pounds. It is important to remember that when a Black Bear drops its head below the shoulders, a hump becomes apparent, but it is not as prominent as a Grizzly’s hump.

Bears may hibernate in their winter dens from two to seven months, depending on the severity of the winter. The hibernation period is spread between November and May. In hibernation, they may lose 15 to 40 percent of their body weight, and the females will have nursed their offspring (usually two) after birth in mid-January. The bear’s main occupation during the spring, summer, and fall is eating, recovering from hibernation, and laying up fat in preparation for the next winter.

Knowledge of a bear’s eating habits and food sources is invaluable in avoiding them in the wild. In the spring, bears will seek food on early “green up sites.” e.g., in western Canada, south-facing avalanche slopes and sub-alpine meadows, which am snow free early and are favorite sources of food. Sources of food would include grasses, wildflowers, roots, bulbs, and tubers. This diet may be supplemented by carrion and ground burrowing rodents. As spring moves to summer, bears may move from the south- to north-facing slopes following the “green up” cycle, since the new growth tends to be higher in protein content.

Related article: How To Identify An Animal Sign When Trapping

The best advice is to recognize abundant food sources and avoid them as possible bear sites. Throughout the summer, insects, larvae, grubs, and eggs, as well as wild honey, provide a source of food. Both species take live and dead mammals if they are available, e.g., newborn ungulates in the late spring and early summer.

Fish may be taken throughout the year, consistent with the time of the local spawning or run. In late summer and early fall, both species fatten on berries—huckleberry, salmonberry, crowberry, bearberry, buffalo berry, cranberry, strawberry, devil’s club, etc. Stay away from large berry patches at this time of year. Foods favored by the Grizzly Bear include willow, catkins, horsetails, buffalo berries, and bulbs, tubers, roots—plants which contain nutrients for the coming season’s growth.

Foods favored by Black Bears include dandelion heads, the cambium layer or sapwood of trees, salmonberry, devils club, cow parsnip, and angelica. It is beyond the scope of this article to provide illustrations of all these plants, and it is recommended that the readers become familiar with them by studying the relevant botanical field guides.

If one can find a clear imprint of a bear’s tracks, the following simple measurement, using some sort of straight edge, will determine whether the tracks are those of a Black or Grizzly Bear. Line the straight edge up with the base of the big toe track and along the top of the pad imprint. Upon extending this line, if it should pass below the mid-line of the small toe print, the tracks are those of a Grizzly.

If the extrapolated line passes above the mid-line of the small toe, then the tracks are likely that of a Black Bear. The freshness of the tracks may be deduced from their clarity of imprint, the hardness of the ground and recent weather changes. Tracks of a family (mother and cubs) indicate a high danger potential since many of the bear attacks arise from a mother defending her cubs.

Black bears tend to travel along the lines of least resistance, using game trails, footpaths, roads, watercourses, and ridges. Bears are essentially a more forest-oriented species, seeking small openings when the sun breaks through the canopy to stimulate plant growth as their feeding grounds.

Grizzly bears frequent the snow-free subalpine meadows in high summer but are also quite at home in the less open environment where meadow and forest meet. The cover is sought more particularly by the black bear for shade, shelter, and bedding.

It is difficult to differentiate between Black Bear and Grizzly bear droppings, although the droppings themselves may give backcountry dwellers a clue as to the bear’s whereabouts:

Occasionally, trees on well-used trails may be marked by bean, perhaps as a means of communication or delineation of territory. The damage may be extensive and obvious, or a few scratches and claw marks which are detected by close examination of fresh running sap. Both Grizzly and Black Bears overturn rocks and tear old rotting logs and stumps apart searching for insects and grubs.

The digging up of roots, bulbs, tubers and small ground-burrowing mammals (marmots, chipmunks, and squirrels) is usually more indicative of Grizzly Bear activity. The size of the digging may vary from a single scoop to an area extending to several hundred square feet. The age of the digging may be determined by examining the state of the vegetation buried by the excavated earth and the freshness of the earth itself.

In the second part of this article we will see how we can manage our campsite and how can we face encounter to prevent bear attacks.

This article has been written by Dan Mowinski for Prepper’s Will. 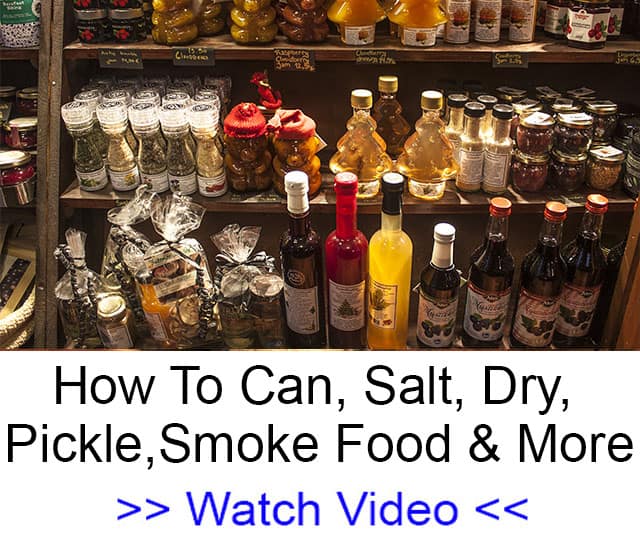