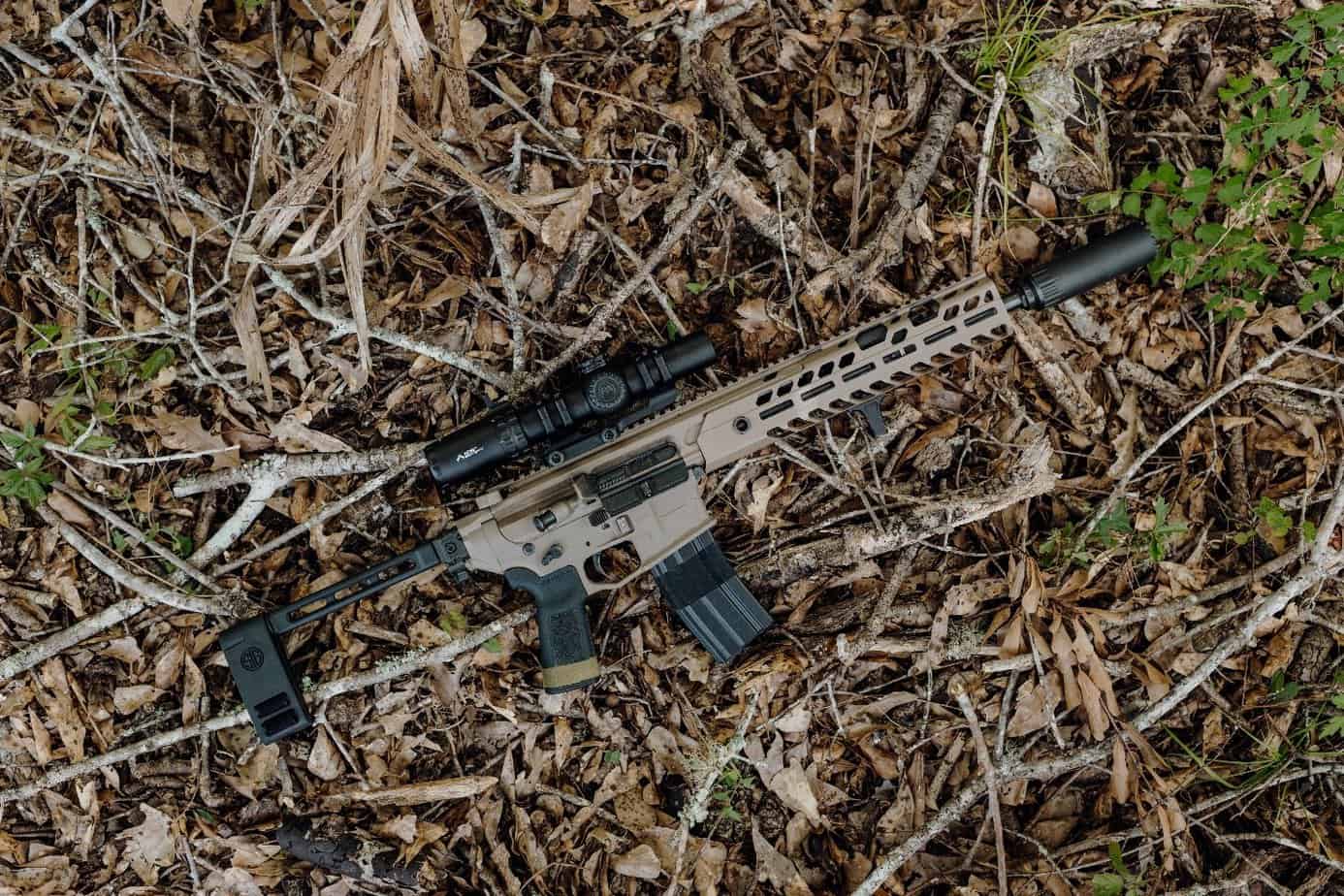 When it comes to firearms, like an AK-47, there are few features as cool, and more than often useful, as the ability to fold. Whether it’s for storage in your bug-out bag, concealment, or being able to use the firearm in a wider variety of scenarios, the ability to fold in some way is a great feature used in a large range of firearms designs.

In this piece, we’re going to look at some examples of what we think are the best folding firearms. For each, we’ll start with a brief description, and from there talk about the ideal use-case for each weapon, as well as some of the potential drawbacks.

Let’s start off with rifle caliber folding guns, as the cartridges themselves are extremely popular.

However, there are some trade-offs for using a rifle calibers. Rifle calibers like the 7.62 or 5.56 NATO require a longer barrel to burn the gun powder resulting in the velocities that make these rounds great.

For example, the 5.56 NATO round starts significantly losing velocity once you have a barrel shorter the 10.5 inches.

This means these will not be able to get as small as some pistol caliber folding guns that do not require the same barrel lengths.

Each category will have trade-offs, but I’m sure you will be able to find something that fits your needs. 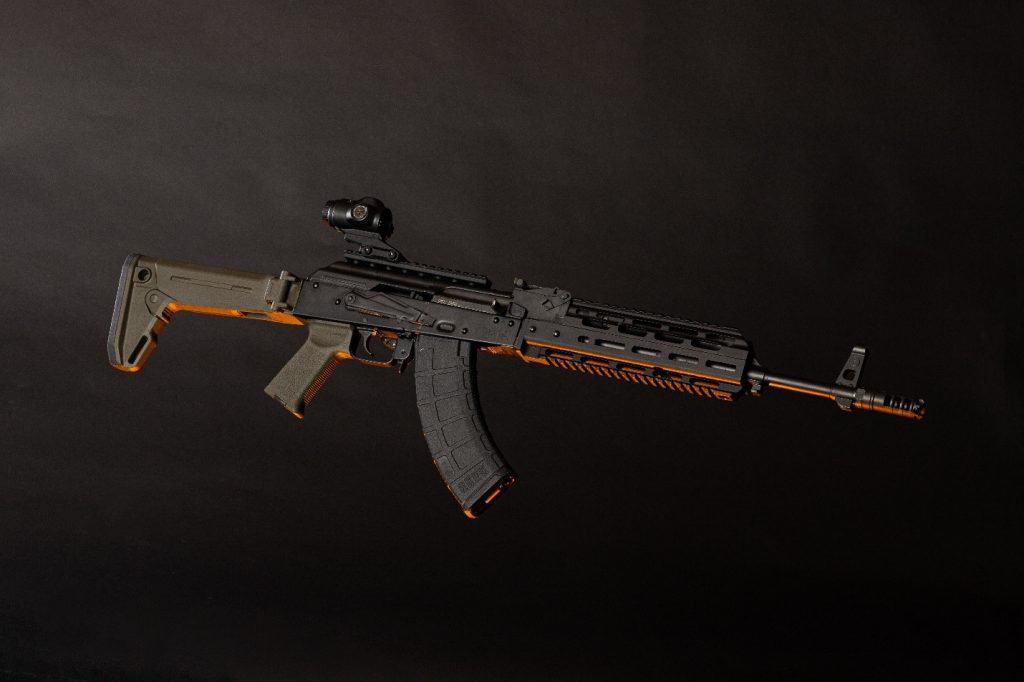 This is kind of a broad category, but we want to mention folding AK models as they provide an interesting answer to a question that a lot of nation-states were asking during the Cold-War era: what’s the best way to arm tank crews, truck drivers, and so on?

The Americans struggled with this for decades and still do: the AR-15 cannot easily fold without disabling the buffer tube, meaning that you can’t fire a direct-gas impingement AR when it’s folded.

This is fine for storage but no good whatsoever for the aforementioned vehicle crews who might not need to fight as their job, but may very well have to do so on very short notice when in a combat area.

AK folders range from old AKMs with wire stocks to new models with the newest, polymer future. While we’re always fond of historical models, there is a major downside: those old folding stocks hurt to shoot!

If you plan on using an AK folder for more than occasional shooting, then we’d recommend a model that comes with a new, preferably polymer stock that makes it a lot more comfortable on your shoulder.

A recent innovation to the AR-15 platform is the FoldAR. 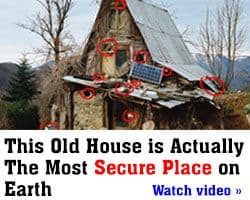 The FoldAR uses patented technology that allows you to fold the barrel of the gun along with the stock. This “double fold” technology allows for a very compact form factor aiding in storage and transport.

With a folded length of only 10.75”, this can easily be stowed in your vehicle or go-bag. It is to be noted that just like mentioned earlier the FoldAR cannot be fired while folded.

It still utilizes the tried-and-true direct impingement system as most AR’s do. This means the buffer tube must be folded out, and obviously the barrel, to be fired.

The FoldAR is offered in a couple different models varying in barrel lengths and chamberings, such as both 5.56 NATO and 300 Blackout. With longer barrel lengths, this really makes for a great hunting rifle that can be stored in your bag while hiking out to your favorite hunting spot.

However, if you are looking for an easily concealable “bug-out” style of gun, they offer a model in .300 Blackout with a 9-inch barrel. The combination of the .300 Blackout round and a 9-inch barrel provide an excellent home or personal defense weapon with amazing ballistics.

While the inability of being able to fire while folded is still a drawback, deployment of this system takes a matter of seconds. The buffer tube can be folded with a push of a button, and the barrel and handguard uses a latch system to provide tight lockup and rapid deployment.

We have all seen that you can add a folding stock adapter to most AR platform rifles, but that only solves half of the problem. The ability to fold the barrel really widens the storage and transport options. Also, with this being an AR, the aftermarket support is great.

If you already own an AR platform, you know that they are termed the “adult Legos” for a reason.

While pistol calibers are less powerful and have more limitations for their uses than a more powerful round, they require shorter barrel length and often have simpler operating systems. This is beneficial in terms of their folding ability.

While they may be less powerful, the trade-off is a smaller, more concealable package. 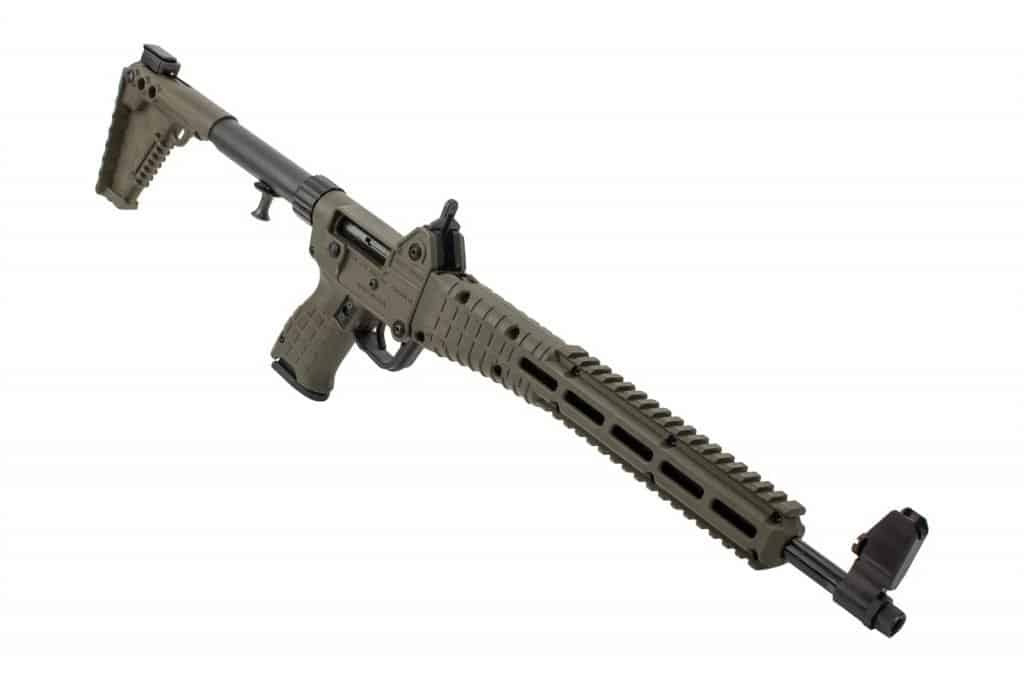 The Sub2000 is easily the most recognizable firearm on this list and the one that popped immediately when thinking about folding firearms. The Kel-Tec Sub2000 is a simple blowback carbine that folds very nearly in half and is made with one of the simplest designs in modern firearms.

These carbines, which take widely available M&P magazines in either 9mm or .40, depending on the model you select, are ideal for backpacking and can be pressed into use for home defense if necessary.

Even though it would make it a little less light and compact, adding a red-dot sight to this gun makes it capable out to surprisingly long ranges with a little bit of practice.

In our minds, this is an ideal gun to take camping or hiking, where it would stay folded in a backpack and not take up much room, only needing to be used as a defensive weapon.

The Sub2000 does not have the range or power to make it a hunting rifle by any means, but it’s certainly better than using a strongly worded insult to scare off a bear or a robber.

It’s also endearing in a way we can’t quite explain in terms of its simple, plastic appearance.

The newest version of the Scorpion might well be our favorite Personal Defense Weapon (PDW) of the last decade.

With the updates in ergonomics and furniture, the Evo 3 handles well, shoots even better, and is a more than capable self-defense firearm that’s also a ton of fun to shoot at the range.

The fact that there are now a few companies that make folding stocks also earns the Scorpion a spot on this list. Thanks to the simple blowback design of the firearm, it can be fired with the stock folded as well.

This makes it, in our view, a great firearm to keep folded by the side of the bed or in the closet as a self-defense weapon.

With a red-dot sight on top, it is feasible to grab it while it’s folded and make good use of it as, basically, a large handgun. If you have a moment, though, flipping the stock out will give you more points of contact and, thus, more accuracy.

The only downside to this idea that we can see is that if you intend to shoot it without shouldering the stock, it is a little bit on the heavy side as an oversized handgun. 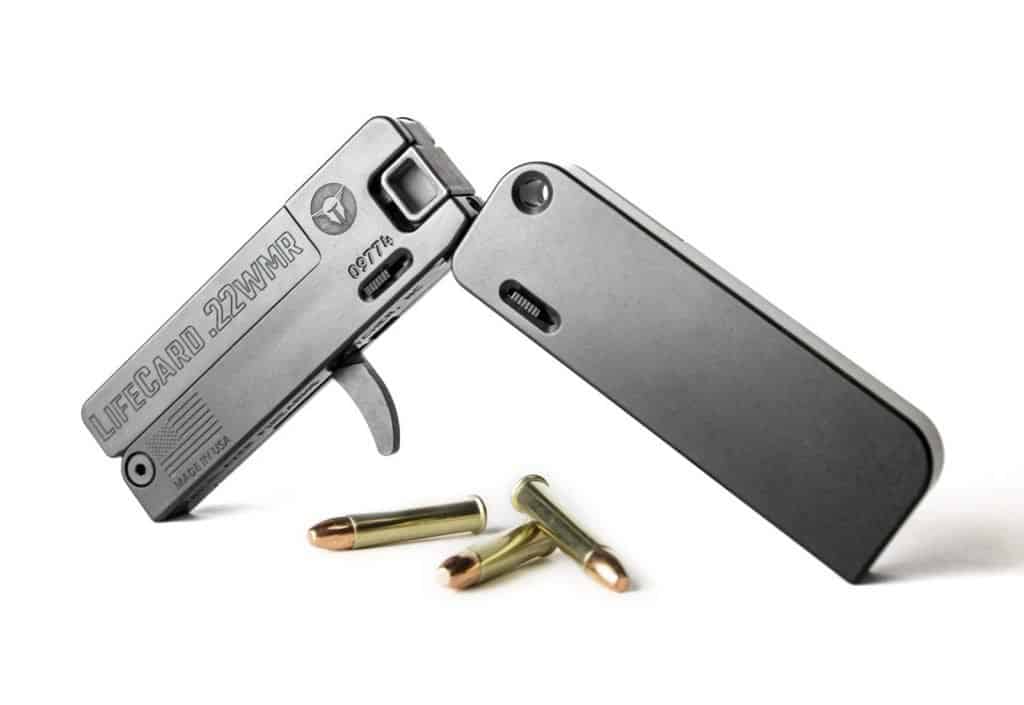 The LifeCard is a single-shot .22. Is it a good firearm? Not really. Is it accurate? To about five feet. Then why on Earth is it on this list?

It is one of the most compact firearms on the market today and, when folded, is only about as thick as a stack of credit cards. This makes it possible to safely pocket carry it in a wide variety of conditions, even when you might well leave other firearms behind.

Obviously, a single-shot .22LR handgun with mediocre ergonomics and no real sights to speak of will not be your primary concealed carry gun.

But, as either a backup gun, one to toss in your pocket when running, or a last-ditch self-defense tool, it has its place. We might not put a ton of rounds through one for fun, but having the ability to defend yourself with more than a stern look is certainly valuable.

This is the smallest firearm on this list and has an innovative design: for those two reasons alone, the LifeCard is at least worth taking a look at if you’re in the market for a folding firearm. It’s also something that will likely stand out in any collection.

As you can see, the want to fold a firearm is one that spans calibers and types: from a .22 credit card to an AKM, it’s possible to get most kinds of firearms that fold. Interestingly, even though all of these guns fold, they don’t all fold for the same reasons.

Some fold for storage, others for use in tight quarters, and some fold as basically their whole safety and carry procedure. It is very interesting to see all the different solutions these companies have found to meet the needs and wants for folding firearms, but which is your favorite?

Whatever kind of gun you want, then, chances are you can find one that folds if that’s a feature that interests you.