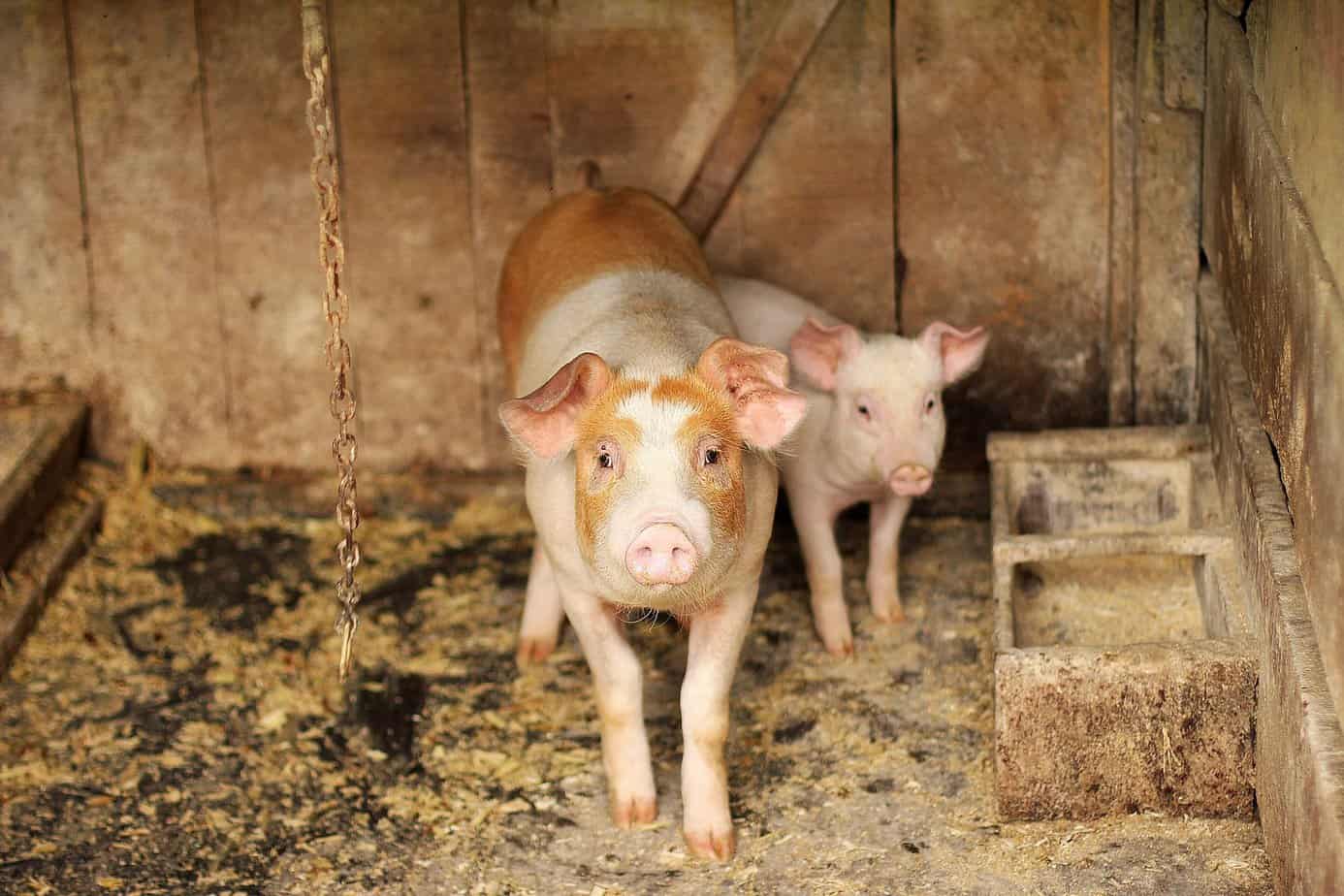 From the first pigs introduced by Christopher Columbus and Hernando De Soto up until 50 years ago, hogs in America were a diverse lot. Breeds from all across Europe and the Far East were imported by various cargo ships that docked along the East Coast.

These hogs were mostly high-fat, slow-growing breeds—a commodity for cooking and lubrication. Once here, the hogs were basically left to roam, foraging throughout the woods and pastures for grasses, soft and hard mast like berries and hickory nuts, occasional grubs, and other odds and ends.

This daily foraging helped pack tiny fat marbles throughout the pigs’ muscles. Each season brought new feeds, and the essence each source imparted helped layer flavors throughout the meat.

Contents hide
1 Breeding history
2 The government steps in
2.1 The resurgence begins
3 Breeding for perfect hogs
3.1 Heritage-breed hogs you should check
4 A Top-Shelf Taste 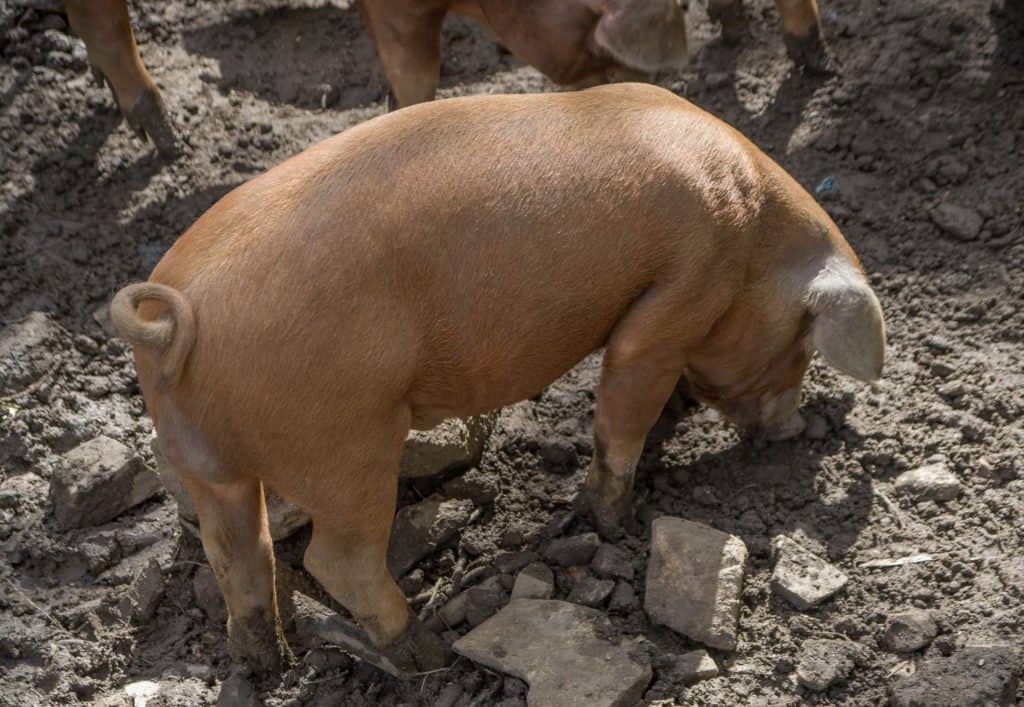 Around the 1800s, farmers began importing specific breeds relative to their geographic regions. These pure-bred hogs were mated with the best naturally selected hogs each area had produced, and new breeds emerged.

In time, breed numbers established main lines that fulfilled both producer and consumer needs, and were refined until the characteristics bred true from generation to generation. Some of the more popular examples became household names.

For 100 years or so, American farmers used these and other breeds including Duroc, Hampshire, Yorkshire, Poland China, Chester White, and others to breed pigs with the characteristics their local consumers desired. These pigs typically featured dark, well-muscled red meat with a fairly thick fat cap. Unfortunately, these delicious characteristics aren’t common in grocery-store pork. Here’s why.

The government steps in

In the ’60s and ’70s, the federal government decided leaner pork was better from a health perspective. It began paying additional premiums for pork that met leanness standards. To capitalize on additional profits, pork farmers started breeding for rapid growth and lean muscle.

Furthermore, an advertising blitz by the Pork Council convinced American consumers that lean pork was best. As pork across the board met governmental standards, new standards calling for even leaner meat were implemented.

Meanwhile, massive factory farms realized they could house up to 2,000 sows inside giant metal barns with concrete floors. These pigs were bred to grow fast and lean, and never allowed to move around and build intramuscular fat.

Pale, lean and nearly flavorless meat that passes as “quality pork” at most grocery stores today.

To do this, they’ve resurrected heritage breeds—some on the verge of extinction—and have begun crossbreeding to produce desirable characteristics.

Bob Perry, chef in residence at the Department of Agriculture for the University of Kentucky, has studied these heritage breeds and the pork they produce.

“The heritage breeds are nothing like commodity pork in taste or anything else, and people must stop comparing heritage to commodity, especially on price,” Perry said. “They cost more to raise, and thus cost more to the consumer. No one looks at a Porsche and expects to pay the same price as a VW.” 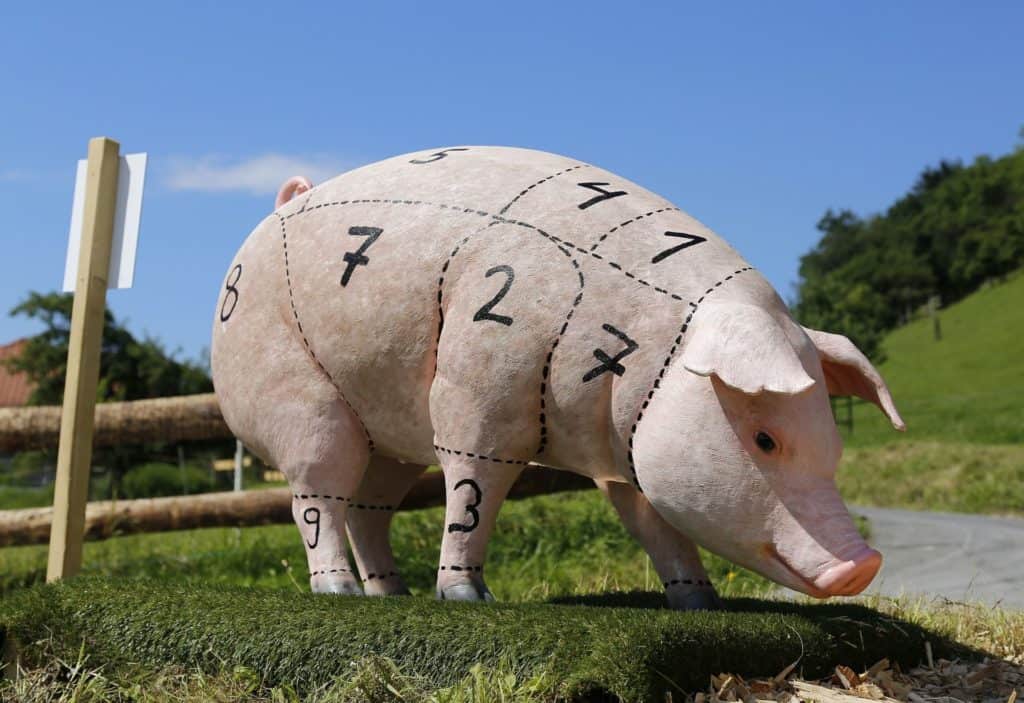 Perry said the husbandry used to determine the breed cross for particular pieces of pork must be influenced by end-use. For example, the cross that produces the best dry-cured prosciutto doesn’t necessarily produce the best-grilled pork chop.

To that end, breeders are producing crosses not seen in America in decades. Today, you can find Iowa Swabian Hall pork, a breed developed in the early 1800s for King Wilhelm I of Germany.

Because pure Swabians aren’t exported, breeder Carl Blake replicated the breed in the U.S. by crossing European and Ossabaw boars with Meishan sows.

The resulting breed boasts dark red meat colored similar to beef. The pigs also feature heavy intramuscular marbling—similar to the famed Wagyu beef—and a 2-inch-thick fat cap over the loin and back. This is accomplished within 9 months.

We’ve sliced steak from the shoulders of these pigs and grilled them just like you would beef. The results were unbelievable.

Like pork from the past, these pigs are raised almost entirely on pasture and wild forage. The more they exercise, the more they build marble. The pigs are compact with a swayed belly, forward-facing ears, and a black coat. They produce an average of 10 to 12 piglets per litter and are attentive mothers. Their good nature in the field makes them easy to work around.

These hogs are destined to reach high-end restaurants and shops where consumers willingly pay extra and most people want more once they’ve tried it. We’ve tried it and my family agrees it’s unlike any pork we’ve ever eaten.

Besides fresh pork, this breed also produces exceptional cured meats and sausages. The meat cures just beautifully, the fat is so firm and flavorful, and the meat is much higher quality than commodity pork. It takes the cure so much better, and the improved flavor is instantly recognizable.

One breeder striving to produce the market’s highest quality pork is Travis Hood, co-owner of Two Forks Farm and Hood’s Heritage Hogs. The Hoods procured some of the last remaining pure Red Wattle brood stock from the Andrus family in Texas. “I’m pretty sure our farm and another one in Oregon are the only two places left in the country with a breeding population of Andrus Red Wattle,” Hood said.

From this brood stock, the Hoods began experimenting with crosses between the Red Wattles and other heritage breeds, like Tamworth and Hereford, Eurasian and Mulefoots, in an attempt to produce pork perfectly balanced with fat, color, and flavor.

“The Red Wattle/Mulefoot cross produces the prettiest marbling I’ve ever seen,” Hood said. Meanwhile, they also want a hog that produces a large litter, grows quickly to market weight, thrives on pasture and foraging, and has an amiable disposition.

“Some of our hogs are too friendly,” Hood said. “You can’t go into the enclosure without them coming up to you for a belly scratch. It gets somewhat annoying when you’re trying to work on fences or other chores.”

The Hoods direct-market their pork to restaurants and charcuterie chefs. They also sell it directly to consumers at farm markets in the Lexington, Kentucky, area.

Heritage-breed hogs you should check

Known for its distinctive red color and fleshy wattles hanging from either side of the neck, the Red Wattle hog first became popular mainly in the southern United States. It grows quickly, is relatively lean, and forages well on its own. Friendly almost to a fault, the breed is popular among pork producers whose main goal is flavorful meat.

Originating in central England, where they were expected to forage for their food in large forests, these long, lean hogs were imported into America for meat production more than their lard-producing capabilities. Because they grow relatively slowly, they form dense layers of both meat and fat, particularly in their bellies, making them prized for bacon production.

Unlike the southern breeds above, the Hereford was developed in Iowa and Nebraska in the early 1900s. Known for their red-and-white color patterns, Hereford hogs were bred to be docile, fast-growing, and adaptable to climate and habitat conditions. A large-framed hog, the breed was developed mainly for meat production.

Named for its distinctive non-cloven hoof, the Mulefoot most likely descended from similar-footed stock in Asia imported by early Spanish explorers. Mulefoots are prized for both meat and lard production and produce excellent cured hams.

Known for its distinctive black spots on a white coat, this breed derives its name from the English town where it was first documented. Also known as a “cottage pig,” Old Spots were prized for their ability to subsist on forage.

Direct decedents of European stock left on Ossabaw Island off Georgia’s coast in the 1500s, the Ossabaw Island hog still exhibits many of the same traits as European wild pigs. Due to their geographic isolation, Ossabaw hogs were shaped by natural selection rather than the hand of man. The result is a small-framed, lean yet muscular hog that’s able to store large amounts of fat, helping it exist through lean times when Mother Nature offers little.

While the pigs most heritage farmers produce make up only a fraction of American pork, their numbers are increasing. Once people realize what real pork should taste like, they seek it out from producers like these or even begin raising heritage pigs for themselves on small family farms.

Besides providing a much higher quality protein to pork consumers, breeders are preserving these heritage breeds and even expanding their numbers for future generations.