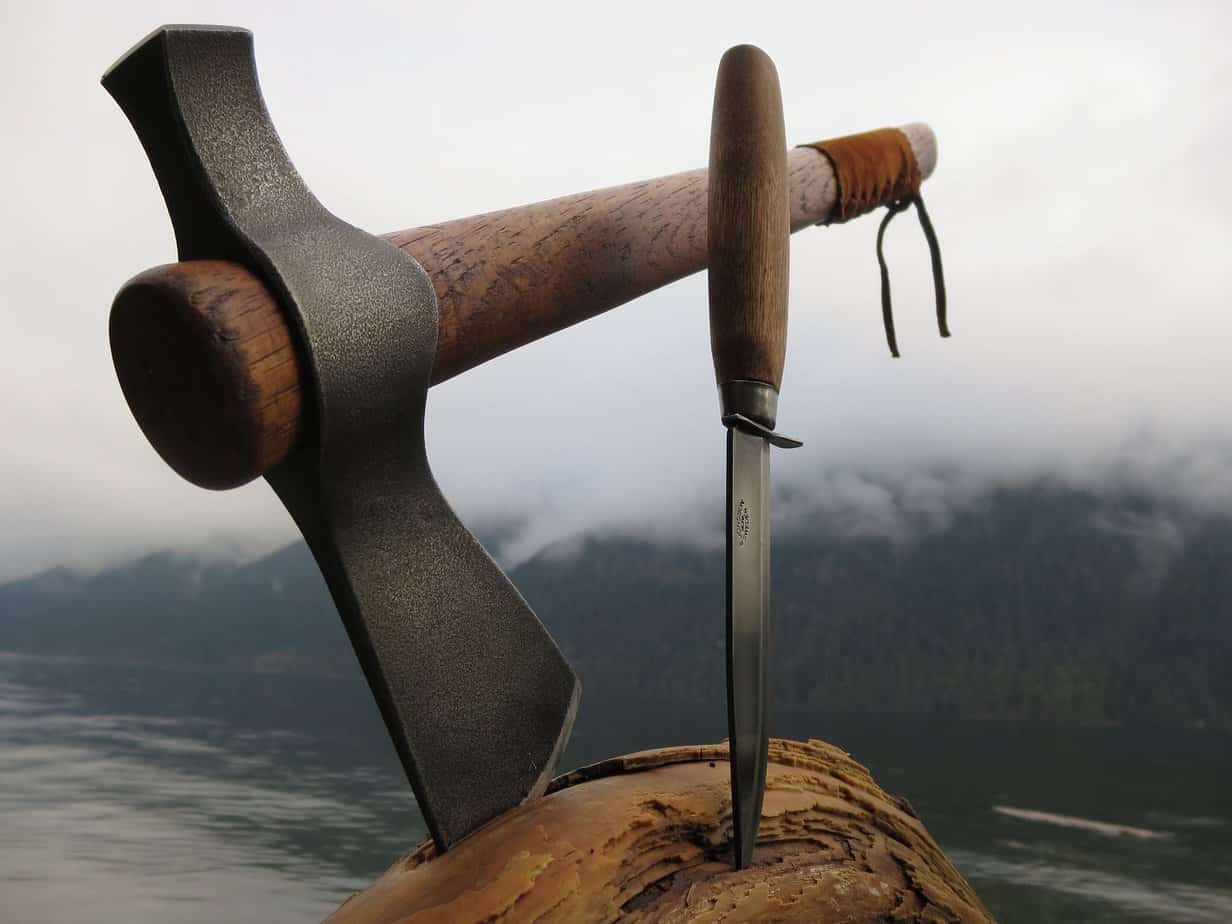 The Tomahawk has been an integral part of the pioneers kit for centuries. It is lightweight and has a handle long enough to propel the relatively light metal head with the right amount of speed to do the chopping and fighting chores it has become famous for in North American folklore, as well as in actual practice.

The combination of a cutting edge on one side with a hammer poll on the other makes it a versatile tool that easily handles chores from chopping to fighting to hunting to fine shaving work on wooden objects.

With a sharp tomahawk on his belt, the pioneer of the 18th and 19th centuries could do pretty much any essential chore that required pounding or cutting. Preceding the innovations from Leatherman by a couple of centuries, the tomahawk was really the first multi-tool.

The history of the tomahawk goes back centuries to the Native Americans of the Eastern woodlands, mainly the Iroquois nation. Initially, tomahawks were made from an ovalor triangle-shaped rock that had an edge on it. 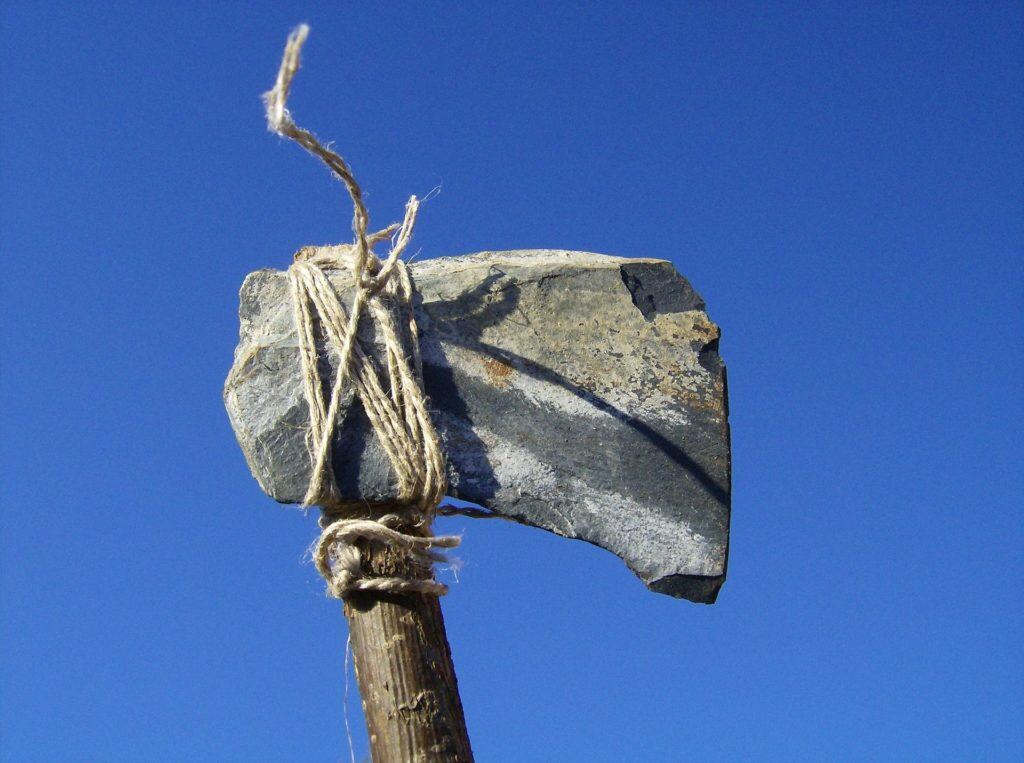 This edge might have been made by natural erosion or by knapping an edge on it. The head was then attached to a wooden handle using sinew, rawhide strips, or other cordage.

Native Americans used them as a daily-use tool for cutting, chopping, hunting and, when necessary, fighting. In the 1700s, European trappers and traders brought metal axe heads with them as trade goods.

These were very popular with the native peoples, as well as the early colonists and settlers, because they were sharper, much more durable and easier to maintain than the stone heads they had been using. (By the way, the word, tomahawk, came from the Algonquin compound word, tamahaac, which signified a tool for cutting.)

As Europeans and the new Americans moved westward across the continent, the tomahawk went with them, finding a place in the kits of pioneers, mountain men and, of course, the Native Americans of the plains.

Today’s tomahawks—or “hawks,” as they are often called—maintain the features that made them so popular and useful to the early pioneers: They can be used with one hand and feature a tapered wooden handle passed through a metal axe head. The latter is heavy enough to cut and chop while being light enough to maneuver easily in a fight.

Hawks are normally lighter in weight than small axes or hatchets; the handle can be easily replaced in the field if it gets damaged; and the head can be removed from the handle for use as a handheld cutting or scraping blade, similar to the Eskimo ulu. This capability is not available with the more-contemporary tomahawk designs.

The modern metal head has a blade on one end and a flat hammer poll and a spike or pipe bowl on the other. It has an oval-shaped hole in its center through which the handle is passed. An important design feature is that the hole in the head is wider at the top than it is at the bottom.

The oval shape keeps the head from rotating on the handle from the impact of hitting or cutting something. The tapered shape of the opening allows the head to slide along the handle, where it wedges in place as a result of the wider diameter of the handle at the far end.

This design also means that all you have to do to keep the head tight on the handle is to tap the top on something hard to wedge it back into place. There isn’t any need to place wedges into the top of the handle to tighten the head on the handle as you need to do with an axe or hatchet.

The tomahawk head is typically 5 to 8 inches long, with a cutting edge of 2 to 5 inches. The handle can range anywhere from 10 to 25 inches long—the longer the handle, the more force being applied.

Tomahawks range between 1 and 7 pounds, depending on the weight of the head and the length and composition of the handle.

Tomahawks vs. Hatches and Axes

First, the metal head is normally lighter on the tomahawk, which makes them easier to carry while still having enough mass to do the intended work.

Second, the tomahawk head is held in place by friction on the handle, rather than by a wedge driven into the top of the handle, to force it outward and press against the axe head.

Third, the tomahawk handle is generally not as long as a full-sized axe but is longer than the handle of its closest cousin, the hatchet.

A Plethora of Uses 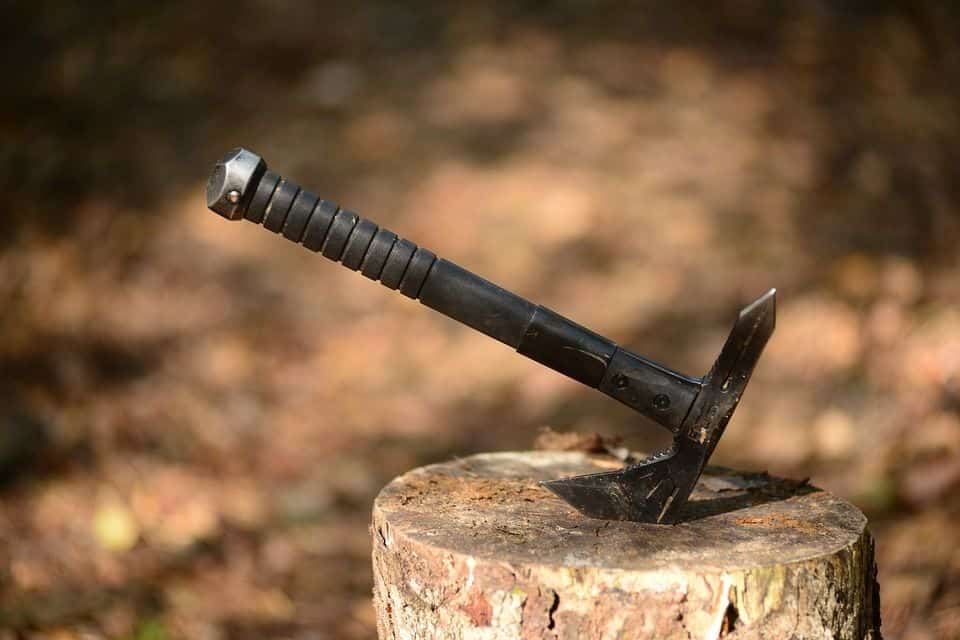 Because of a design that has evolved over the centuries, the tomahawk is a very useful and versatile tool. As a lightweight axe, it can do everything you need to build a shelter, cut saplings for poles, trim tree branches for roofing, make pegs or drive poles into the ground.

Its sharp edge can be used to cut up wood for tinder and kindling to start a fire and then process larger branches to keep it going. It can make fuzz sticks to help start the fire; alternatively, it can be used as a striker with flint or a ferrocerium stick to provide sparks to start a flame.

As hunting or trapping tools, tomahawks are used to split pelvises and separate joints when field-dressing and processing game animals.

They make quick work of removing the extremities on small game such as squirrels and rabbits. The metal head, which can be used either on the handle or removed and used directly in the hand, can be used to skin an animal, butcher the meat and process the skin.

In a less-peaceful scenario, the tomahawk was also used as a tool of warfare and self-defense. The usefulness of the cutting edge is obvious in this regard, and the opposite end of the head has either a hammer poll or a spike, which could be used to cave in a skull or punch a deep hole into the brain.

They could also be thrown at an enemy—a technique that is seen more in movies than in life. In reality, the experienced fighter would avoid losing physical control of his weapon at all costs.

The tomahawk models discussed here are all priced under $100, so you don’t have to spend a lot to get a good-quality backwoods tool.

These hawks also feature the traditional design of a metal axe head with a cutting edge and hammer poll that fits snugly onto a tapered wooden handle.

When it comes to your first tomahawk, especially one that does not cost an arm and a leg, Cold Steel is probably the name that most often comes to mind.

The Trail Hawk is just one of a dozen axes and tomahawks in its catalog. The Trail Hawk is an excellent basic hawk, with a 6½ -inch head, 2¼ -inch cutting edge and a hammer poll on its 22-inch-long hickory handle. Its cutting edge is the narrowest of the four hawks reviewed here. It cuts deeper than the wider blades of similar weight.

Also, due to Cold Steel’s simple, but effective, designs, its hawks are frequently the choice when someone wants one they can customize to fit their individual needs or artistic flair. (You can do a quick search on YouTube, which has several videos showing how CS hawks have been customized.)

Each CS hawk comes with black paint over the head. This paint can easily be removed if you prefer to polish it to a bright finish or give it an acid wash patina with vinegar or other mild acid.

The handle is covered with a lacquer finish that can also be removed via sanding and then stained the color you want and cut to the length you prefer. Those who customize their CS hawks often wrap the handles with leather or paracord/550 cord to provide a better grip.

This can be done on the lower part of the handle where it is normally gripped or is applied below the head to cushion the handle in the event you miss what you are cutting and hit the handle instead. 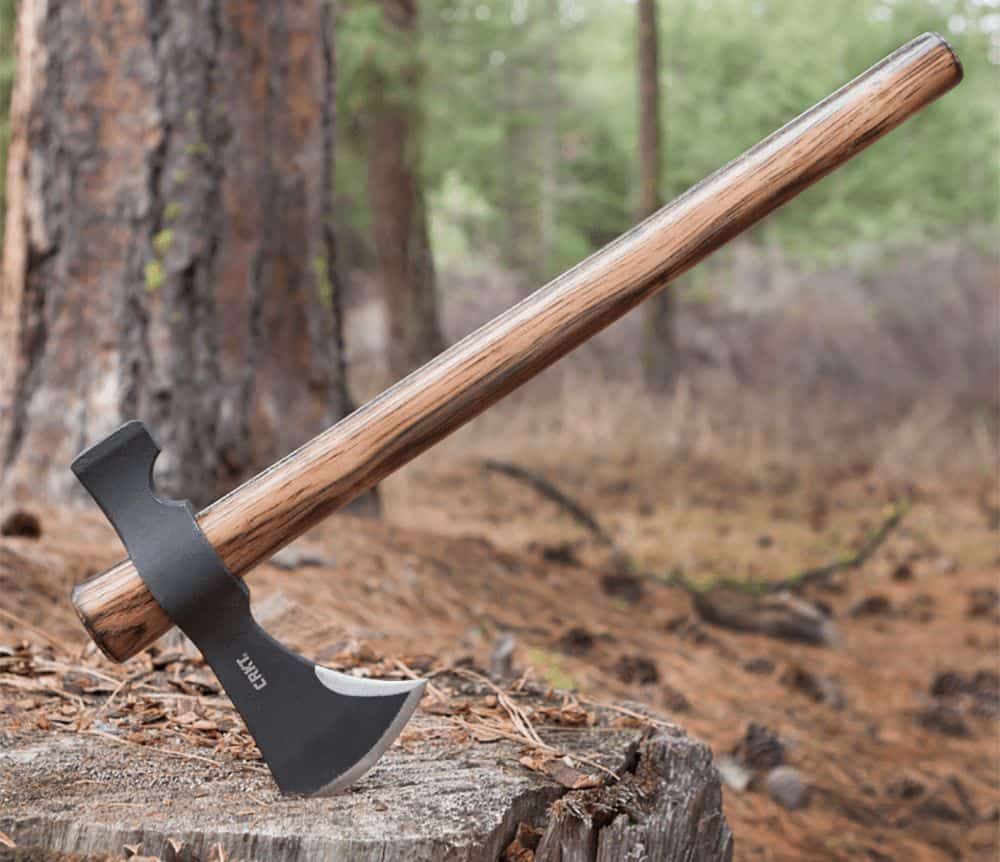 One of four tomahawks in the CRKT product line, the Woods Chogan is my favorite all-purpose hawk of the four covered in this article. It has the heaviest head and the longest cutting edge of the group while still maintaining the traditional tomahawk design, with its replaceable hickory handle, cutting edge and hammer poll.

Formed using the drop-forge technique to shape a metal ingot into the desired shape, the Woods Chogan’s metal is very strong and holds an edge well. The medium thickness of the cutting edge and the edge angle mean that it will not get stuck when it cuts deeply into wood.

This hawk is made for CRKT by Ryan Johnson, owner of RMJ Tactical (the maker of several models of tactical and fighting tomahawks).

This hawk comes sharp and with a polished edge that is differentially heat treated to make the forward edge stronger.

H&B Foundry’s master blacksmith Jarrod Barber has been making edged tools for over a decade in the company’s Ohio workshop. His creations range from tomahawks and hatchets to full-sized axes of all kinds to throwing tomahawks.

H&B Foundry also offers several products for the black powder and mountain man markets. Barber’s medium camp hawk is hand forged, unlike the Woods Chogan and Trail Hawk, which are forged with machinery for the most part. Its curved blade, combined with a 1-pound head on a 17-inch handle, makes it an excellent chopper, cutting deep into branches and small logs.

This hawk came without any delay from the foundry and, unlike some other hawks, has a hand-sharpened edge that is cutting sharp on arrival. The cutting edge is polished and is the deepest of those reviewed.

One look at Ron Laclair, and you know he is in tune with mountain man lore and life. The Shrew Hawk  Tomahawk, which he designed and sells on his shrewbows.com website, reflects his love of edged tools and other items that do what they were designed for well.

The Shrew Hawk is the smallest and lightest tomahawk I know that can still do what is needed in the field and on the hunt. Crafted by blacksmith Carlton Matteo, it features a hammer poll on the rear of the head and a 3-inch-long blade on the front end. A flattened piece of car leaf spring or drill rod is forge welded into the head to form the cutting edge.

This gives it a much stronger cutting edge— which also keeps its sharpness better than most other tomahawks that are available for under $100.

While I prefer a hawk with some more weight in its head for use around camp, such as the Woods Chogan, the Shrew Hawk is the one that gets attached to my daypack for everyday carry in the field as a result of its ability to balance weight, utility and ease of handling in a compact package.

I carried a tomahawk instead of a hatchet when I was a young Boy Scout in the 1960s. As a result of the excellent quality of today’s traditional, hand-forged designs, it found its way back onto my packing list a number of years ago.

The tomahawk was the pioneers’ first real multi-tool. Consider adding one to your kit. With a tomahawk in hand or on your belt or pack, you, too, can cut, chop, pry, shave, slice, pound, dig, puncture, skin, quarter, hammer, split any piece of wood or process a game animal. You won’t be disappointed.

1 thought on “The Tomahawk – A great Wilderness Multi-tool”