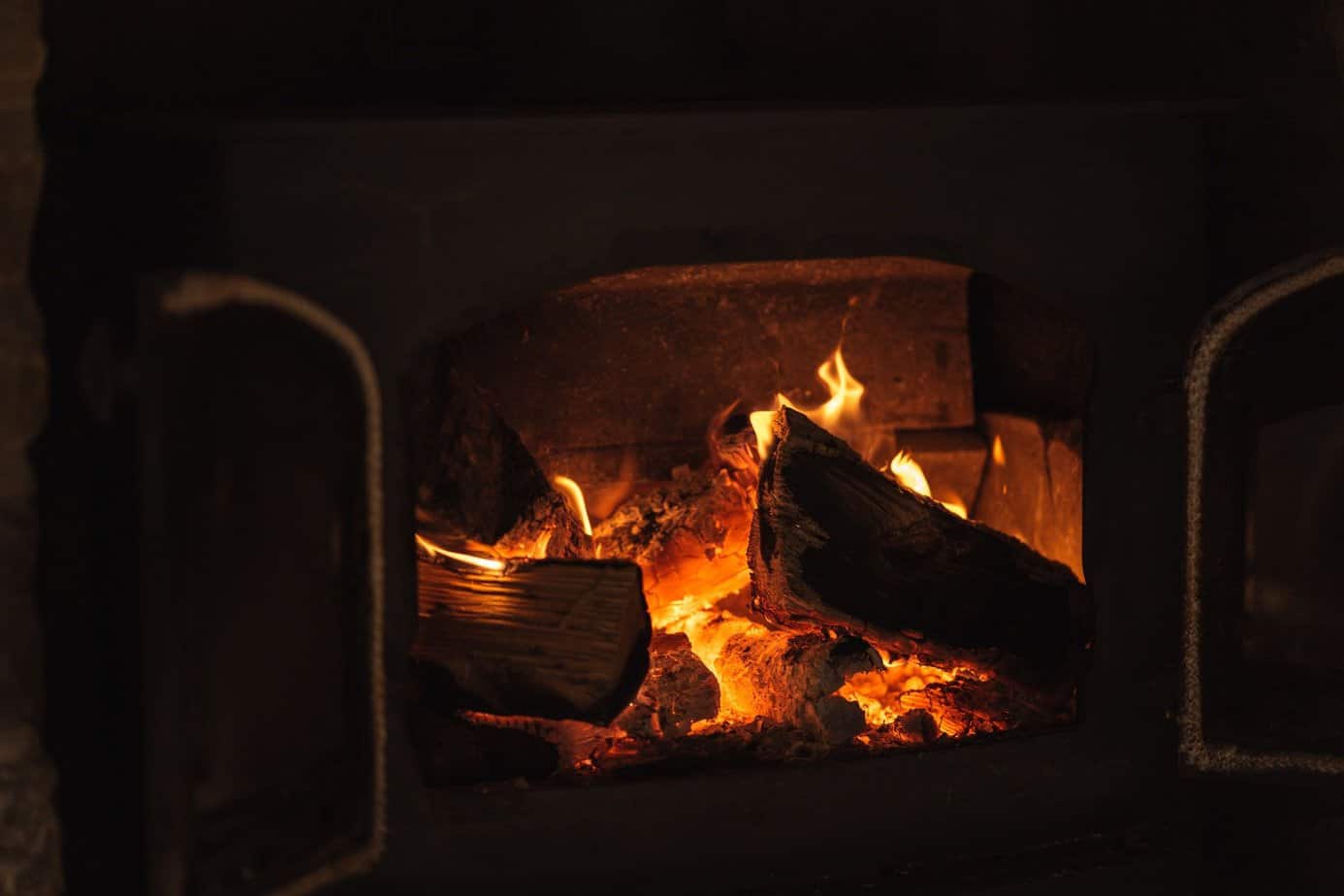 Wood was likely man’s first fuel. How people manage this remarkable fuel, from cutting to heating, varies with geography, culture, and even age. There are a lot of ways to manage your wood heating system, but one thing’s for sure: The system described here works. Storing firewood is also an important task, click here to find out more.

Not all wood is equal when it comes to heat value, which is typically measured in BTUs (British thermal units)— the amount of heat required to raise the temperature of 1 pound of water by 1 degree Fahrenheit.

If you’re buying wood, you’ll typically get a mix of hardwoods, which are at the top of the heap in terms of efficiency. One cord of this clean-burning wood can produce as much heat as 200 to 250 gallons of fuel oil.

While hardwoods as a group provide cleaner and more efficient heat than softwoods, there’s still a hierarchy within the class. If you want control over the species of wood in your stove, you should cut your own.

The only alternative to buying wood is scavenging and culling. Don’t even think about trying to swipe some construction debris; it’s laced with poisonous and odiferous chemicals.

If you’re culling trees from your own woodlot, resist the temptation to cut straight ones simply because they’re easier to split. Go for the crooked and misshapen trees. Consider culling those that are stunted due to so-called wolf trees that form canopies over their neighbors.

And while you’re at it, cut down the wolf trees. Culling the misfits will give your woodlot healthier, faster-growing trees that will be worth more and produce more firewood. 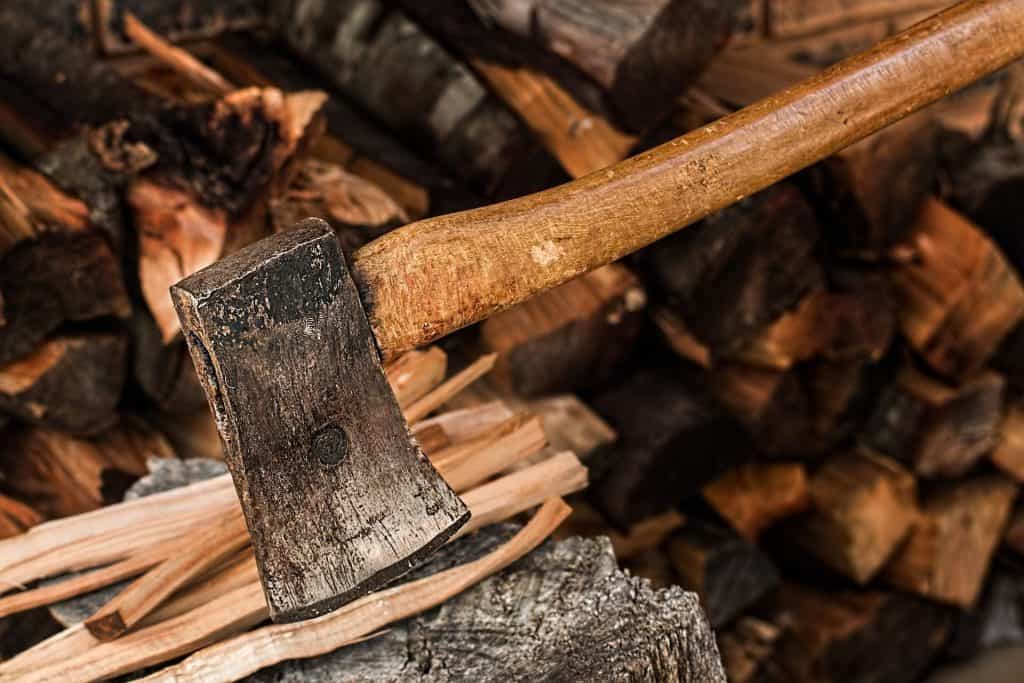 Felled or scavenged logs must be cut into crosswise sections called “rounds.” Split the rounds right away while they’re still wet. It’ll make it easier and give them more drying time.

To fit the average stove, each round should be around 16 inches in length. For logs of smaller diameters that are easily lifted, a sawbuck will make things easier. Larger logs should be bucked on the ground.

Cut most of the way through the log, then roll the log a half turn and make the final cut. Use a cant hook or peavey to roll the log. Be careful not to contact the ground with your chain. Nothing dulls a chain quite like dirt. If your chain becomes dull, you’ll either have to sharpen it or swap it out for a spare to finish cutting.

If you own a gas-powered splitter, you’ll have it easy. But for less than 10 cords, the best tool is an 8-pound splitting maul. You’ll also need a sturdy splitting block. A log of about 16 inches in diameter and about a foot in length will do nicely. Make sure it’s on level ground and sunk about 2 inches into the ground.

For logs less than 3 inches in diameter, don’t bother to split. If they’re between 3 and 6 inches, cut them in half. For logs up to a foot in diameter, cut into quarters. For any larger than that, cut three arcs off the log, so the center of the log forms a triangle. Then cut the triangle into pieces that will fit into your stove. 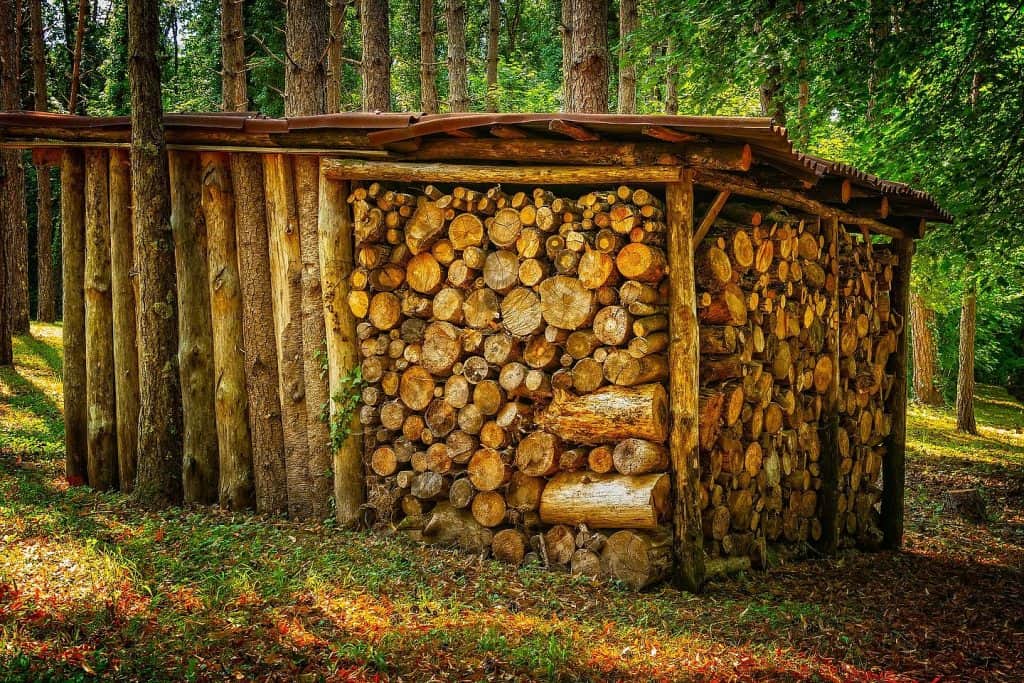 To that end, form must follow function, and the best form I have seen is the classic New England method.

First, separate the stack from the ground—at least 5 five inches will suffice. This prevents moisture from being sucked into the wood by capillary action, and it allows air to circulate into the stack.

As a foundation for your wood stack, the ubiquitous cargo pallet does the trick nicely. Simply visit any big-box store, and near the loading dock, there’s usually a pile of pallets available just for the asking.

Where you locate the pallets on your property will depend on several factors. They should be in an area that gets a fair amount of sunlight and isn’t completely sheltered from the wind. If you won’t be moving the wood inside or into a shelter adjacent to the house, put the pallets in a place that’s readily accessible throughout the winter.

The majority of people stack their firewood in parallel rows—and they’re doing it wrong. Parallel stacking impedes drying. The wood should be arranged in a cross pattern of courses on the pallet. As you build, each row of wood should be perpendicular to the one beneath.

The idea is to expose as much surface area as possible to sun and wind while still maintaining the stack’s structural integrity. This will assure maximum airflow throughout the stack, particularly for warm air to rise through the slats of the palettes up into the stack.

Once you’ve stacked your wood, cover it to keep the rain and snow off but leave the sides open to allow the wind and sun to do their jobs.

The drier, the better

Drying firewood is vital because up to 50 percent of wood is water. When you burn it, the water boiling off is wasted energy, reducing the efficiency of your burn by as much as 25 percent and producing excess smoke.

Ideally, your wood should be less than 20-percent water. A wood hydrometer will determine the water content of your firewood. It typically takes anywhere between six months to a year to get firewood to this level of dryness.

There are other advantages to dry wood. It ignites more readily, produces less smoke, is lighter to carry, and is far less likely to line your chimney with dangerous creosote. 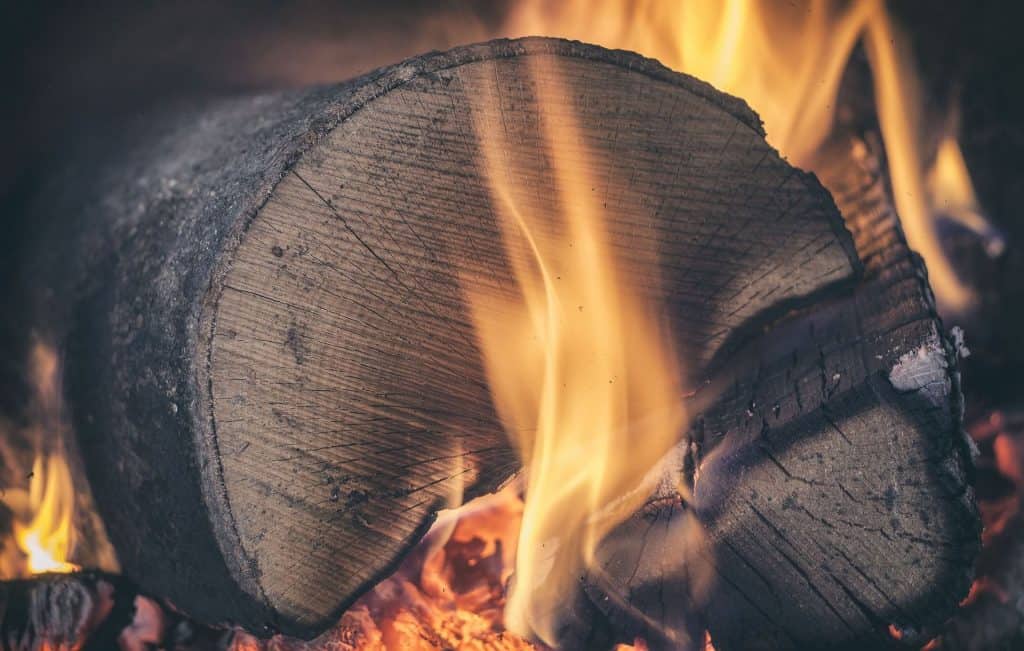 When you start a fire in a woodstove, you want it small and hot at first. A good indicator of its efficiency is to go outside and check your chimney. At first, you’ll see a fair amount of smoke emanating from it. But when the fire is sufficiently hot, you’ll see no smoke—just heat waves rippling over the top of the chimney.

Once the fire is burning well enough to close the stove door completely, it’s time to set the dampers for the long haul. Stove and furnace manufacturers’ manuals notwithstanding, proper draft adjustment is achieved only through trial and error. And every stove is different.

When the stove is lit, the drafts should be wide open, and the door should remain open about half an inch. Once the fire is hot enough that there’s no smoke emanating from the chimney, fill the stove box and shut the door, leaving the draft open for about another 15 minutes.

Then begin closing the draft gradually. I mean about an inch at a time if it’s a sliding draft and nearly the same for a turning draft control. Watch the fire. It should get lower, but never allow it to smolder. Before retiring, add two large logs and leave the draft open just enough to keep a low flame, but again, don’t allow it to smolder.

Your burn time will depend on several factors. Larger logs packed tightly will burn longer. Therefore, once moved close to the house, your wood stacks should be arranged according to log size. A good arrangement is to have one pile for smaller logs for starting the fire and another for a continuous burn.

Remember that the chimney will also be cold when lighting a stove or furnace on a cold morning. If it’s an external chimney, it’ll be even colder. Granted, there will be some residual heat from the night’s fire, so the earlier you light the new fire, the better.

If there hasn’t been a fire for a while, there will be a column of cold air in the chimney. Cold air is denser than warm air, so the warm air, which carries the smoke, will be blocked from rising. This is what causes back-puffing of smoke into the room.

Often, heating the air in the chimney can help. One method is to ball up some newspaper, impale it on the end of a long poker, light it and shove it up the flue.

Another cause of smoke in the house is most often associated with a stove or furnace in the basement. As heat is generated, it rises to the upper levels of the house, pulling air up out of the lower levels, starving the fire of oxygen, and causing it to produce more smoke.

Taking the path of less resistance, the basement smoke moves upward from floor to floor, basically turning your house into a huge chimney.

The best cure for this is to get what’s called “take-up air” into the basement, pronto. Open a window. If you have a windowless basement, cut a hole in the basement wall above ground level, run a PVC tube through it—about 5 inches should suffice—and cap the outside opening with some mesh to keep out furry visitors.

The art of banking

It’s important not to allow your fire to smolder overnight. There are two ways to avoid this.

You can put a couple of extra-large pieces of firewood in the stove and lower the damper to keep a small flame going. But it’s important not to close the damper too much, as this will cause the fire to go out and leave the logs smoldering all night, which will produce excessive creosote.

Another way to avoid smoldering is to “bank” the coals for the night. This keeps the stove warm until morning, allowing for an easier start with less smoke and preventing thicker creosote buildup in the chimney. Here’s how to do it.

When you’re about to retire for the night, let the logs in the stove burn down to coals. With the dampers wide open, rake the glowing coals into a pile. Put a few small pieces of wood on the pile and cover both the coals and wood with ash. Slide the dampers mostly closed, and you’re done.

In the morning, fully open the dampers and rake off the ash covering. Beneath it, there should be some glowing embers. Rake them forward and arrange several pieces of small wood around them. In moments, you’ll have a small fire going.

So why isn’t banking coals standard operating procedure for everyone?

Because banking provides considerably less heat overnight than a full burn. For very cold nights, it’s better to simply load up the stove with large logs and start a new fire in the morning.

Keeping the ash cleaned out on a regular basis will improve the draft, but it’s important to store the ash in a metal container with a lid. A good place to dump the can is over your garden. Ash contains calcium, which can help regulate soil pH, potassium, phosphorus, and other soil nutrients. 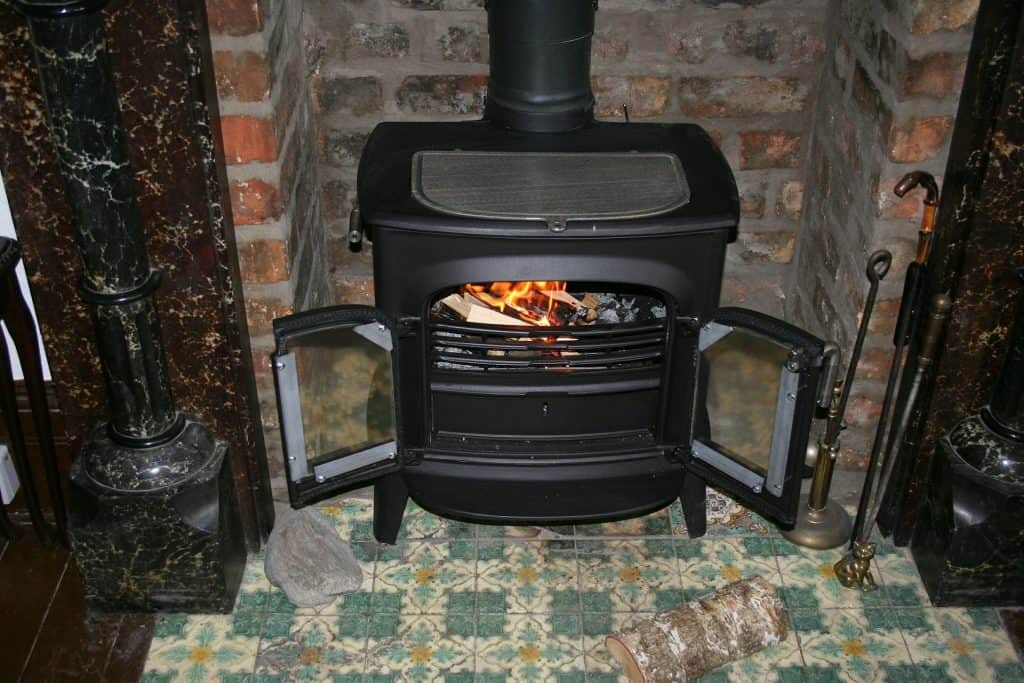 Despite marketing trends (and sales pitches) toward stoves of ever-increasing girth, bigger is not better when it comes to stoves. The fact is that a small stove is far more efficient than a large one, which may produce too much heat for a given area, inducing stove owners to burn their firewood at a smolder.

This wastes wood and causes dangerous creosote buildup. To match your stove to your house, here’s a good rule of thumb.

Wood burning is a cornerstone of preparedness and done right, it’s one of the more efficient ways to heat your home this winter. Of course, “done right” is the operative phrase. And it all starts with wood management.