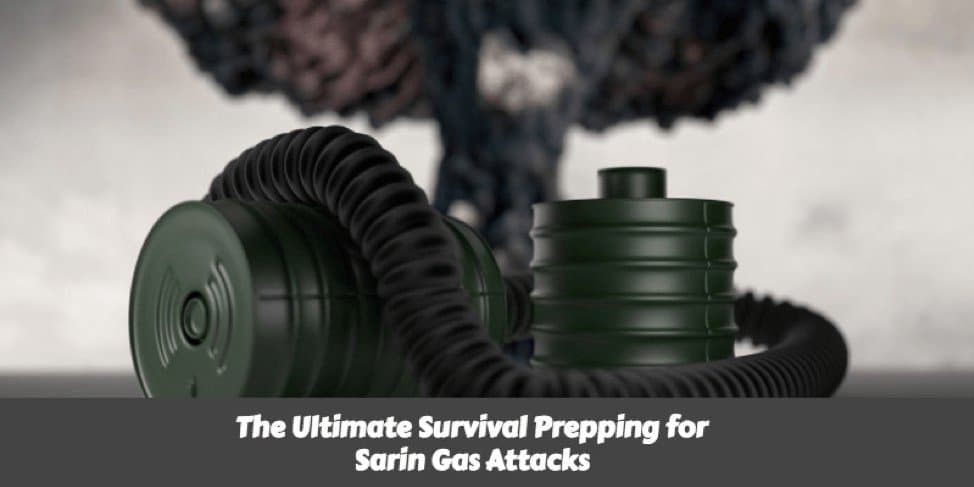 “Doomsday Preppers” have taken into careful consideration the different situations and scenarios in which survival prepping would be necessary, and one situation that may require attention is protection against sarin gas attacks or other chemical warfare releases in your environment.

Chemical warfare agents were heavily used as an attack weapon in warfare up until after World War I, and following the complete devastation of these weapons and chemicals on the population, they were shortly outlawed after this war. In 1925 the first international agreement called the 1925 Geneva Protocol banned the use of poisonous warfare agents such as sarin and mustard gas.

This agreement also halted the production, stockpiling and retention of such weapons and required the destruction of these items. And a reaffirmation of this prohibition was then implemented again in 1993 by the Chemical Weapons Convention (CWC) with a similar outline of the banning of these chemical warfare agents and the restriction of using these warfare agents in attacks in the future. This agreement, although in place, has recently been disregarded as the war in Syria has recently deployed warfare agents such as sarin gas in attacks in their country.

With recent events of chemical and gas attacks, protection from gas and chemical attacks have been on the forefront of preppers minds as they plan their survival prepping with the consideration of a potential gas attack during a “doomsday situation”. Becoming familiar with the dangers associated with gas and chemical attacks and stocking your prepper supplies with effective chemical protection gear can be a potential life safer in the event of a chemical/gas attack.

What is Chemical Warfare

Chemical warfare is the act of using toxic chemicals and gases in an attack on a population. Among the different types of Weapons of Mass Destruction (WMD), chemical warfare is one of the most brutal weapons created by mankind.

The birth of chemical warfare agents was originated in the German gas attacks in Ypres, Belgium back in 1915, where they deployed chlorine in the battlefield against their opponents and first saw the lethal and incapacitating effects this toxic agent had on humans. During this attack, the German military released 168 tons of chlorine gas, which killed an estimated 5000 allied troops.

Following this chemical warfare attack in Germany, chemical warfare agents were then heavily used throughout World War I with the use of agents such as phosgene, sulfur mustard, and lewisites which lead to the death of 100,000 people and over 1.2 million casualties in total during World War I.

With the dangers that are presented to human life with the release of these warfare agents, preppers have started to turn their attention to arming themselves with protective gear they can quickly use in the event of this type of chemical and gas release.

Effects of Nerve Gas on the Human Body

A type of chemical warfare agent that can be used in an attack is nerve gases which could significantly impact the human body and be hazardous to human health. Nerve gas effects on the human body can include constriction of the pupils, increased production of saliva, runny nose, increased sweating, urination, decreased heart rate and blood pressure, tremors, and possible convulsions.

The most critical effects are those that affect the respiratory system, as inhaling these nerve agents can be dangerous to your health. Sarin gas in particular, attacks the nervous system, which interferes with the central nervous system and muscle fibers.

Most nerve gases are hard to determine as the gases are usually colorless and odorless and can have almost immediate effects right on the onset of exposure. Once you are exposed to these chemical gases, you have nearly minutes to really properly arm yourself with protective gear to shield yourself from its effects.

Protecting your airways is critical when a chemical or gas attack occurs, so having a protective chemical and odor face mask is critical to your health. Having an air-purifying respirator that can protect against chemical warfare agents is essential to have in your prepper supplies.

The use of chemical weapons has grown way beyond the use of attack on the battlefield with the goal in recent years to use these weapons against the population as a way to cause mass destruction. The growing fear of terrorist groups deploying this type of attack has also become a cause for concern for many civilians as recent wars have used these forms of weapons on their enemy.

The risk of chemical warfare is real, and being prepared with the knowledge and protective equipment necessary is vital in ensuring your safety in the event of this “doomsday” situation. Below are tips to consider when you are faced with a sarin gas attack in your environment.

Did you know that chemical gas is usually heavier than air? Chemical gases weight means that the gas is more concentrated closer to the ground, which would indicate seeking higher ground is a must in limiting exposure to the released sarin gas.

If sarin gas is released in your building make your way up the stairs as high as you can get, either to the roof or the highest level you can get. If you cannot make your way out of your home, try your best to close windows and doors and sealing the doors and windows off with tape so that you are not allowing any gas to make its way into your environment.

Preparing with the necessary items when any type of “doomsday” situation occurs such as a sarin gas attack can be increasingly helpful when you are stuck in one area or when resources are limited following this type of an attack.

Usually, your bug out bag will contain all the necessary supplies you would need like water, food, weapons, protective gear such as a chemical decontamination kit, and other important supplies. Also, you may want to have in place a contingency plan that each member of your family knows in the event that you become separated from your loved ones. Chemical protection from warfare agents that are dispersed into the environment will be necessary in guarding against nerve agents like sarin gas that can be extremely hazardous to our health. The question then becomes, what is the best way to protect ourselves against chemical attacks, like sarin gas?

The biggest danger we face when chemicals are released into the environment is ingestion of these chemicals usually through breathing. When we breathe in chemical warfare agents, it can have lasting effects on overall health. And ensuring that you have a protective air-purifying respirator in your possession when a chemical attack occurs can be critical in helping guard against the ingestion of chemicals into your body. Survival prepping can be essential in guarding yourself and your family in the event of any “doomsday” situation. And when you are planning out your survival supplies, taking into consideration potential gas attacks can be important in ensuring you have the proper protection when and if this lethal event occurs.

1 thought on “The Ultimate Survival Prepping for Sarin Gas Attacks”