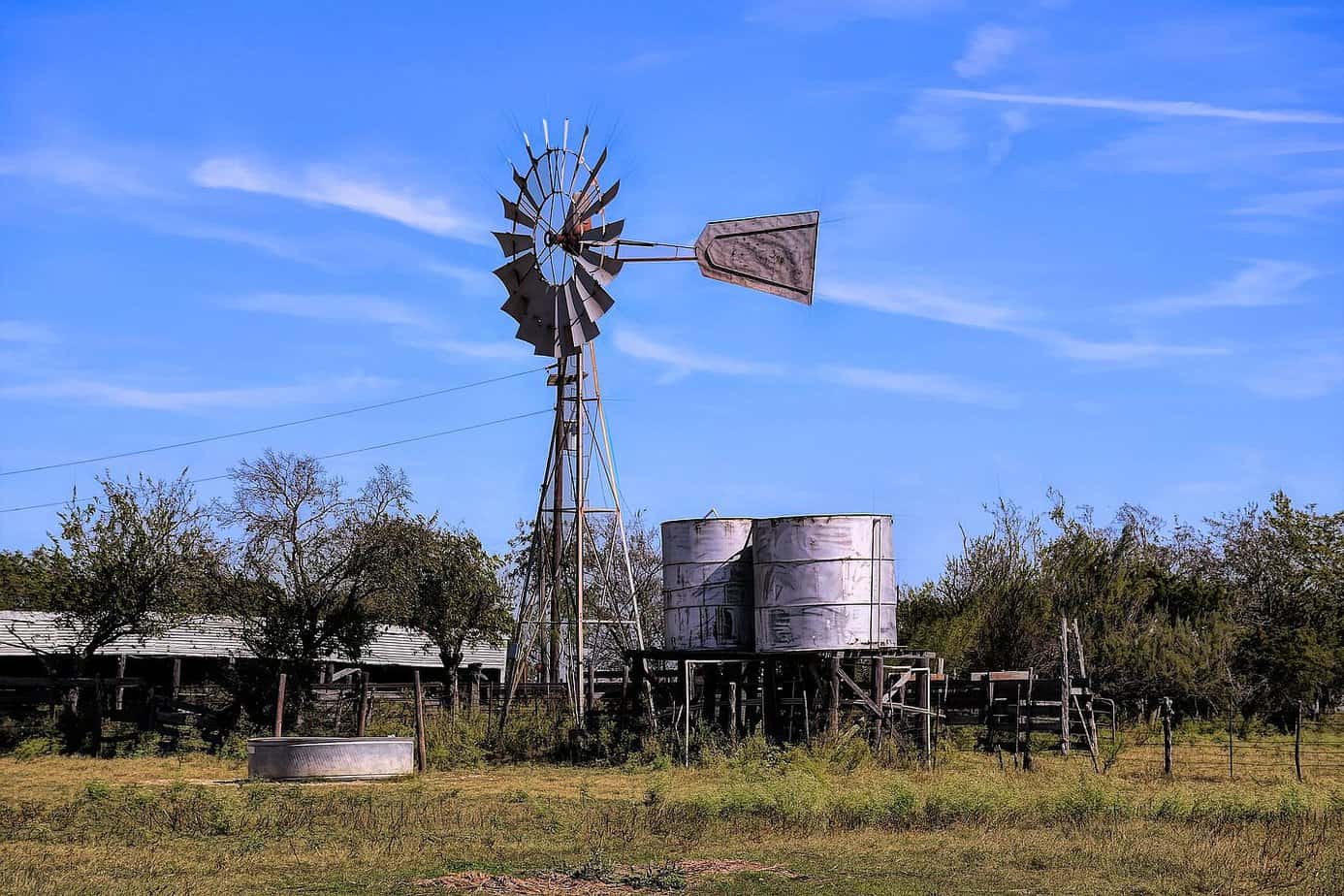 Water is your number one priority before and after the brown stuff hits the fan. In whatever situation you might find yourself, and even if you have access to a source of water, you will need to figure out how to store that water for the long term. Here’s why cisterns are the ideal solution to secure a large water supply.

What is a cistern?

Contents hide
1 What is a cistern?
2 How does a cistern work?
3 How to make your own
3.1 Picking the location and other recommendations
4 Using the water from your cistern
5 Concluding

Cisterns are not a new thing, and the technology used for building and using them is ancient. In fact, cisterns were used extensively by the Ancient Greeks and Romans. There are historical pieces of evidence proving the use of cisterns in many desert regions of the Middle East, and some of these cisterns are used even today.

Even in rural North America, cisterns were quite popular before the invention of the public water system. In the 1940s, cisterns were a common feature in households all across the United States.

How does a cistern work? 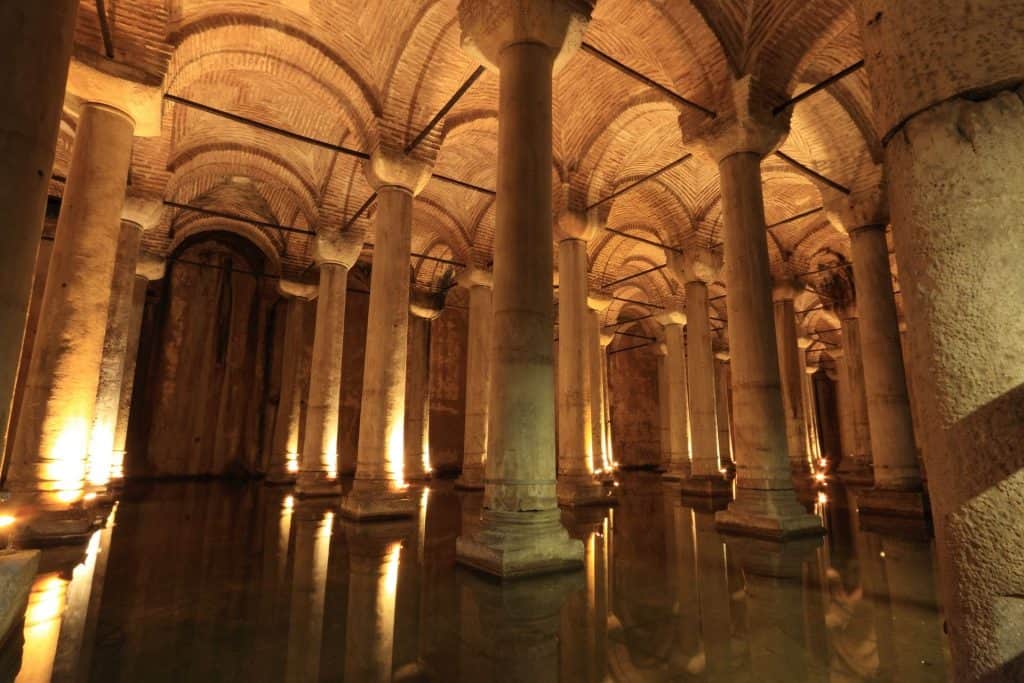 Simply put, cisterns are designed to store a large supply of water for later use. You would fill a cistern with water when this precious resource is plentiful, and you will draw water from it when water becomes scarce.

Filling the cistern with water can be a simple job or a complex one. The water source could come from the rain runoff from your home or other building, or you could improvise a feeding system from nearby mountain steams or water holes.

The method most people will choose to feed their cisterns is by collecting the rain runoff from their buildings since most constructions have roofs with large surfaces which can collect large quantities of water very quickly. The water will run down the roof, and it will be funneled into the cistern(s) using the gutters and downspouts.

Cisterns are located inside or outside the home, depending on the needs of the owner and the environment where they live. For example, placing a cistern outside in areas where it’s exposed to below-freezing temperatures is not recommended unless you find a way to properly insulate the cistern. If you live in such areas, it would be better to build or place the cistern under your house.

Once the cistern is filled with water, there are a few ways you can draw water from it. The most common method to access the water is by installing a spigot to the lowest point of the cistern and allowing gravity to do all the work. However, once the water level in the cistern drops, so will the pressure, and you will have a slower flow.

Other methods used to draw the water employ the use of an electric or manual pump. In sunny/arid areas, cisterns are buried in the ground, and people use a solar-powered pump to have a continuous flow.

If there’s no electricity or if you can’t use a solar panel for some reason, you could install a manual pump. In fact, it’s recommended to have a manual pump installed into your cistern, even if you’re using an electrical one. It’s a great backup measure, and it will enable you to draw water from your cistern regardless of what happens.

How to make your own

Back in the day, cisterns were nothing more than large holes in the ground lined with rocks. The tight-fitting rocks were lined with lime-based plaster to make them waterproof and to prevent the water from flowing into the ground.

As the world changed and various conditions and materials became available, so did the cisterns evolve, and people began to use different construction methods. For example, the technology used for making barrels for storing wine and bourbon was used as well for the construction of water cisterns. After wood, iron, and steel were used for the same purpose, although such materials can often put impurities into the water.

Nowadays, most water cisterns are made from hard plastics since this is the cheapest and most common alternative for people all around the world. Hard plastic can withstand the environment and physical abuse and provides lower costs compared to the other materials.

However, if you decide to go with a plastic cistern, make sure the plastic used for manufacturing it is food-grade or designed to hold water for human consumption. Some plastics will often leach chemicals into the water, and these are a health hazard for you and yours.

On the market, there are all sorts of cisterns available or containers that can be used to make your own cistern. All parts are readily available, and it depends on your skills and budget if you buy a pre-made cistern or build your own.

Most preppers I know bought a food-grade container and scavenged some plumbing parts to make their own cisterns for cheap. The rule is simple; the more complex your cistern is, the more time and money you will put into it.

Below you can find a simple design that pretty much anyone could build. 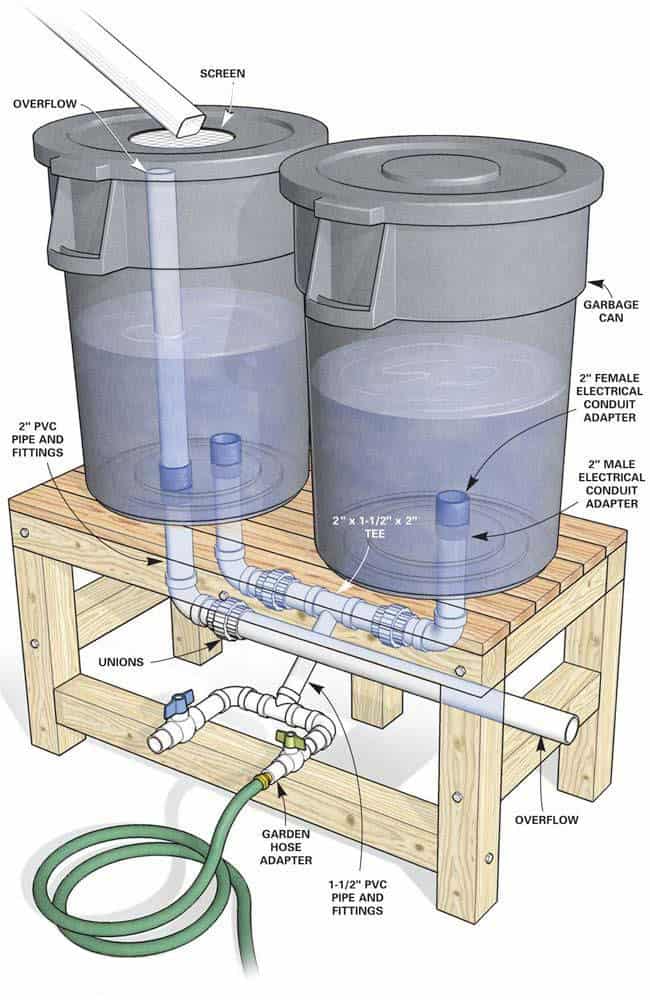 Picking the location and other recommendations

As said previously, where you choose to place your cistern will greatly influence its convenience and performance. Ideally, it should be located as close as possible to where the water is needed and used. The farther away you place it, the more effort will be needed to get the water where you need it.

For example, if your water source used for filling the cistern is not located nearby, you will need to use more pipes to feed the cistern, but even so, it’s much better to place the cistern near where it’s needed than close to the water source.

The majority of the pipe will be used from the source to the cistern than the other way around. In case your pipe system is damaged, you will still have water feeding your home until you manage to fix the problems and re-connect the cistern to the water source.

Once you figure out which is the best location for your cistern, it’s time to decide if you want to place it above or belowground. Both placements have some pros and cons.

If you live in an area where you get freezing temperatures for long periods of time during the year, you should go with an underground cistern. The same goes if you get heavy snow cover, and you should stick to the underground one since it’s more resistant to freezing. Ideally, you should locate it in the basement.

If you want to build a cistern and use it for watering your garden, you can stick with an aboveground one. People using water cisterns for irrigation during dry times will drain the cisterns prior to the yearly freeze. They do so to prevent the containers from being damaged by the water freezing inside. 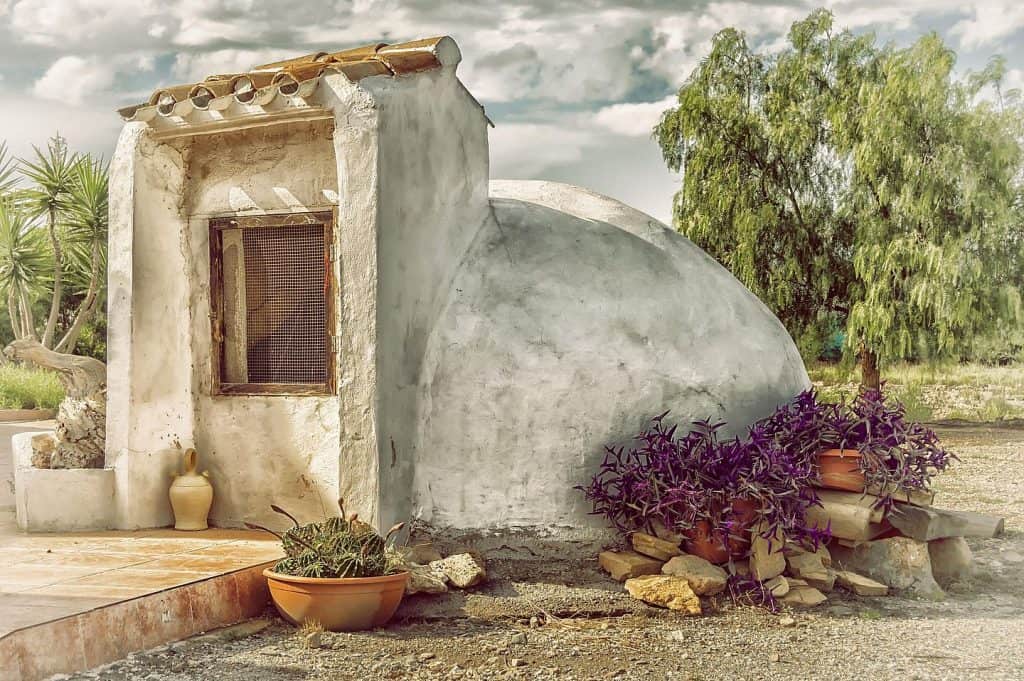 Regardless of what type of cistern you build, one major aspect of dealing with it will be to keep impurities out of your cistern. If you obtain water from your roof during rainy days, you will need to install a screen over your gutters and check it periodically to keep it free of debris.

Also, the roof of your home it’s a key element to be considered since there are certain types of roofs that work better for collecting water. For example, roofs built from natural materials will leech resins and tannin into the water, and these can be poisonous if ingested.

In general, natural slate roofing is considered the best for gathering water since the tiles will stop most of the debris from running into the cistern, and there’s also little chance of contaminants compared to other types of roofing.

Metal roofing from tin and aluminum also works well, but the painted surfaces can contaminate the water over time. Asphalt roofing should be avoided because It’s made from petroleum products, and these are a great health hazard.

Using the water from your cistern 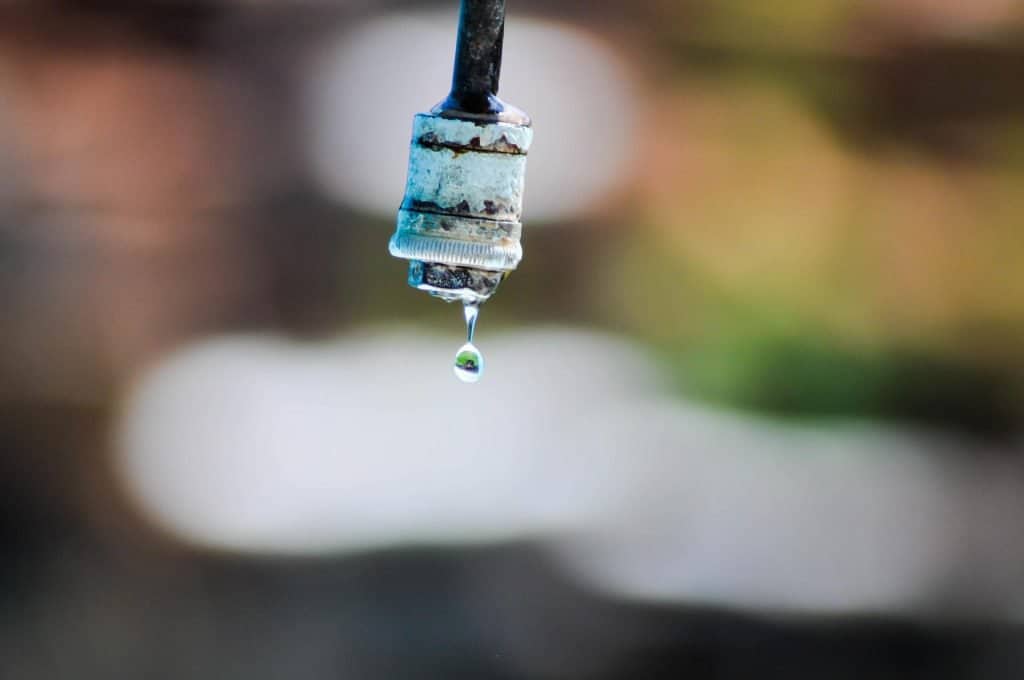 Most folks will not drink water from their cistern without a proper water processing system, and that’s the right thing to do. Regardless of how you feed the cistern, do not drink the water until after it has been processed. You have no way of knowing what’s in the water, and it’s not safe to drink unless you make it potable.

For example, rainwater contains all sorts of atmospheric contaminants, from dust to chemical particles that are harmful if ingested. Even if your water sits in your cistern for a long time, that doesn’t mean it’s clean, and lead and other impurities will settle on the bottom. 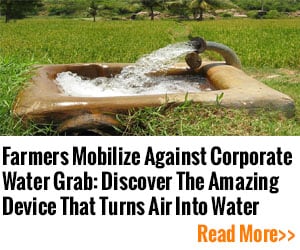 If you don’t treat the water, use it just for general cleaning, handwashing, toilets, and watering your plants. If you want to use the water for drinking and cooking, you need to make it safe to drink.

Boiling the water, in general, works great for small quantities, and it’s worth the effort when drinking water is in short supply. Just like in a survival situation, spending time and effort boiling the water will ensure your survival.

You can also treat the water with chlorine to disinfect it, but you need to remember that chlorine doesn’t remove impurities. You can use unscented and uncolored bleach if you have it available.

Even so, the best method for making the water potable remains filtration. Some folks use various pool filters for their cisterns, while others use a layer of specifically designed filters to convert rainwater, stream, and lake water into potable water. You can make your own filtration system or buy a large reverse-osmosis aquarium filter.

Alternatively, you can buy a commercial filter designed specifically to make any kind of water potable. One such example would be the Berkey Gravity-Fed Water Filter, and for me, this was one of the best investments I have ever made. Your choice of getting a water filtration system depends on your needs and budget, so make sure you do your homework to make sure you’ve made the right choice.

In this age of modern conveniences, when everything is being handed to us, and clean water is available with a turn of the tap, it seems that cisterns don’t fit the narrative. However, we often forget the survival lessons of our ancestors, and we overlook the lessons learned by past generations. Revisiting the past will provide survival lessons and methods to survive the future.

Clean water becomes a must during a survival or emergency scenario, and we have to acknowledge that it is not available everywhere at all times. If you have a water source available, independent from the public utilities, you must store and conserve it. A good cistern will help you survive when the water tap runs dry.

Recommended for survivalists and preppers:

How to extract moisture for air to make a water supply

The only wild medicinal plants you need to use WSHTF

More than 100 Survival Food recipes you should try