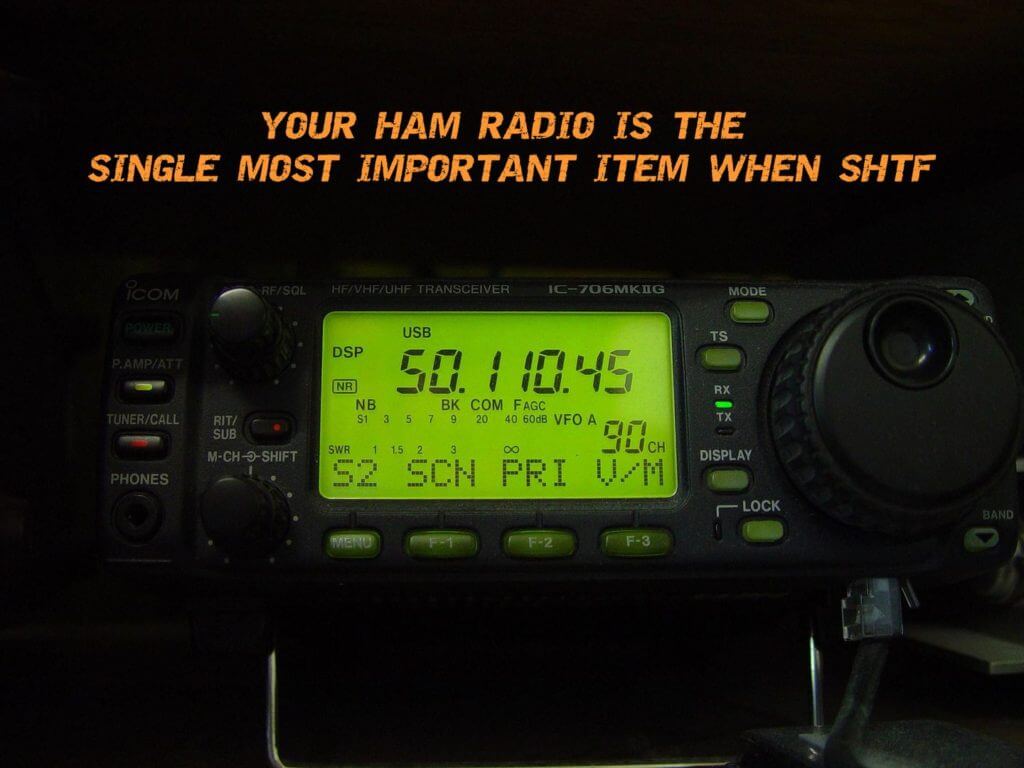 Anyone who has been cut off from news of the outside world will tell you the importance of ensuring your communications link. Sitting in a tornado shelter or a bunker, your need for the latest news is compounded. Try to imagine several hours or days without information on what is going on outside. Having A HAM radio will become your only option to connect with the outside world.

Doomsday preppers are hotting up the retail spaces as survival gear goes up a notch. According to research, more than 160 million Americans are purchasing survivalist gear, and of this group, 36.35% spent more than $400 on survival kits in the last year. For survivalists, there are a few key items that need to appear on every list, and if a HAM radio doesn’t feature on it, it’s time to get a new list.

Contents hide
1 Disaster warnings
2 HAM radio and training
2.1 Related article: Crisis Communication Advice – Ditch the cell phone (or not?)
3 Putting yourself out there
4 Anyone Can Repair A HAM Radio
5 Far From Obsolete
6 An Integral Part Of Building Community
7 Conclusion
8 Useful resources to check out:

In every area of the U.S., the government has designated an emergency radio station. This station has been fitted out with emergency power and special protection from disaster. These emergency broadcast stations are monitored by all the other radio and TV stations for emergency traffic. If an emergency exists, they broadcast the familiar tone alert. It is usually heard as a test of the Emergency Broadcast System. This test is performed once each month. Special receivers, equipped with tone decoders, turn on when this signal is transmitted.

If it is not a test, you will be told which stations to tune to. The second method the government will use to advise you of emergencies is the NOAA (National Oceanic and Atmospheric Administration) weather service stations. They, also, have a tone alert to turn on special receivers when an emergency exists.

No matter what type of HAM radio you obtain, you must learn to use it NOW. First, make sure you understand the controls and operation of the radio in your home, then try it out in your shelter. The difference in antenna types, location, and the time of day can all make a difference.

Once you are familiar with the operation of the radio and what you can expect to hear, make an operator’s manual with that information in it so someone unfamiliar with the radio can use it. You should also teach several members of your group how to use the equipment and what to expect to hear at what time. Free information and operating instructions on Ham equipment and antennas is available online. The only requirements they have is for you to be interested in training for an Amateur Radio license. Some clubs even have free formal classes in radio theory and Morse code.

Clubs can be easily located doing a Google search for your area. These clubs are, also, a good source of used equipment at a reasonable cost.

Putting yourself out there

Remember, transmitting will enable you to be heard, but also to be tracked down. There is no perfect protection from radio direction finding. The fact that you put a signal on the air will tell someone you are there even if your transmission is so short they do not have time to track you down. “They” may only be the local sheriff who wants to distribute your stored foods to the “needy” who did not plan ahead.

Think who may be listening before you transmit. Depending on the type of disaster you are preparing for, you might want to listen first, before letting people know you are hiding somewhere safe with all the resources you need to survive long-term.

Anyone Can Repair A HAM Radio

The Dummies range of books offers Doomsday preppers the opportunity to take their communication skills to the next level. Their issues dedicated to the HAM radio are worth the addition to that survival checklist, as these will come in pretty handy should your most important form of communication conk out.

With this range of books in the local survivalist library, anyone in the team can be a communications specialist, as the most common issues users have with these radios is adjusting the antennae and wiring correctly. These books are also quite handy for those who require access to diagrams and charts for further reference.

Those who are willing to learn the ins and outs of HAM radios will find a host of tutorials online. These take you through the various steps to repair things on the mechanical side, or to merely adjust certain things from an operational perspective.

It might seem like the digital age has made the need for the HAM radio obsolete, but more and more enthusiasts are signing up for licensing than ever before. Currently, there are over 700,000 HAM operators, or hams, in the United States. In order to use a HAM radio, hams are required to go for training that will take them through the rules and regulations as well as radio etiquette.

This is not only a requirement by U.S. federal law but in other countries too. The HAM radio has the edge over cellphones, as it has the ability to broadcast to a vast number of people at the same time. There are also ways to get away with makeshift antennae and power sources, where cellphones are quite limited. HAM radios are also quite hardy, which means they can survive in some of the toughest conditions on Earth, whereas cellphones are a little more temperamental.

HAM radios have been around for more than a century, and some of the more recent models feature a whole list of advancements such as digital displays and slots that can accommodate Micro SD cards. HAM radios can be used by professionals and amateurs alike.

An Integral Part Of Building Community

One of the most important things to do after an apocalyptic event or disaster is trying to rebuild the community. This is because colonies of fewer than ten people are less likely to survive, according to archaeologist and dean of the University of Arizona Honors College, Terry Hunt. One of the fastest ways to connect with others is through radio. Setting up channels and knowing which channels nearby establishments are using will make a remarkable impact on the speed of getting communities together.

Radios are an integral part of establishing trade routes, setting up security, and creating early warning systems for natural events. Radios are also valued, as their reach is far, and setting up specific broadcast times will allow communities to keep each other updated with the latest developments, and hopefully attract new community members.

HAM radios shorten the distance between communities after an apocalyptic event and tend to be a reliable way to communicate, and she be incorporated into any prepper’s toolkit.

Having a HAM radio will keep you connected to the world when SHTF. It may be your only way of figuring out what’s happening out there and where you are heading. You will be able to obtain precious information and you will act on it accordingly. Survival is not possible without staying informed and you need to be able to use a HAM radio if you want to make it.