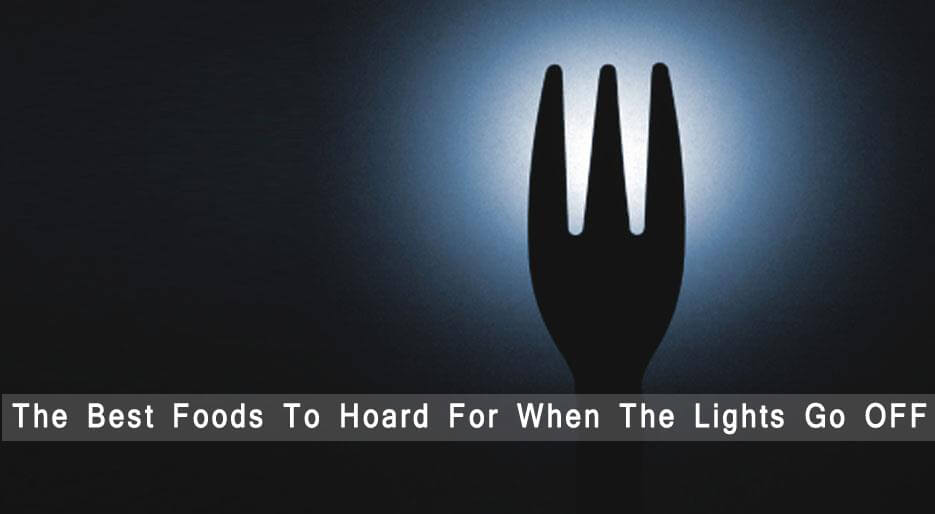 If you live off-the-grid, the loss of power might not seem catastrophic to you. However, for the rest of the people out there, having no electricity will drastically lower their life’s quality or even worse. Regardless of one’s condition, the following are the foods to hoard.

We have to consider that the majority of our needs require power and we are lost without it. You should at least be able to hoard the right foods to increase your chances of survival when the world plunges into darkness.

And if you know a thing or two about preparedness and about the dangers we face today, you should acknowledge the fact that a power grid failure is the most realistic threat that we could ever meet.

The fact that a power grid is due to happen is not the scariest thing. What worries me the most is the fact that many people are laughing at the thought of power grid failure. They prefer to keep living in their soap bubble, in denial. When the bubble bursts people will get desperate, and the rush for hoarding supplies will begin.

Events that can cause a power grid failure:

Contents hide
1 Events that can cause a power grid failure:
1.1 What will happen when the grid goes down?
1.1.1 The first wave
1.1.2 The second wave
1.1.3 The third wave
1.1.4 The final wave.
2 Here are the best foods to hoard:
2.1 Distilled and sparkling water
2.1.1 Related reading: Harvesting rainwater
2.2 Tea, Coffee, and Bouillon
2.3 Canned and dehydrated meats
2.3.1 Recommended reading: How to make Pemmican and How to make Jerky.
2.4 Oils
2.5 Whole wheat flour and other food items
2.5.1 Related reading: Honey a perfect survival food and much more
2.5.2 Foods for the little ones
2.5.3 Preparedness and survival resources:

What will happen when the grid goes down?

People will start with foods to hoard and medication a day or two after the outage. Other unaffected locations may try to assist the people affected by the power outage. However, there may not be enough to go around.

These will be in denial, the ones that think they can ride it off with what they got and with what the government will provide. They will be the first wave of casualties and this because, by the time they wake up and realize what is happening, all the supplies will be gone. For them, it will be too late to grab something. In the last minute of desperation, they will turn to loot and violence to survive.

This wave gathers last minute hoarders. These are the people that are smarter than the first ones, they have increased chances of survival.

However, without additional supplies and knowledge, it’s just a matter of time until their luck runs out. You’ve probably seen this type of people every time a local disaster or any other event was happening in your area. They are the late “shoppers” buying everything they can.

Even during the last minutes, they will stockpile on everything they can get their hands on. I know that it’s improper calling them shoppers because nothing will work without power and they won’t be able to buy supplies. However, it wouldn’t be fair calling all of them “looters.”

By this point, most emergency services, medical facilities, and government agencies will feel unable to cope up with the demand for food, shelter, medicine, and other basic needs.

These are the preppers. Based on their knowledge and supplies they have the best chance to outlast a power grid failure. It won’t be easy for them either because, without a proper method of self-sustainability, they will turn on each other. Supplies will run out eventually, and most of the preppers will turn to scavenge and other last resort options.

Guns and ammo are common topics for most survivalists. Many of them are hoarding ammo like there’s no tomorrow, hoping to use it for protection or other business. They should concentrate on foods to hoard because they can’t eat bullets.

The elite, all-powerful people that think money will save them. These are the ones that have their personal bunker, a 2-3 year food supply and everything that you might think of. The problem with these so-called preppers is that most of them don’t even know how to make the best use of their supplies.

They don’t even understand what a life of restrictions is and they already think they got it all figured out. They are the most significant threat to themselves, and they don’t need exterior factors to decrease their chances of survival.

When selecting foods to hoard for a power grid failure keep in mind the following:

Here are the best foods to hoard:

Yes, water is not food, but it’s an important item that should be on top of your list. You should consider storing club soda in your pantry because it lasts for an indefinite period. It helps to relieve constipation, and it will make the kids happy. You can add various ingredients to it and give it a sweet flavor. It will successfully replace the soda that kids like.

How much water you should stockpile is up to you and depends on the storage space you have. You should have at least enough water to last you and your family for not less than three days. If your household has four people, you should have 20 gallons of water (4X5) for a day and 60 gallons for three days.

Besides stockpiling water, preppers should have an excellent plan to get more, either by filtering the water they can scavenge/gather or by producing water on their own.

Drinking tea is a healthy habit that has been around for more than 6,000 years and for a good reason. Besides having to boil water to make it, hence getting rid of bacteria, tea is also one of the quickest ways to help one dehydrate in an emergency situation. Coffee and caffeinated tea provide an additional boost of energy and it helps to keep you alert.

Other types of tea have a calming and soothing effect. Not to mention that many other teas have healing effects and their proprieties will prove useful during a time of need. Bouillon cubes are also a good choice because they are made up of compressed stock. Combined with hardtack, it can become a suitable meal replacement when nothing else is available. Don’t forget about these foods to hoard for harsh times.

The best and tastiest source of protein for a prepper is meat. Most of us can’t even go a day without having a nice portion of it. Meat can provide up to 90% of the sustenance needed to survive, and this makes it a perfect food to be stockpiled. While some prefer canned meat, some preppers are making their own jerky or pemmican for a long time survival.

Maybe you too should learn how to make it. When it comes to canned meats, tuna, salmon, and mackerel should be on your list because they are rich in omega 3 oils. When it comes to foods to hoard, meat is a must have in your pantry.

You should make sure you have enough of it. However, if you are vegetarian, you can stockpile on canned or dehydrated mushrooms, as they are also an essential source of protein.

When making the lists of foods to hoard when the power is out, you shouldn’t forget about oils. Oil can be used for cooking, but it also has many other uses during an emergency.

Olive oil is an excellent choice because it doesn’t have the chemicals resulted from processing, like other oils. If olive oil is too expensive for you, canola and coconut oil are a great replacement. They are heat stable and won’t go rancid as fast as other oils.

Wheat is a good item for your pantry because it’s rich in vitamins, fiber, protein, and minerals. You should consider storing wheat flour due to its nutritional value and general usage. Cornmeal flour and potato flour are also an excellent addition to the prepper’s pantry. Also, one should stockpile cereals such as rice, corn, and oats.

Other foods to hoard:

Related reading: Honey a perfect survival food and much more

Foods for the little ones

If you have kids, you should know how hard it is to please them and what picky eaters they can be. The last thing you want to deal with it during an emergency is a cranky kid. This is why it’s better to be prepared and have in your pantry something that will keep them happy.

Of course, that if you have a baby, you shouldn’t forget about baby formula and ready to eat baby foods. However, you should also consider these foods for the bigger kids: chocolate, cereals, hard candy, tang, canned fruits, jellies, and jams. A parent knows that a happy kid equals a happy life.

Having foods in your pantry that can “spoil” them will be a good thing during a disaster.