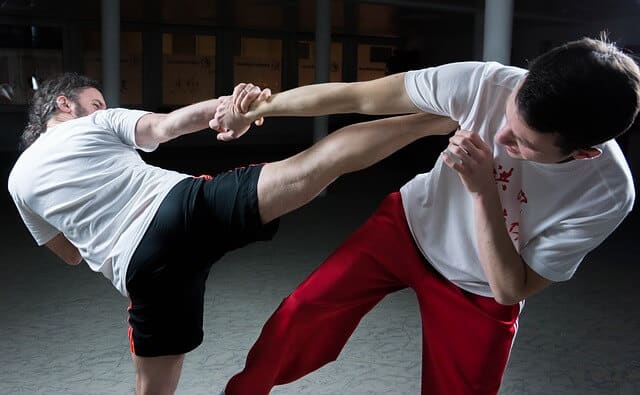 This theoretical article will explore the different elements of hand to hand combat, also introducing several practical tactics that can aid in a valid conclusion to a fight. Although we discuss supplementary weapons, the term “hand to hand” as applicable here relates to conflicts where the only defense is the hand.

One of the best ways to prepare yourself for any fight is to take up martial arts training. There are many types of martial arts that you can take up, and it all depends on what your goal is and how long you have to train for them. The earlier you start, the more prepared you are going to be if you need to use it. We have recently published an article about Asian Martial Arts, and we highly recommend you read that before you decide which you take up.

Of course, before there is any attempt at a fight, you need to decide if it is necessary or not. That thought can not and must not last long. A half-second decision is more than enough to make your choice. If you can run better than you can fight, do it. However, when all else fails, continue to read the rest of the article.

Before any hand to hand combat fight begins, a correct line of thought must be assumed. Street fighting is very different from the clashes seen in movies or a ring. It is imperative to understand that in such a fight, a person can sustain serious, if not life-threatening, injuries. That is especially true when the use of supplementary weapons such as broken bottles, knives, and clubs get introduced. 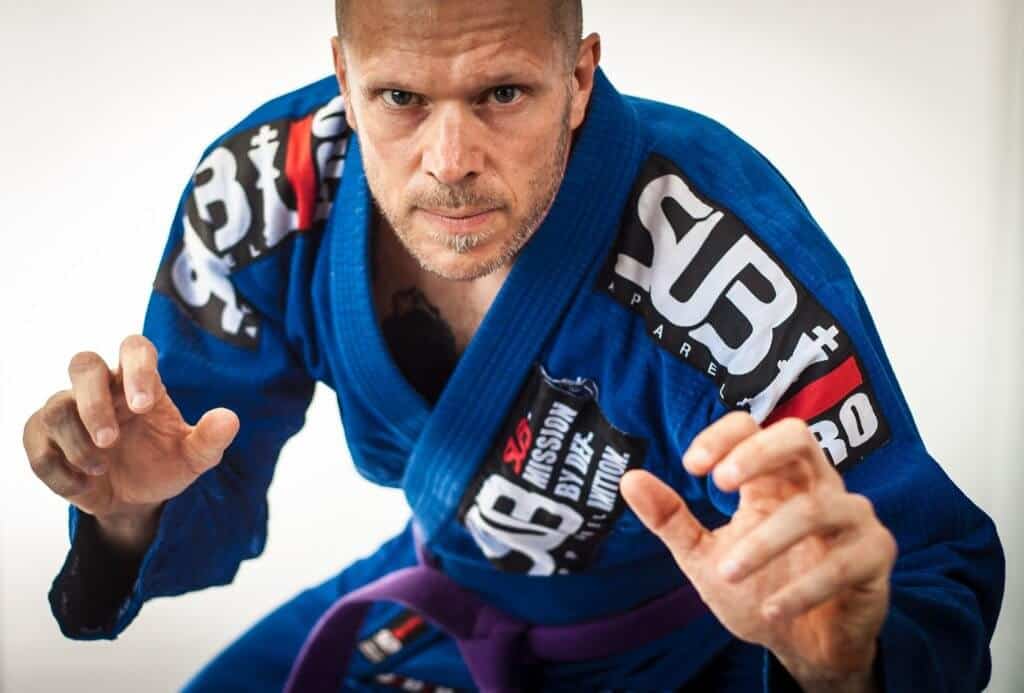 To avoid self-injury, you should never underestimate the opponent’s ability to cause harm. It does not matter what they look like, if they seem scared, or if they look unfit. An easy way to explain this is to say that if you consider fair play necessary in a fight, your enemy will take advantage of that and cause you a lot of harm. Civilized conceptions have no place in a battle except perhaps in the movies. Take any chance you get to destroy your opponent because if you do not, he will. This mentality of the urgency of self-survival is the first step to winning a fight.

The Objective of a Fight

What are the goals in hand to hand combat? These can vary between incapacitating your enemy to staying alive. Recognize your objective and the severity of the fight you are involved in quickly. That is easy to do most of the time. You can categorize most of the conflicts that anyone finds themselves in into a few different reasons:

Simply said, if you are lucky enough to be involved in a clean fight where only fists are concerned, you would have to disable your opponent to win.

One thing to think about, though, is that you need to make sure there is no other way to avoid the fight. In the eyes of the law, there is a fragile line between defense and attack, especially as you need to be the first to throw a punch if you are going to win.

Make sure that someone else will be able to back you up in your theory that there was no other way to avoid it, and that you were fighting to save your own life.

The Element of Surprise

The majority of people who win fights are the person who throws the first punch. Taking your opponent by surprise and striking at his weak zones (discussed later) would give you a better chance of emerging as the victor. If you are in a situation that has deteriorated to the point that demands action, do not wait for your opponent to strike, this will put you in a very vulnerable position and will very probably result in defeat.

But, like I said in the last section, make sure that you will be able to prove that there was no other way to avoid it. The loser of a fight will always try to say that the victor started it. That makes the element of surprise in hand to hand combat very tricky to get right.

Did you know: 5 Unusual Self-defense Methods for Survival Situations

Although dishonorable in context, it is always essential to gather a group to support you during hand to hand combat. That is especially true when you are to confront your opponent, and he knows that and collects all of his supporters to do battle. If groups are to be involved, the person with the larger group will always win. If you do not have the resources to gather a group, an alternative is perhaps to pay to acquire a group of bodyguards through the local private investigation or security services.

Such services are usually set up by ex-military individuals who have a lot of practical combat experience and training. If challenged to a fight, you should fully expect your enemy to gather a group of supporters to aid in his battle.

The use of these services are often premeditative and requires thinking about before the need arises. If you feel like you need to go into a situation that may require assistance, then you need to think about hiring people. However, in a typical bar fight, you may have to call on your friends to assist you.

On the same topic: Surviving And Dealing With Gang Attacks

On to the practical side of hand to hand combat. The first element is the ability to use your footwork for evasion and attack. If you stand in one place during a fight, you will be an easy target. By being fast and mobile, you increase the confusion in your foe and give yourself more vantage points from which you can strike or defend.

You should use your footwork in combination with evasions and attacks. The most straightforward stance involves you standing with the opponent facing your side, your left foot behind you poised with your arms in fighting position. With this stance, you would be able to move in eight directions as quickly as possible.

Practice your footwork regularly, and try to stay fit so that it is more comfortable. But remember never to underestimate the speed and agility of your opponent, until you see it. I have seen some of the biggest people you could imagine with a fantastic amount of dexterity.

During hand to hand combat, defend an opponent’s punches by striking out at his incoming blows, thus meeting them halfway and voiding their threat. With training, this is not so difficult to do as it appears. By observing your opponent, you can foretell his actions. Punches usually start with movement in the shoulders, and that is a good telltale of imminent danger. Similarly, you can defend against his kicks by raising your knee to meet the incoming strikes, avoid strikes to your knees as they are a weak point. 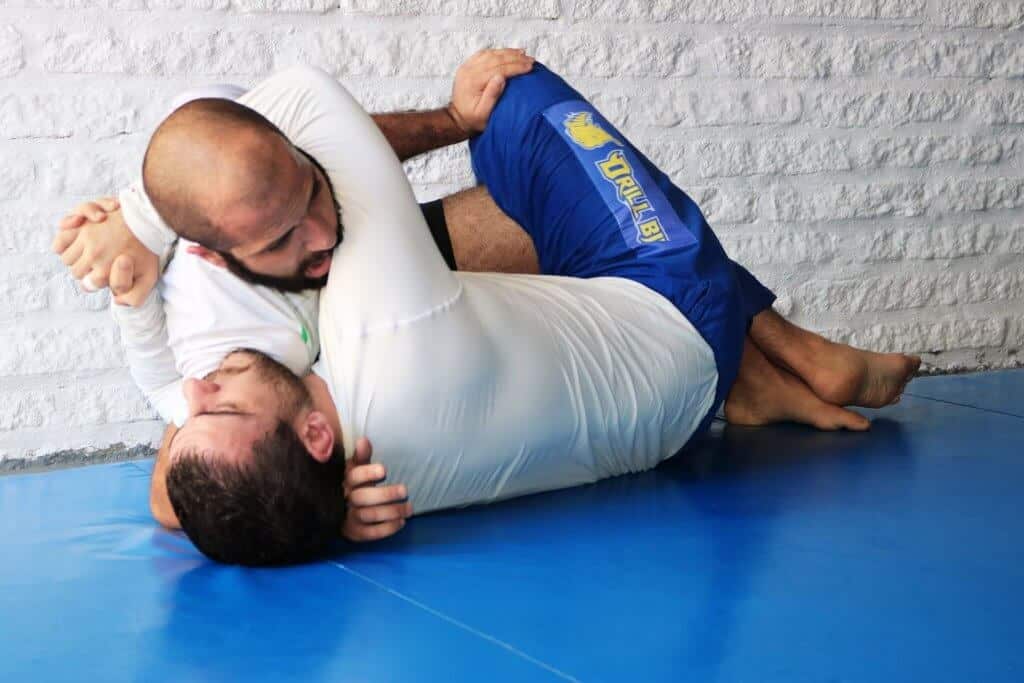 Kicks can be a little more challenging to foresee in hand to hand combat, though. That is because the start of a kick is in the hips. Do not overthink where you are looking to preempt the strikes, though, as you may be looking for a kick that never comes. While you are looking down at the hips, there is a great advantage for the opponent to get a good face strike in.

When striking at an enemy in hand to hand combat, identify his weak zones, which will give you effective strike results. Starting at the top: one soft zone is his eyes, a jab to the eyes would leave him temporarily blinded and unable to fight. Similarly used as the well known OSS move in close-quarter combat where an open hand covers his face with the fingers in the eye sockets. For more vital head points to exploit in hand to hand combat, make sure you check out this article.

A square punch or elbow to the nose results in temporary disability. That is because there is a large concentration of nerves in that area. And finally for the upper region is the throat which a strike can disable breathing.

Below that are the rib cages, an upward side thrust to the ribs results in breathing disability. Below that the crotch where there is a high concentration of nerves, a swift kick there is better than a knee jab — finally, a commonly overlooked weak zone, the knees. The best way to approach this target is to move swiftly towards them and hit diagonally downwards with the foot on the front or side of the knee. Using that tactic will probably bring the foe to the ground.

A combination of hits to more than one of these weak zones can cripple the enemy and destroy his ability to fight.

The introduction of a weapon in hand to hand fight changes the scenario dramatically. A sharp tool such as a broken bottle or a knife can cause life-threatening damage. For that reason, it is essential to disable the opponent before he procures such a weapon. Emphasized in the mentality section discussed earlier, you should have no second thoughts about delivering a crippling blow to your foe.

That is because such a lousy judgment could result in him desperately acquiring a dangerous tool to aid in his victory. There is no easy way to defend against a knife attack or any dangerous weapon without using your own knife or club type tool in self-defense. If such a weapon is not available, the best alternative is to escape the scene unharmed, to live to fight another day.

No one wants to get involved in a hand to hand combat fight, but if you do feel like it is inevitable, make sure you are ready. Get far away from a battle if you can help it. That way you  As I said at the beginning of the article, mindset, not their ability wins the majority of conflicts. However, skill and midset are often connected.

Once you figure out that you have the ability t defend yourself well enough to take down an opponent, you will feel a lot more comfortable doing it again should you ever need to.