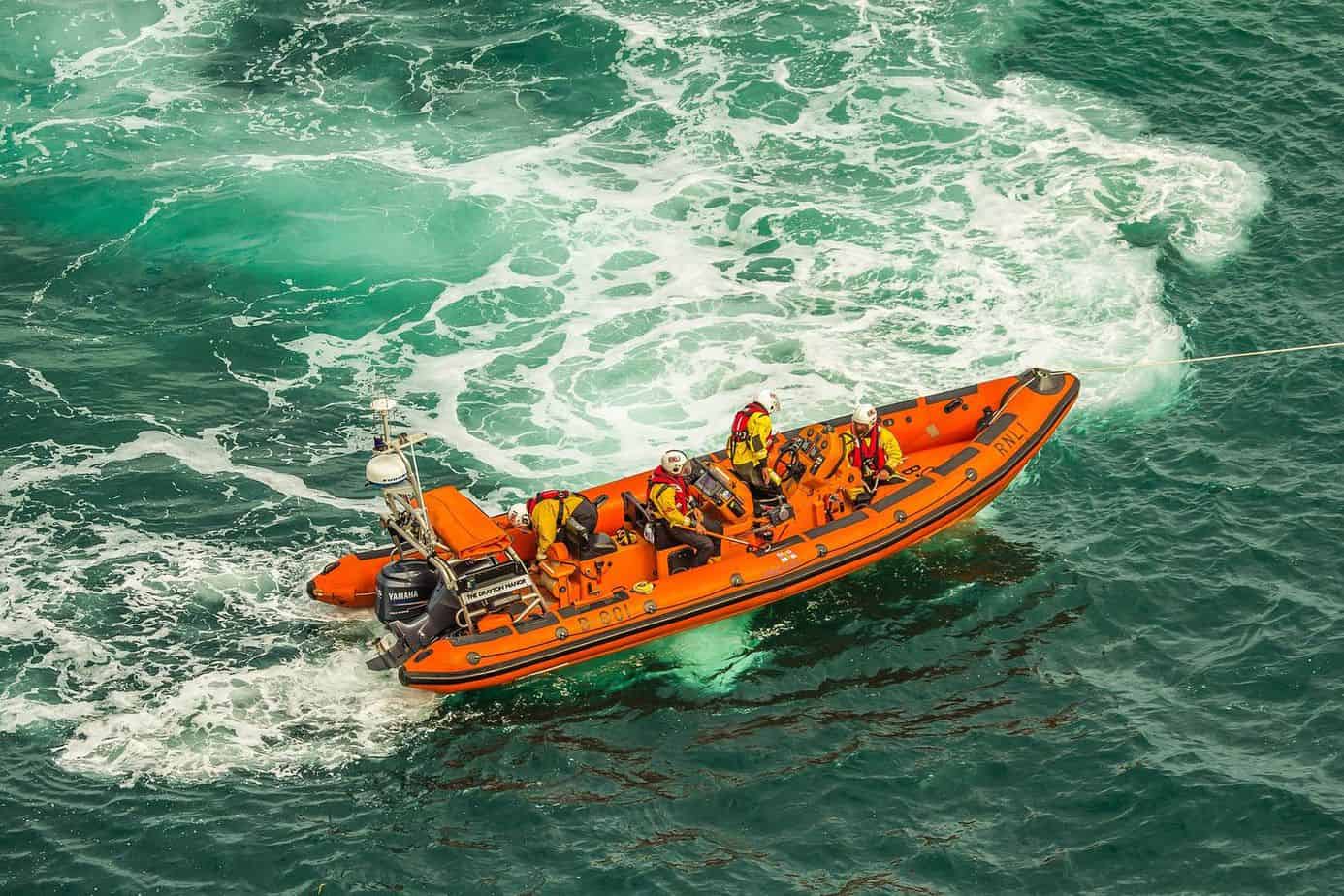 If your escape route crosses a river, a canal, bay, or lake, then a sturdy inflatable boat is your passport to safety. Including an inflatable boat and making it a useful means of transportation or an invaluable tool for food procurement is not complicated, and you just need to mark a few basics before you touch the water.

An essential piece of any specific plan, if that plan is to be assured of success, is a viable alternative plan. For those located near our nation’s plentiful and available waterways, be they rivers, canals, lakes, inland bays, or the oceans, an alternative to be considered is evacuation over water. 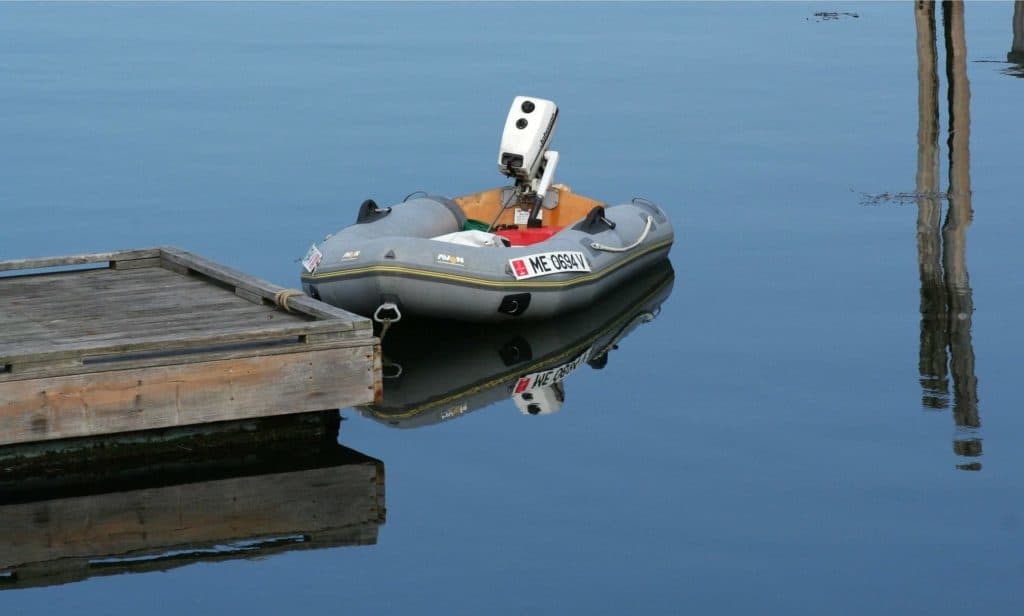 Is your home base bounded and perhaps even cut-off by water?

Today’s reinforced concrete bridges with their solid precast guard rails give every appearance of being just sections of the highway, and some are unaware of the many natural and man-made waterways surrounding and potentially entrapping them.

And where older and perhaps narrow bridges are quite evident, are they clogged and inadequate for even normal rush-hour traffic, let alone for when everyone in the city and surrounding area will be attempting to cross them — or cross those that were left — in the aftermath of a major disaster?

In times of extreme difficulty, if your only way out is across a river, canal, bay, or lake by bridge, there just may be no way out. For the resourceful and prepared, however, this potential trap could well be its own solution as an alternative, or primary, evacuation route.

But how to take full advantage of our abundant waterways for perhaps crucial transport and vital food for survival?

Storage of a boat suitable for several people and their gear is always a problem, and in troubled times just getting a boat to the water may be an even greater problem. And once there, how about launching when no “drive down” concrete launching ramp is available for that 1,000-pound boat and motor on its trailer?

There’s also the question of seaworthiness. Your greatest need ever for your boat may just be when the winds are high and small craft warnings are up—the answer: the super safe inflatable boat.

You have no doubt seen inflatables on The Undersea World of Jacques Cousteau. The French developed and manufactured several inflatable boats; i.e., Zodiac, Avon, etc. Inflatables are those small, and not so small, boats that appear as two lead grey torpedoes with their noses connected together at the bow, and their tails separated by a transom with a healthy sized outboard at the stern. Those torpedoes are a heavy fabric inflated with air, as is the inflatable’s keel.

Why an inflatable boat?

Storage for one thing. A 12- to 15-foot inflatable boat suitable to safely carry four to six adults over the roughest water will easily store in a closet or a corner of your garage, gas tank, motor, oars, and all.

Safety for another. A quality inflatable boat is virtually unsinkable. Period. You may need your foul weather gear, and you may get wet, but you won’t go down.

Ease of transport is another reason. With a little fitting, the same inflatable boat will stow in the trunk of your car, a car-top carrier, or easily in the back of a van or pickup. It won’t break your back in doing it either. A 12- to 15-foot inflatable packed for transport or storage can be handled quite easily by one person. Not altogether in one piece (motor removed, of course), but the separate components can. In fact, given the need, your inflatable could be packed to water where no roads are available — and maybe not desired.

Launching the inflatable, while no doubt easiest from a ramp, can be accomplished where access is only a footpath to a grassy bank or sandy shore. The inflatable boat can be launched and used where only scant inches of shallow water are available.

While designed primarily to be powered by a marine outboard motor, in need, the inflatable can easily be rowed. When the supertankers are dead in the water, the gasoline is all burned, and the high powered inboard’s wake no longer disturbs the water, oars will get you quietly across.

And your inflatable boat sits low in the water; its presence is not obtrusive and not announced by a big gleaming white fiberglass or shiny aluminum, hull, and a ruckus exhaust—certainly a consideration in any survival situation. 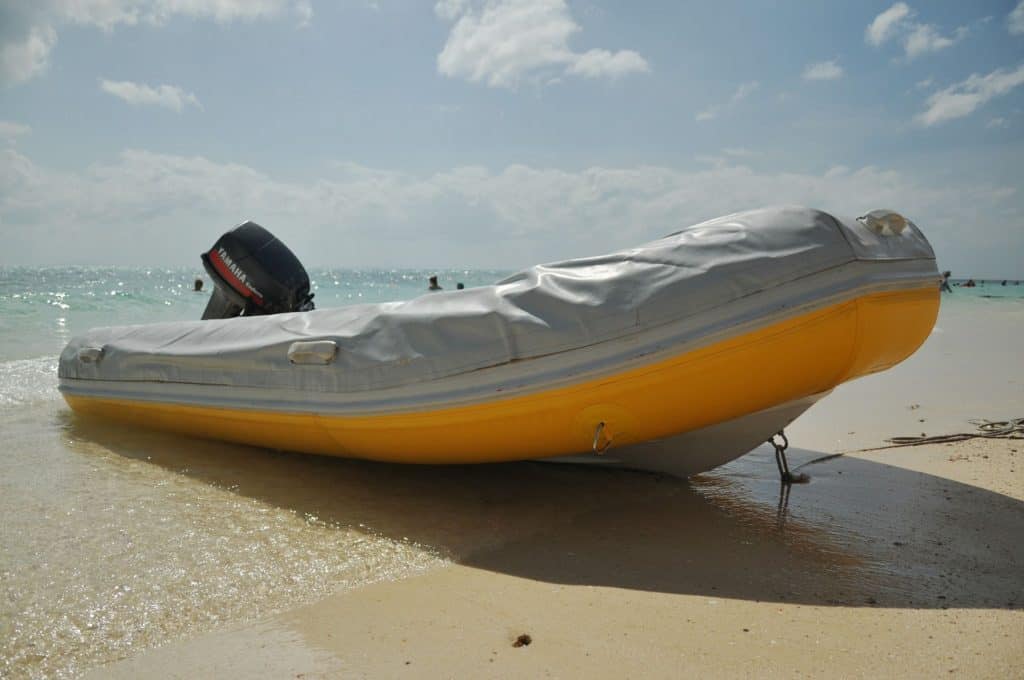 Convinced maybe, but perhaps like some, you’re bothered by visions of brightly colored and easily punctured small plastic boats bobbing in home swimming pools or nearby lakes?

The truth of the matter is that the inflatable boat we are talking of is safer and less likely to go down than boats several times its size. Inflatables are bought for their seaworthiness and safety, not the opposite. The next time you watch an Antarctic exploration film, notice the lifeboats ready on the exploration vessels — inflatables.

While good inflatable boats are available from six-foot-long dinghies to 25-foot commercial models with 175-horsepower outboards ferrying 20 men out to a construction job, the sizes most likely to be used for a survival boat will be in the 12- to 15-foot range, holding four to six people.

The basic boat will have three separate air compartments: two side tubes and an inflatable keel and floorboards. The fixed transom will be capable of taking standard marine outboard motors from 5 to 50 horsepower.

In addition to size, inflatables differ as to features such as hardware, valving, rubbing strakes, fabric reinforcement, wood or aluminum floorboards, storage space.

Excluding the motor and gas tank, the boat will break down into two packages for transport. One package containing the folded up boat itself will measure about 48 inches by 20 to 24 inches by about 10 inches thick. The other, containing the floorboards, will be about the same overall size except for only four to eight inches thick. Together they will weigh from 100 to 200 pounds depending on boat size, features, and manufacturer.

Assembly of your inflatable is very quick and simple with no tools other than the air pump required. The boat itself is first unfolded and laid out. The floorboards which have mating interlocking front and back edges are placed inside, and the sidebars that maintain them ridged are fitted over their outside edges. Each of the air chambers is then inflated. It’s as simple as that and can be accomplished in five to 10 minutes once you know your particular boat.

While you certainly will want a hand or foot pump to inflate the boat anywhere, anytime, electric pumps to be operated from a car battery are available. But the hand pumps available are large, the pressures not high, the effect to inflate not great, and the electric can be easily done without.

A more desirable, if not really necessary, aid to proper inflation is a pressure gauge. Inflation pressures vary between manufacturers but generally are between one to three psi. Without a gauge, the tendency is to under-inflate, making the boat less rigid and durable than it should be.

Like most anything, selection of a particular inflatable will be dictated by your needs and wants, tempered by the thickness of your pocketbook. In your deliberations, several factors affecting your inflatable’s size and weight need be considered.

First, what will be your boat’s prime purpose? Sole-transport for all to some remote location, or for more limited transport and food gathering once there?

If your survival boat is to be used as your main transport and is required to pack your gear as well as the occupants’ gear, something bigger than for food gathering will no doubt be required.

How many, and how far, and with what gear?

The manufacturer’s statements as to person capacity need to be considered when the boat is your sole survival transport. For limited transport and food gathering, how far is it, and how many of you are available to pack your boat to the food source waters?

While storage space required is not too much different for boats of the 12- to 15-foot range, weight is. Thus, if there are only two of you to do the packing and any distance gets involved, while a 14-foot boat may be nice on the water, a 12-foot would be a lot easier on the back.

What it boils down to is this: unless the number of people on board dictates the largest of boats, you must consider other factors. Lots of gear, large bodies of water, prime transport vehicle, no practical storage limitation, and money all would favor a large, heavy-duty boat. 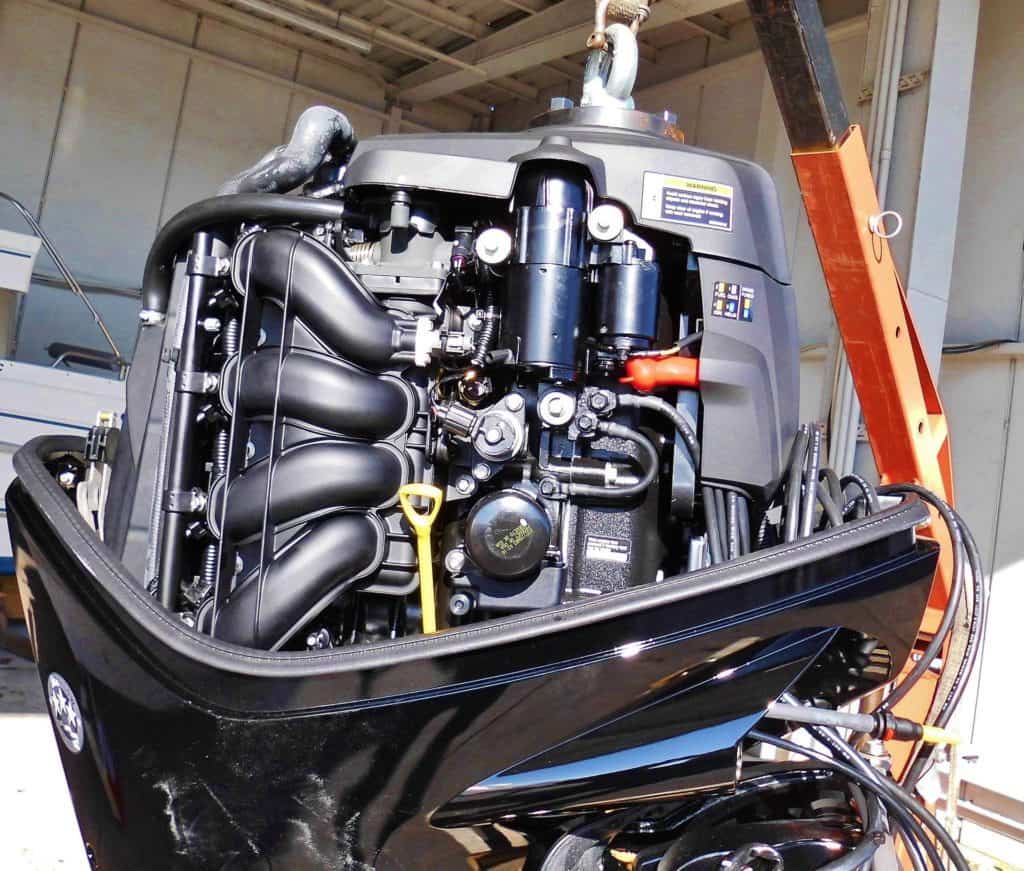 Motor selection is probably as, if not more, difficult than boat selection. And again, several considerations (not just money) are involved, making simple answers difficult.

For just normal cruising, getting where you’re going, a motor of 5 to 10 HP will do depending on actual boat size. Inflatable boats plane nicely, skimming on top of the water just like a racing hydroplane. They can cover a lot of territories quickly with little fuel when up and planing.

So at a minimum, you want enough poop to get your boat up and on the plane. And the larger the boat, and the more passengers and gear, the more power required. You can throttle back once you are up and going, but you want the power to get you there.

Further, if your survival inflatable is to double as a recreation boat (and why not), and water skiing is one of your recreations (yes, you can water ski behind an inflatable), you will need more power — lots of it and the more, the better. Consider the manufacturer’s recommendation as to what the boat’s transom will handle, but 25 to 50 horsepower will be required.

A hand or foot air pump, an air gauge, oars, an anchor, and life preservers for the entire crew should be taken along with the boat on all outings. Accessories range from collapsible plastic gas tanks to minimize lost space, to inflatable seats or pads to make the riding softer. Probably one of the most useful additions would be a set of launching wheels.

Launching wheels are a pair of “wheelbarrow” size tires bolted to the inflatable’s transom, each side of the motor, that permit the boat to be rolled into the water stern first by carrying only the light bow. In the water, they are then removed and stored away. Handy for any size boat, they are particularly useful on a 14- or 15-footer, and permit one-man launching without the benefit of a ramp or trailer.