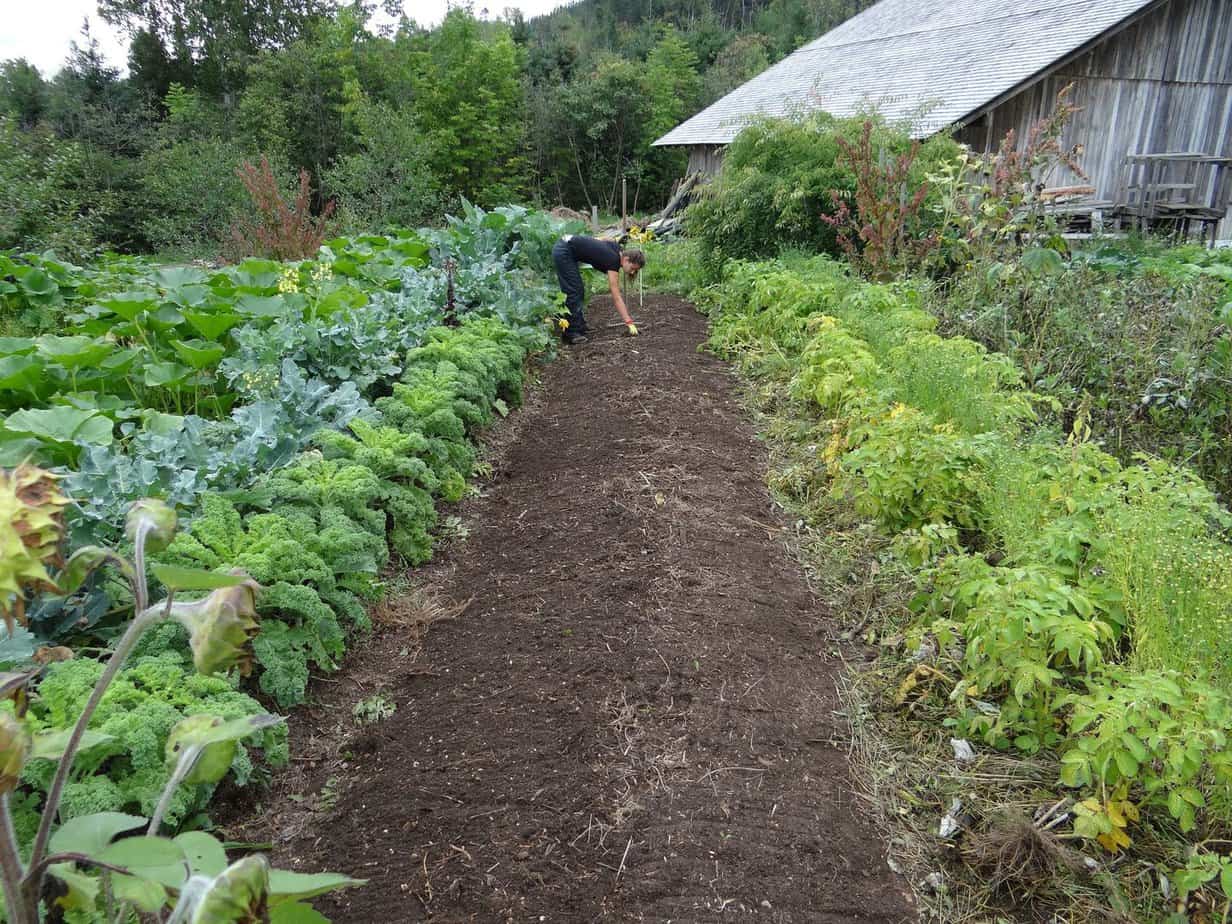 There seems to be a still commonly held belief that, in 1492, the first European explorers discovered two entire continents populated with nothing but primitive Stone Age “hunter/gatherers.” That, in turn, made it only logical that the settlers who followed would displace the Native Americans with their own version of “highest and best use” farms and towns.

It is ironic that few of them actually stopped to think about the origin of the crops they were raising. Where would the entire globe be without corn, tomatoes, chili peppers, potatoes, beans, squash, and a host of other New World crops? Rather than a diet of roots, berries, and wild game, most of North America depended on a sophisticated agriculture system to make it through the year.

When it comes to true long-term survival during bad times, it is your winter larder you have to put your most serious efforts into. Anyone can grow fresh produce during the summer and probably make it until fall; it is the months between October and June that separate the weak from the survivors.

The Great Plains tribes that we often think of as totally focused on buffalo actually depended on what they called “the three sisters”—corn, beans, and squash—as their primary means of sustenance during much of the year. 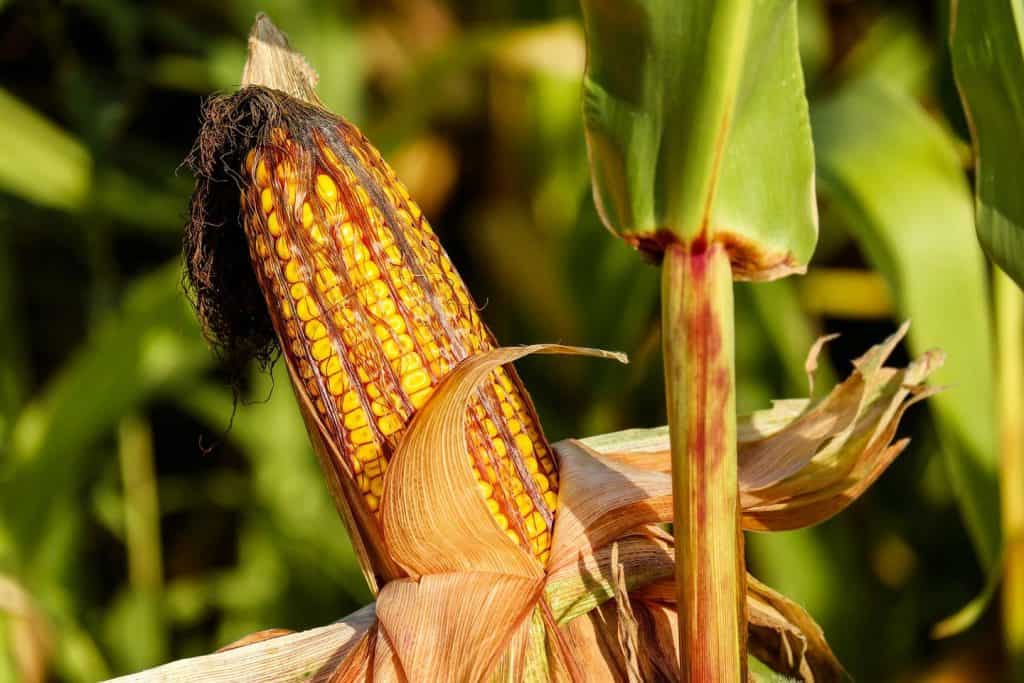 This was basically the same for many eastern tribes as well. Hunting and gathering is an extremely rough way to guarantee your survival year in and year out; sooner or later, the game disappears or moves to another area. Cultures around the world discovered thousands of years ago that farming is much more reliable.

On a recent trip to Vietnam, I saw examples of how as little as 2 acres could feed an entire family, with enough surplus to barter with for other essentials. And the Vietnamese have been doing this for several thousand years!

The first place to start on a subsistence garden is probably the same as with any good business: Location, location, location! If you think you can move way back up in the mountains where the growing seasons are short, the soil is shallow, and the water-limited, nature is going to teach you some very hard lessons.

The west is covered with old homesteads where the family “starved out” after a few years of desperately hard work. As much as modern pioneers seem to hate the thought, you are better off looking to the eastern and southern states for homestead ground.

You want as early a frost-free date as possible, warm summers, good deep soil, and either adequate natural rainfall or a reliable source of irrigation water. And make sure you check the water rights to that last item as they may not be available for your use.

A well-known homesteading quote sums it up: “In the West, whisky is for drinking, water is for fighting over!”

Most of the Midwestern states and many of the southern ones will provide these conditions, but someplace high up in the hills of Idaho probably won’t.

Power up with potatoes 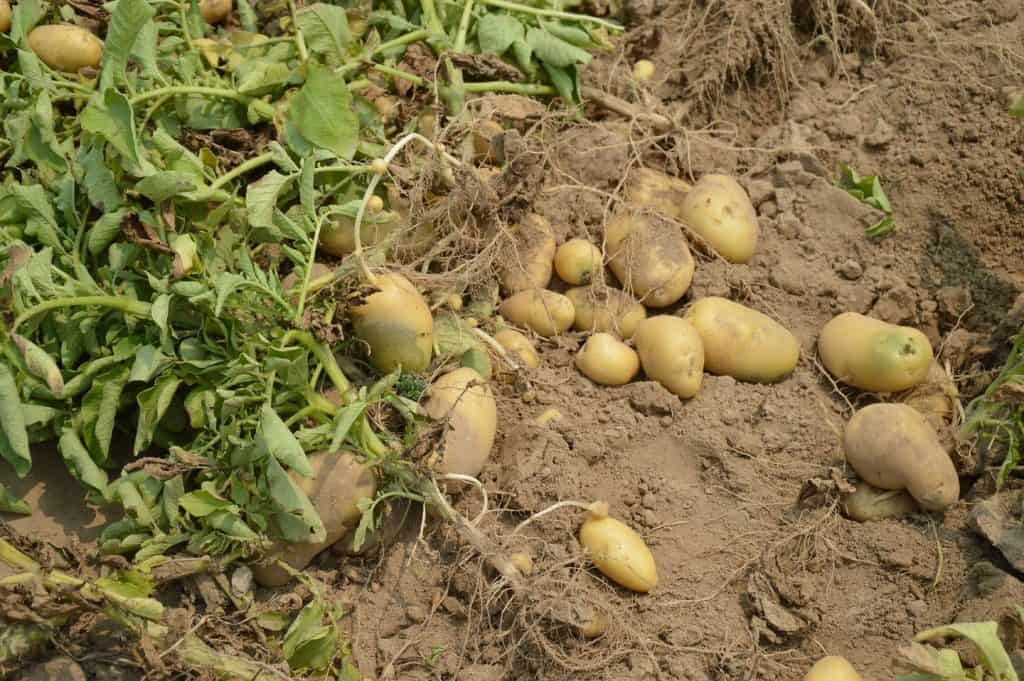 I think you need to start with something that wasn’t available to North American tribes before Columbus: potatoes. They grow well in a wide variety of soil types, tend to produce most of their yield before summer droughts start, and easily provide a large harvest that stores well for winter use.

This is one food item we virtually never buy from the store since, during “most” years, the new crop is coming on about the time we finish the last.

As the Irish once proved, you can practically live on potatoes alone three times a day—provided you have them. It might not seem like a very interesting diet, but starving is even less appealing. It takes roughly 200 feet of rows on our own homestead to produce a full year’s supply of potatoes. We would probably need to increase that if other staples, like rice, were no longer available to us.

After potatoes, corn is probably the next most important survival crop on the homestead. As every Future Farmer of America (FFA) kid knows, corn is grown in every state of the Union.

Those without a farm background tend to think of “sweet corn” first when you mention this crop, but that really isn’t ideal for long-term storage. What you need is field corn or a Native American variety made for growing to full maturity and drying on the stalk before storage.

It will then require grinding into meal to be used for bread, tortillas, or soup thickener. Like potatoes, corn is another crop that grows well under a lot of conditions and produces a relatively large harvest in a limited amount of space. If kept dry and away from rodents, it is one of the easiest crops to store for long-term use. 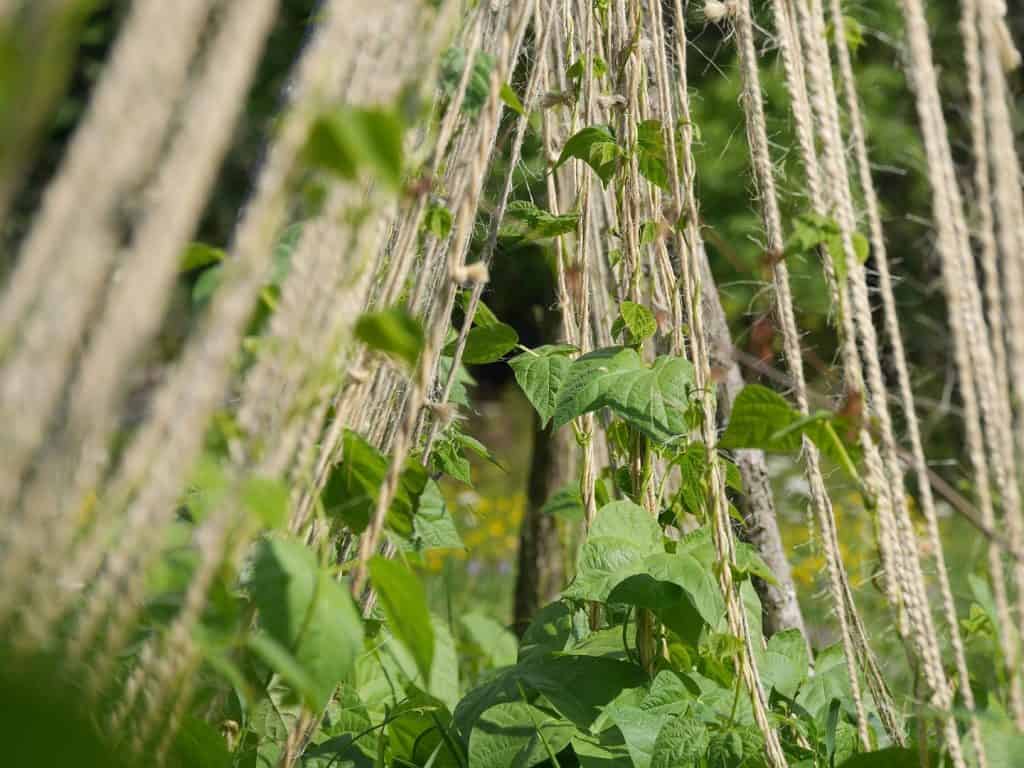 As the Native Americans knew well, corn alone is not a totally balanced diet. The first step in correcting that is to add dried beans to the larder for protein and fiber. There are a huge variety of different beans that can be grown, but, for me at least, picking one mostly depends on what produces best in your particular area.

Here in the Northwest, that narrows it down to just a couple that we have been successful with year in and year out: black coco and blue lake. A Midwestern gardener would have a far larger selection that might even include soybeans if he or she is interested in producing tofu. Like I said earlier, there are a lot of good reasons to locate your homestead in the eastern half of the U.S

Squash, and I’m also lumping pumpkins in this group, is another of the staple food crops that come in a wide variety of types. Look for the varieties labeled “winter,” a reference to their storing advantages. Most require a “curing” in the fall, but the best types will last up to six months in a cool, dark area.

Another crop that for some reason seldom seems to turn up on long-term winter survival lists is carrots. Not only are they full of all sorts of minerals and vitamins you need, but over-wintering them is also relatively easy.

In our own case, we simply mulch the row with a deep layer of leaves in the fall. Short of an extremely hard freeze, this is normally enough to protect them. It also allows more space in your cellar/fruit room for items that can’t be overwintered outside. I might add that we also mulch much of our potato crop in the ground for the same reason. If left un-mulched, they tend to freeze during bad winters. 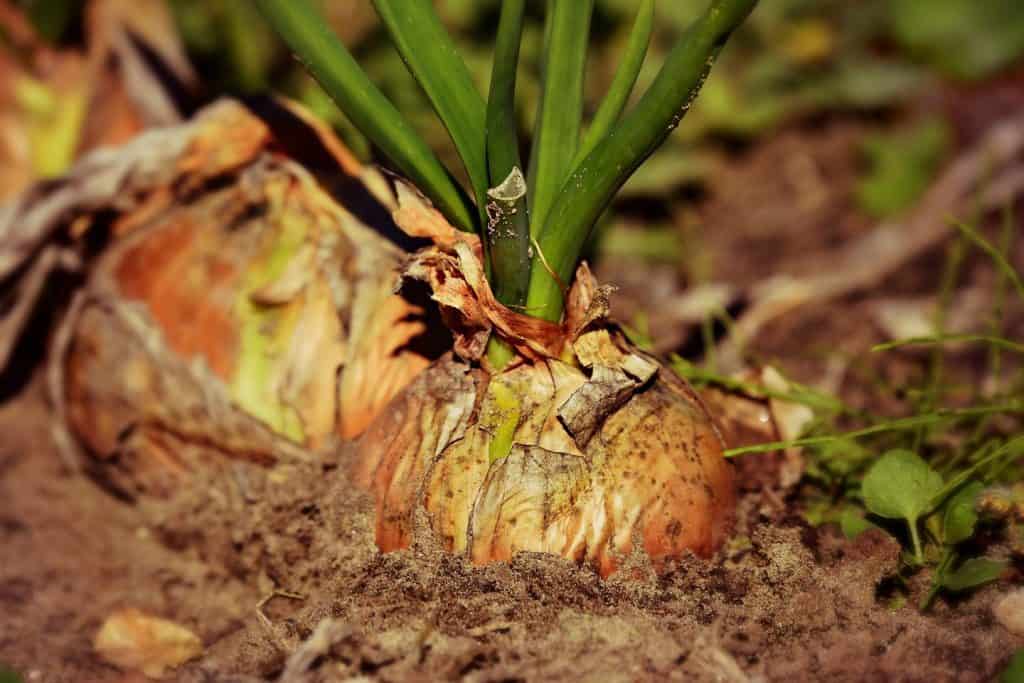 After the basic food groups to keep you alive come the plants that will make a steady diet of corn, beans, potatoes, carrots, and squash a little more bearable. I don’t care where you go in the world, you will find a small group of staples raised for that exact purpose: onions, garlic, tomatoes, and chili peppers.

Because they are easy to dry, chili peppers are probably the easiest to store for winter use. Chilies come in a huge variety of sizes, flavors, and heats, so this isn’t about trying to make everything too hot for non-spicy food eaters to stand. You can match the planting to your personal tastes pretty easily.

Both onions and garlic can be stored fresh in a cool, dark place for most of the winter, but it would be a good idea to dry extra for the time when they run out about late January. While tomatoes can also be dried under the right conditions, most of us depend on canned whole fruit and sauced versions. This, of course, will require canning lids and jars.

They are already expensive and might become very difficult to find during hard times. I consider canning lids one of the big weak links in any long-term homestead subsistence gardening plan. Stock up now!

Next on my garden plan would be a basic selection of easily grown herbs. French thyme is incredibly tough, and neither winter cold nor summer droughts phase the large pot we have on our patio.

Sage and rosemary usually survive all but the coldest winters. Our bay laurel freezes back during especially bad winters but always seems to be able to resprout from its roots come summer.

The oregano my wife once planted in her rose beds reseeds each year with 100-percent reliability. The same goes for the coriander I let go to seed in our main garden a few years ago.

Mints are another option that, once established, usually require time trying to control them.

Unfortunately, the two most basic condiments, salt and black pepper will be less easy to come by during really hard times. To me, a homestead can’t have too large a stash of salt when times get rough. 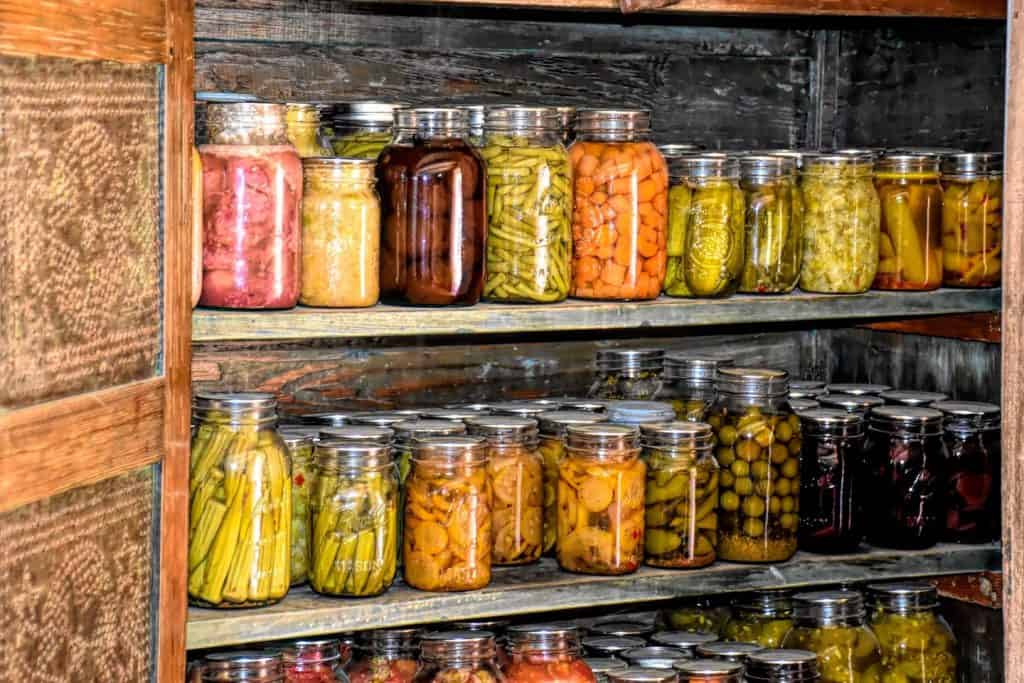 Here are my ten tips to fill the winter larder:

Living life mounding potatoes and shelling corn may not sound as romantic as becoming a mountain man roaming the forests living off fish and game, but it is far more realistic. The last 10,000 years of human civilization have proven that long-term subsistence will always depend on what you can grow, not what you can hunt.

Andrew Nold has written this article for Prepper’s Will.