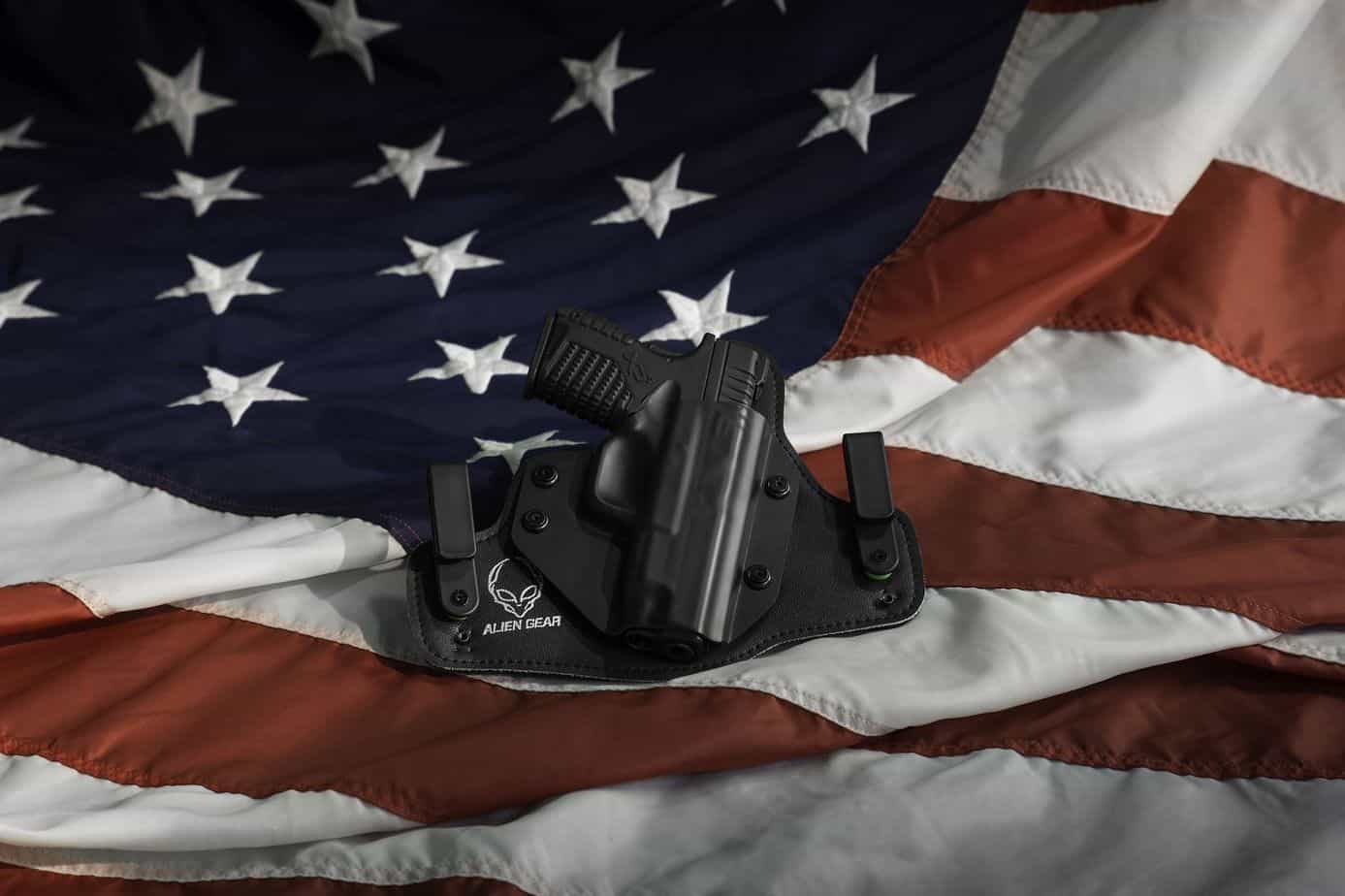 In any realistic effort to be prepared to the fullest extent to provide for the well-being of oneself and loved ones, you have to consider the carrying of concealed weapons. In contemplating going armed, the responsible individual is confronted by a concern about encountering the police and the potential consequences.

Granted, an array of problems can result, however at least occasionally, one wonders about the consideration of a police encounter versus being unarmed at the wrongs of times.

Myself though I am legal in going armed, thanks to my former occupation, I am well aware of the sweating a body can go through when faced with a possible assault, etc. when unarmed, more so when accompanied by a loved one.

Some individuals rely upon some variation of a knife, stun gun, walking stick, chemical mace, or the like, for self-defense. Personally, I would be the last to cast any aspersions on these weapons; in fact, I carry a knife constantly. However, despite considerable training in the martial arts, and good physical condition, that knife is only a backup. Let’s face it, in hardcore reality in this day and age, the firearm is the weapon for self-defense.

🔫 Picking a handgun for self-defense 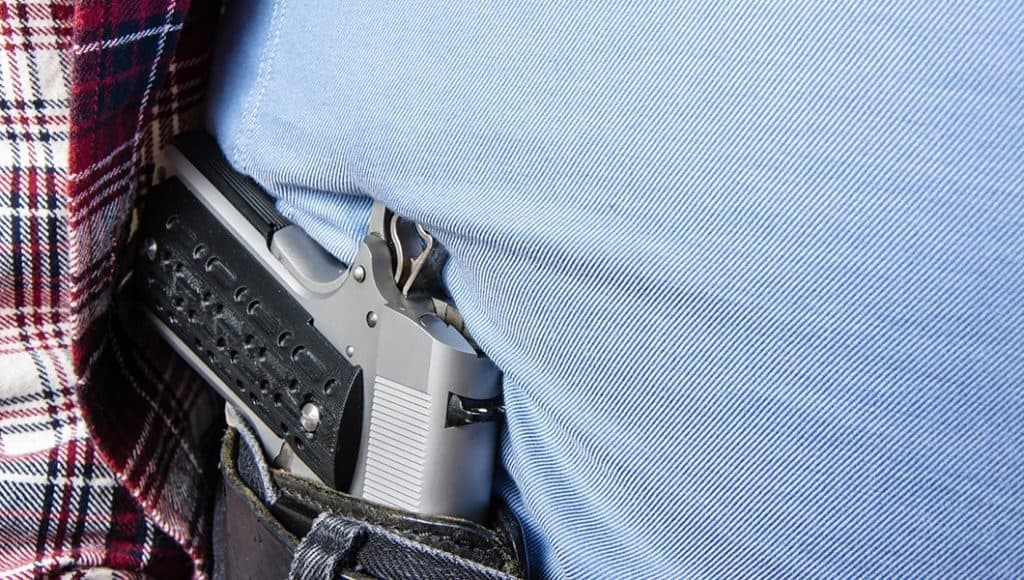 In electing to carry a firearm, obviously, a handgun for self-defense one creates a situation that calls for serious thought. There are a large number of considerations, not the least of which is the fact that, unless you’re in law enforcement, the concealed carrying of a pistol is usually very much against the law. You need to obtain a CCW permit, and there are still many states that, though they have passed concealed carry permit laws, do not issue permits or make it extremely difficult to obtain one.

In the particular city where the local concealed weapons laws are taken directly from state code. I’m sure this is the case in most places, and that most applicable ordinances are basically similar. I strongly suggest you trot down to the police department under whose jurisdiction you spend most of your time and get copies of their weapons ordinances. Some of the outstanding aspects of the ordinances I used to deal with were: No person shall knowingly, carry concealed or have concealed on his person or concealed ready at hand any deadly weapon.

Now note that it’s been my experience that to apply the definition of “deadly weapon” to say, a knife or stick type weapon, the police have to demonstrate “criminality of intent” and that the weapon is essentially designed to function as a weapon, i.e., it’s not a tool, etc. Obviously, a pistol, in the eyes of the law, is, virtually without exclusion, a weapon.

Among affirmative defenses are listed:

As far as the law is concerned, you can carry a loaded pistol legally in most instances.

Where does this leave the individual concerned about his/her safety on the street?

⚖️ Dealing with the law when carrying a handgun for self-defense

Granted, a good knife, or stick, with tons of practice, my work, but maybe it won’t. I’d rather not stake my wife’s safety on the odds. The chances are that faced with the facts of crime in the world today, you may sooner or later go in violation of the law yourself, if necessary, to survive.

The key to dealing with legal hassles is to avoid them. If you conduct yourself in a quiet, law-abiding manner, the police will have no cause to notice you, much less confront you. If they never stop you at all, they’ll never know you’re armed. You’re carrying a handgun for self-defense. No one needs to see your weapon, hear about it, nor do you need to get falling-down drunk while you’re armed.

A must-read: The Most Common Concealed Carry Mistakes You Should Avoid

A drunk/disorderly arrest would be rather disastrous for you while packing a .357 2-inch. Your condition would totally destroy any arguments about your prudence or responsibility. All this also applies to basic common-sense precautions like having a valid, up to date driver’s license and tags on your car. Even if you do get stopped, in your auto, if you’re sober, cooperate, and everything is in order, the police have no likely reason to arrest you and thus search you and/or your car.

Certainly, you want to avoid the accidental discovery of your weapon. The basic key here is to give serious, objective thought to what your real needs are, weapon and equipment-wise. My personal arms for concealed carry are many and varied, with an accompanying array of holsters.

Purchase quality weapons only, and make sure the weapon, ammunition, and magazines/loaders are all totally reliable. Practice. Ensure your skill. If you are skilled with your weapon it follows, you won’t need to carry a larger, heavier weapon to compensate for poor shot placement.

In buying holsters, again, go for quality. In order to comfortably carry a large pistol for any length of time, you need a holster of the best design and construction you can find. Forget the exotic stuff like unless it tills a specific need.

If you have a limited budget or have found a particular pistol that suits you, buy a number of holsters for that gun—leg, belt, shoulder, etc. Consider too your usual mode of dress. I normally wear jeans, boots, and for pockets, a jacket of some sort. This being so, my ability to conceal and secure weapons is unlike that of the individual who wears a sport coat and slacks in an office all day.

Your build also poses this question. At 6 feet and 180 pounds, I can easily conceal pistols that would look ludicrous hanging on a female or smaller male. Remember too, unless your weapon is a high capacity auto pistol, you’ll need to stash ammo as well. That generally means in a pocket somewhere.

🧳 Traveling with a CCW 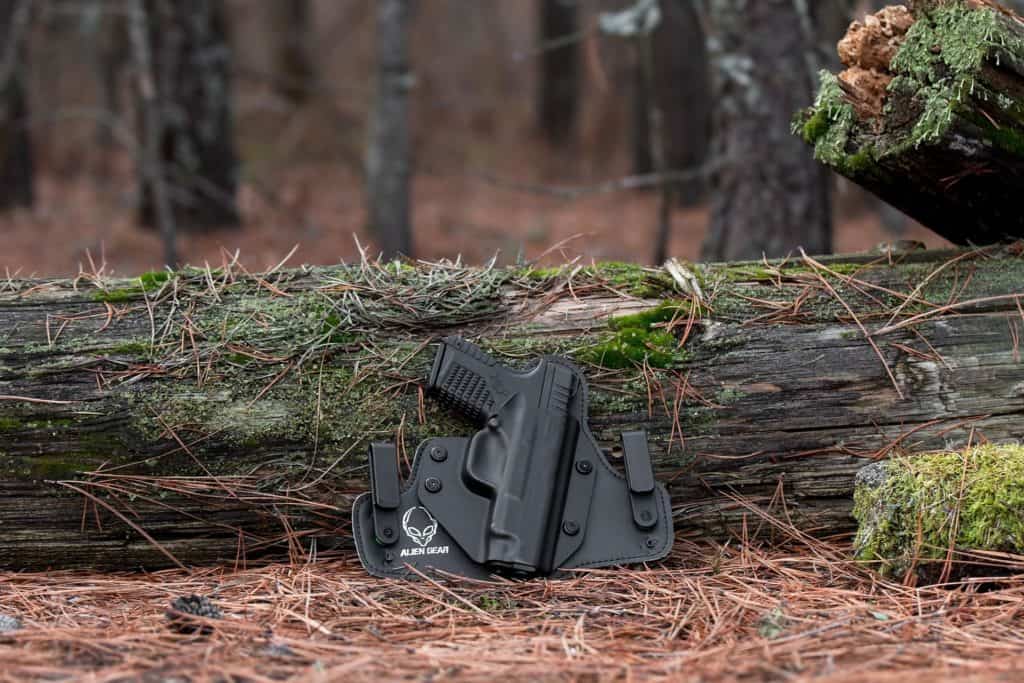 Travel poses a whole new set of problems. Where are you going, how long will you be gone, who is going with you, on and on. Think about what clothes you’ll wear on the trip. What sort of trip is it?

If you’re camping, your needs will be different from what a two-week motel-oriented trip calls for. If formal dining and such will come up, you again better try on what you think you’ll take. Try to cover every aspect. Remember, too, that you often can’t safely stash a weapon in a motel room or in a parking lot in your vehicle. Once on the road, you and your weapon(s) will likely be inseparable.

On a camping or boating type trip, I shoulder to carry a 6-inch .357. In its holster, on me, it hides well enough for that need, which is minimal (gas stations, etc.). It’s a good bush pistol, being stainless, it also endures rain and so forth fairly well.

On other trips, in motels and the like, I opt for either a 9mm or .45 auto. In this situation, I’ll also carry shoulder and belt holsters. Depending on what the trip profile is, I may favor the 9mm for its magazine capacity to eliminate some of the ammo problems.

I own a .25, but I rarely carry it unless it’s a backup on the job. The small size, small caliber guns definitely have a place. Wearing a jacket in 90-degree heat attracts attention, and you want to avoid that.

Also, women who carry weapons usually go with these. Practice, both mental and physical, is essential with these weapons. Often hard to shoot, small magazine capacity and diminutive caliber stack the deck. One needs to be skilled and cool-headed to use such weapons effectively in combat.

👮 Explaining yourself to the authorities

Obviously, carrying a pistol concealed is a very individual type of operation, not to be jumped into lightly. Still, let us suppose you did all your homework, but, somehow, you got burned. There you are, looking at the uniformed gentleman with your pistol in his hand, and your stress factor is climbing rapidly. Well, above all, cooperate. Keep it on a yes, sir, no sir basis and do as you’re told.

Don’t try to play attorney, no matter what you think you know. Most cops are not going to set out to mess you over, violate your rights or such. You argue, give them problems, or become abusive, and they will do whatever they can to make your situation uncomfortable.

Legally even politely, they can do a lot. As well, in court, a good attitude goes a long way. At your first opportunity, call your attorney, don’t be demanding, simply ask. If the officer says “in a minute” or the like, leave it at that. Only if it starts looking like you or it was forgotten should you push it a little.

Don’t try the officer’s patience. If you have no record, cooperate, and use your head, even if charged, the outlook is not too grim. While all the potentialities can’t be discussed here, your attitude and background make a great difference. You should come out fairly well.

Going armed is like any aspect of survival—thinking, using your head, is the decisive factor. If you decide to go in a free gun zone with your CCW, expect to deal with the consequences. I carry a handgun for self-defense, but I’m a responsible owner, and I do not flaunt it around. There are a lot of things to consider before applying for a CCW permit, and once you manage to obtain one (if any), your behavior plays an important role in keeping it.