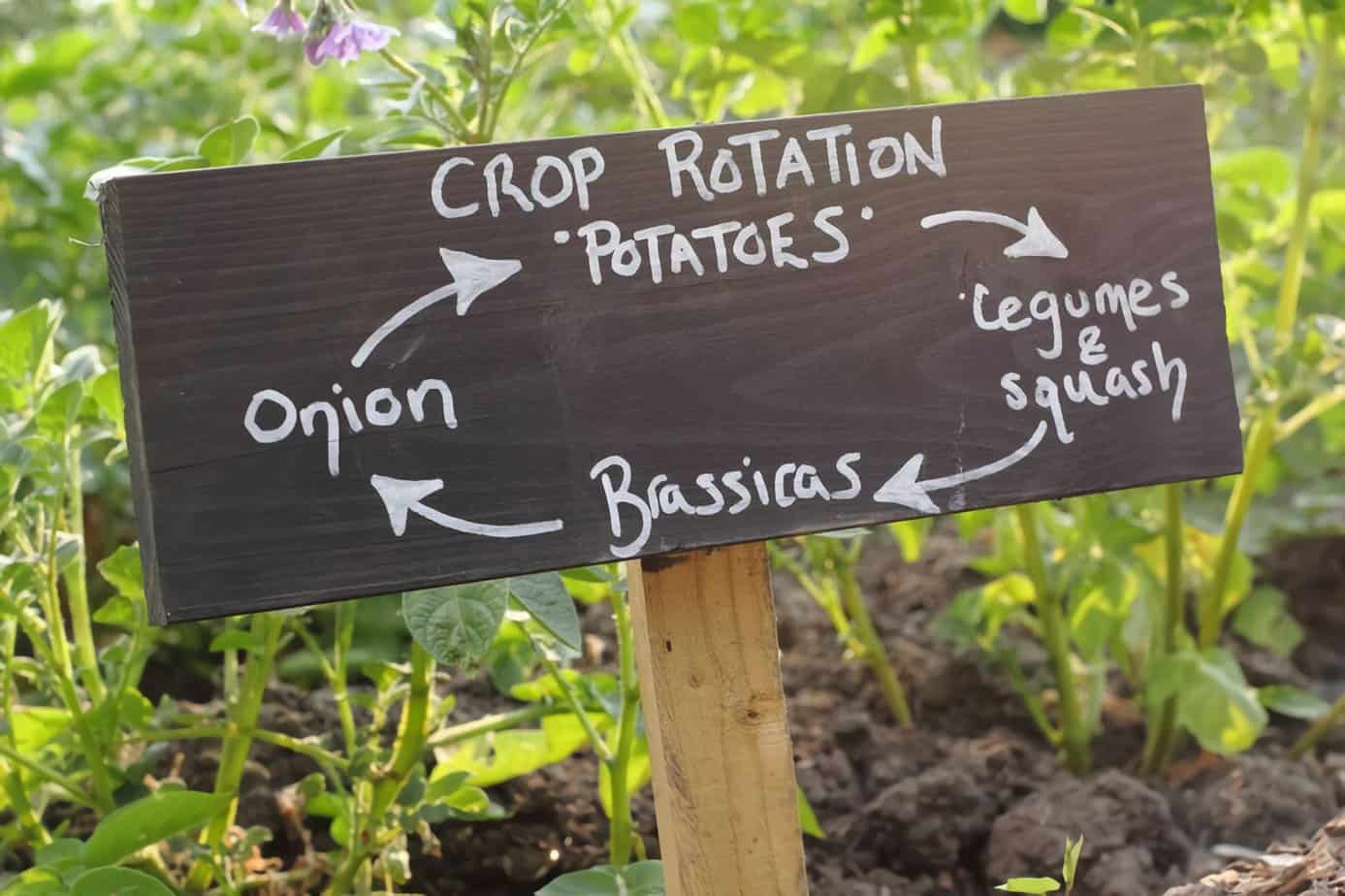 One important rule of organic gardening states that you should rotate plant families as much as possible from one season to the next, so that related crops are not planted in the same location more than every three years or so.

Take, for example, potatoes. Fungi that create scabby skin patches, as well as root-killing Verticillium fungi (which also harm tomatoes and eggplant) and small nematodes that harm potatoes, can grow throughout the course of a season.

If you plant potatoes in the same location, again and again, these pathogens will be just waiting to damage the crop. The potato pathogens are deprived of the host plant they require when the space is rotated to another unrelated crop. Most pests and diseases can harm plants in the same botanical family but cannot harm crops that are not related.

What if you don’t use a crop rotation?

Field investigations in Connecticut and Europe show that your potato yield will drop by 40% very fast, mostly due to disease.

If you planted tomatoes in the same spot over and over again, you should expect similar decreases, according to a 7-year research from Ontario. Continuous tomatoes consistently generated the lowest yields when compared to eight alternative rotations with other vegetables or cover crops.

Snap beans that are not rotated will also produce poorly. According to a Cornell University study, snap bean production more than doubled when beans were planted after corn rather than after snap beans.

Rotating crops, in addition to breaking disease cycles, reduces nutrient depletion. Tomatoes, for example, require a lot of calcium, just like beans and beets. However, the precise benefits of good crop rotations vary depending on crop sequence.

Nitrogen-fixing legumes frequently require less nitrogen from the soil than they replenish, and their presence promotes the proliferation of beneficial soil microbes.

However, in some cases, the “rotation effect” defies a simple explanation. For example, we don’t know why potatoes grow well when planted after sweet corn, but they do.

Crop rotation can become so difficult so quickly that it’s no surprise that we’re tempted to cheat.

What if your garden is like mine, with a dozen permanent beds planted with 20 or more different crops over the course of a growing season?

It would be foolish not to use rotations.

Early-season infection rates (measured when 5% of fruits became red) increased from 3% in the first year to 74% in the third year when researchers at Pennsylvania State University tracked early blight of tomatoes cultivated in the same location for four years.

When they tried the same monoculture strategy with cantaloupes, alternaria blight symptoms showed earlier and earlier with each consecutive season.

Some folks are reticent when it comes to crop rotation

Some organic gardeners argue that crop rotation rules designed for farmers are inappropriate for home gardens. Crop residue is either plowed under or left on the surface to decay on farms, resulting in huge infusions of a particular type of plant material into the soil.

Gardeners are more likely to pick up, and compost spent crops, as well as dig in compost or other soil amendments between plantings, replenishing nutrients and invigorating the soil food web in a highly diverse manner.

Biodegradable mulches raise new concerns: if you thickly mulch your potatoes with straw, crushed leaves, grass clippings, or all three, it makes sense to include those organic matter types in your rotation plans.

But don’t imagine that simply pulling up plants will disrupt the food supply of soilborne plant diseases to the degree where rotations are unnecessary.

When I pick up beans, for example, only a small tangle of roots gets pulled out with the plants. The majority of the root system remains in the soil. If I plant beans in that row again in two years, the plants will be vulnerable to vitamin deficiencies as well as numerous main bean diseases.

Using a three-year crop rotation drastically minimizes the likelihood of my beans being affected by root rot, white mold, and several major blights.

Eliot Coleman, a small-scale commercial farmer, designed an eight-crop rotation plan that integrates decades of farm and garden research, and it’s a terrific place to start planning rotations for your garden. 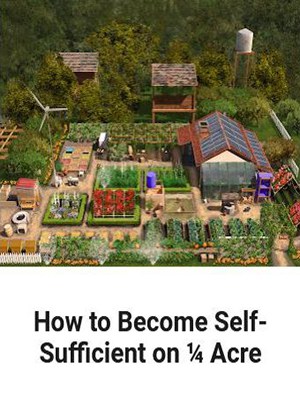 Coleman’s plants are listed in the following order:

You now have your rotation plan if you only grow these eight crops in eight rows or beds. Simply arrange your crops in the correct order and move them one spot over every year.

However, it is unlikely that your garden will be this straightforward; therefore, you will need a tailored strategy that relocates the primary plant families from one season to the next. Families are groups of crops that are linked and thus susceptible to many of the same pests and illnesses.

The nine plant families grown in vegetable gardens are outlined in the following chapter, but certain families will require more area than others.

For example, tomato-family crops (tomatoes, peppers, eggplant, potatoes) may require a lot of gardening space, but only a little gardening space is needed for spinach, chard, or beets, and you may not be able to grow space-hungry sweet corn at all.

Begin planning your rotations by establishing a list of your must-have crops and the amount of gardening space each one requires. Then group them according to the plant family.

You’ll also need to figure out which crop sequences perform effectively in your garden throughout the same growing season.

Many gardeners, for example, plant garlic in the ground from fall to midsummer, after which the region can be planted with a second crop. If I hurry in my Zone 6 garden, I can grow shell beans after garlic, giving me a garlic/bean sequence.

A garlic/lettuce sequence may be used in a cooler area. A snap pea/carrot sequence, an onion/leafy green series, and a broccoli/bush bean sequence also work nicely for me. Make a list of any crop sequences you frequently use (or want to try).

You can make your rotations easier by categorizing your crops into the following key plant families: 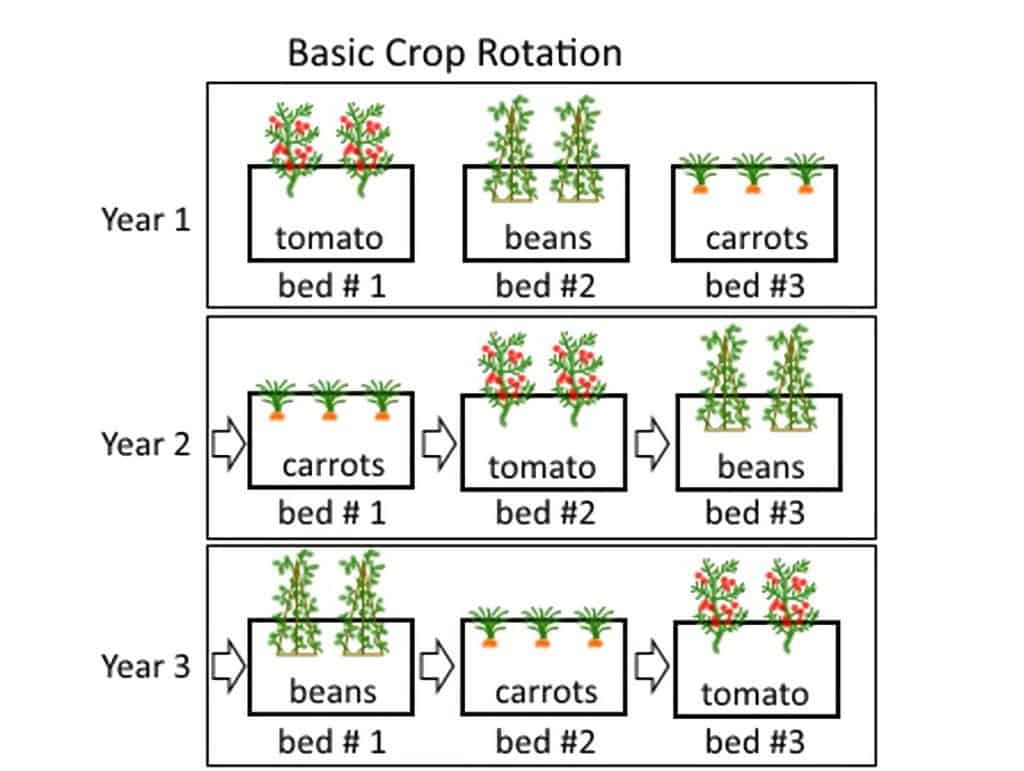 Two sheets of paper, a pen or pencil, and scissors are required. Make a crude design of your garden on one sheet, noting the proportions of beds or rows. Write down where various crops grew last year to the best of your ability. It’s much easier to remember where you planted what if you picture your garden at various stages during the season.

Copy the crops, plant family, and crop sequences from your list onto these “crop markers” by cutting another piece of paper into smaller pieces that outfit the rows or beds in your garden drawing.

I end up with markers for ten crops or crop sequences to cycle inside my twelve permanent beds in my garden. It’s a good idea to have a pair of beds for experimentation and tempting impulses.

Back at the drafting board, spend some time deciphering your intentions by rearranging the identified crop/plant family markers on your garden diagram. Your goal will be to have your plantings travel in a logical order and direction, whether it’s left to right, front to back, circular, or whatever you pick.

Expect improvisation and innovation. For example, I’m currently growing more peas and beans to extend the time between onion and garlic plantings, which are priority crops in my garden. When I’m not sure about a rotation, I throw in some beans or leafy greens.

If you’re feeling frustrated, play with your markers and draw for a bit before packing them away for a few days of thought time. When you return to work, you should have an easier time identifying at least a few effective rotations ready to go.

The payback for this level of garden planning can be great after a few years of fine-tuning—a long-term garden rotation plan that runs itself and benefits every crop you grow.

Varying plants have different nutritional requirements and are vulnerable to various infections and pests.

If a farmer plants the same crop in the same spot every year, as is customary in conventional farming, he/she drains the same nutrients out of the soil year after year.

Pests and illnesses will happily make themselves at home as long as their favorite food source is available. Increased quantities of chemical fertilizers and pesticides are required in monocultures like this to maintain yields high while keeping bugs and diseases at bay.

Crop rotation aids in the restoration of nutrients to the soil without the use of synthetic fertilizers. Additionally, the method aims to stop pest and disease cycles, enhance soil health by increasing biomass from varied crop root structures, and increase farm biodiversity.

Variety is essential for soil life, and beneficial insects and pollinators are drawn to it above ground as well.

Growing the best crops for coping with the next food crisis

10 Survival Foods You Must Never (Ever!) Stockpile

How to enrich your soil with cover crops