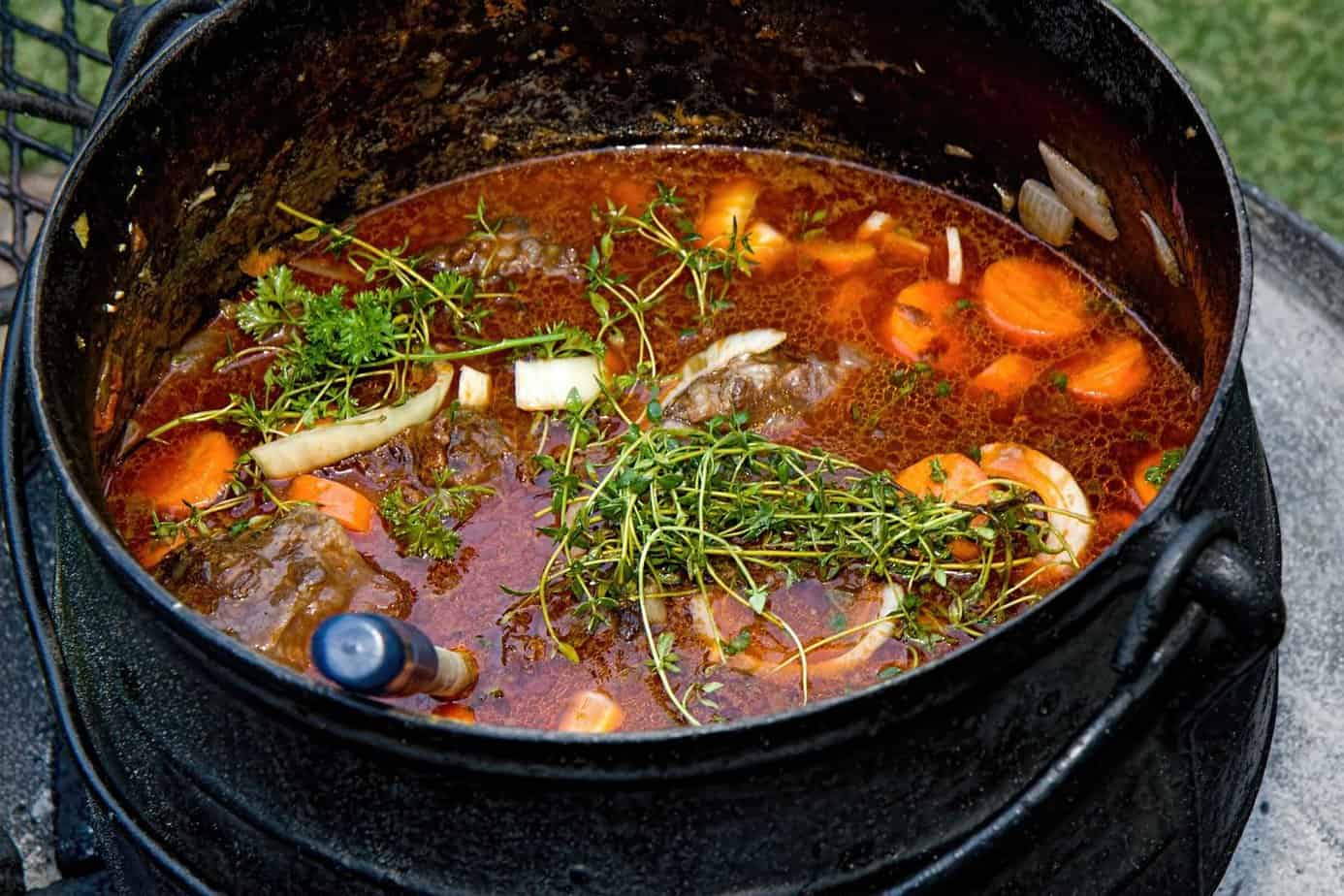 Traditional meat stews have existed since before the written word. Hunter-gatherers worldwide would boil what they could find in a hollowed rock, an animal skin or, later, in clay pots. Different regions of the world developed different styles of stew using local ingredients.

As the United States was settled, immigrants from around the world arrived here with their own stew recipes. They used the same recipes with ingredients from their new home to make new regional dishes. While these new American stews feature distinct ingredients, they share a few similarities, too.

Chief among these is the inclusion of locally sourced meat and produce. Since these stews were often meant to feed a large crowd, they regularly included several meats, with each family supplying a small amount of whatever was on hand. Because of this community involvement, cooking up stew drew crowds from all around. In time, these gatherings became regular festivals. 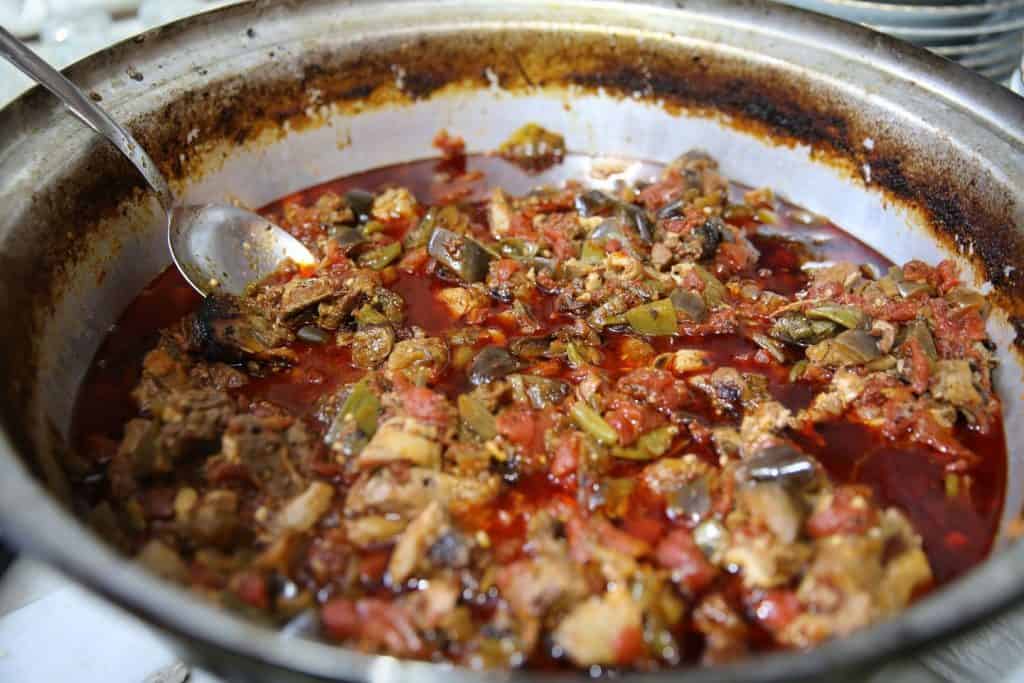 Recipes were further refined, and regional dishes were born. Let’s sample some of these regional American stews and their origins, and I’ll provide a few recipes for you and your family to try at home. 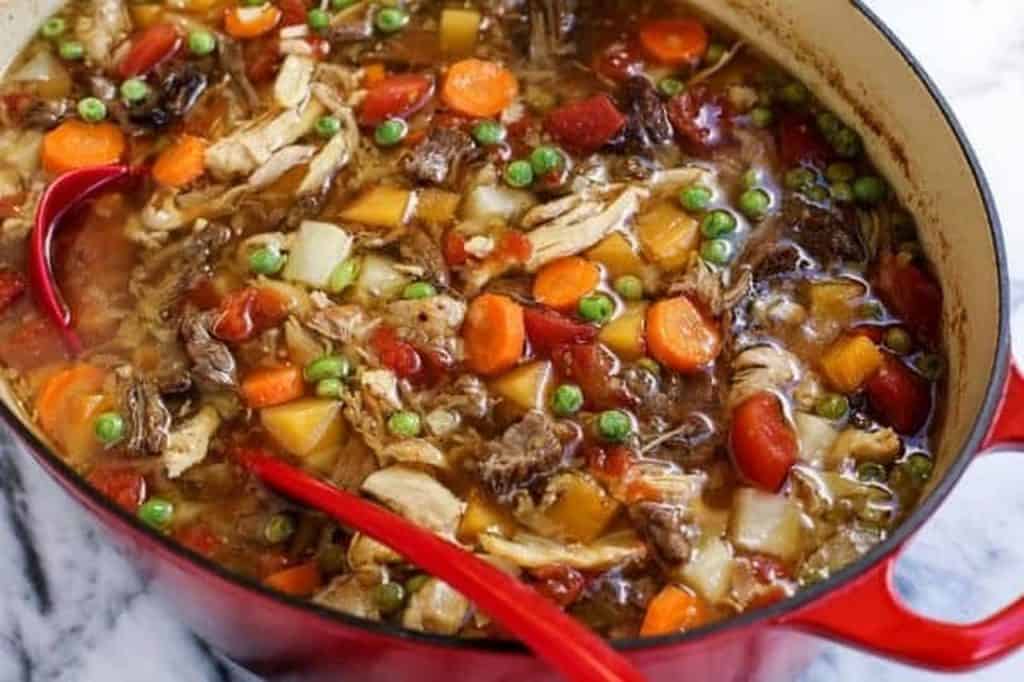 Hailing from the upper Midwest, immigrants from Belgium developed booyah from the French word “bouillon.” Like most stews, booyah starts with a stock base. Traditional meats for the stew include beef short ribs, chicken and often pork. Fresh local vegetables—peas, celery, onions, carrots, cabbage, tomatoes, potatoes, and rutabagas—were added to the meat base.

Owing to its French roots, the stew is flavored with fresh herbs. Traditionally, the stew was cooked in a large booyah pot, often holding 30 gallons or more, over an open fire.

Interestingly, the term “booyah” also describes the social event surrounding the dish. These parties often last days, while the stew takes as long as 36-48 hours to cook. Residents from around the area supply produce from their gardens or larders and take turns watching over the fire as the stew slowly simmers. October is booyah-festival season throughout Wisconsin.

Folks at many of these gatherings cook pots of booyah up to 100 gallons in size, slow-simmered for a day or more before the festival even begins. 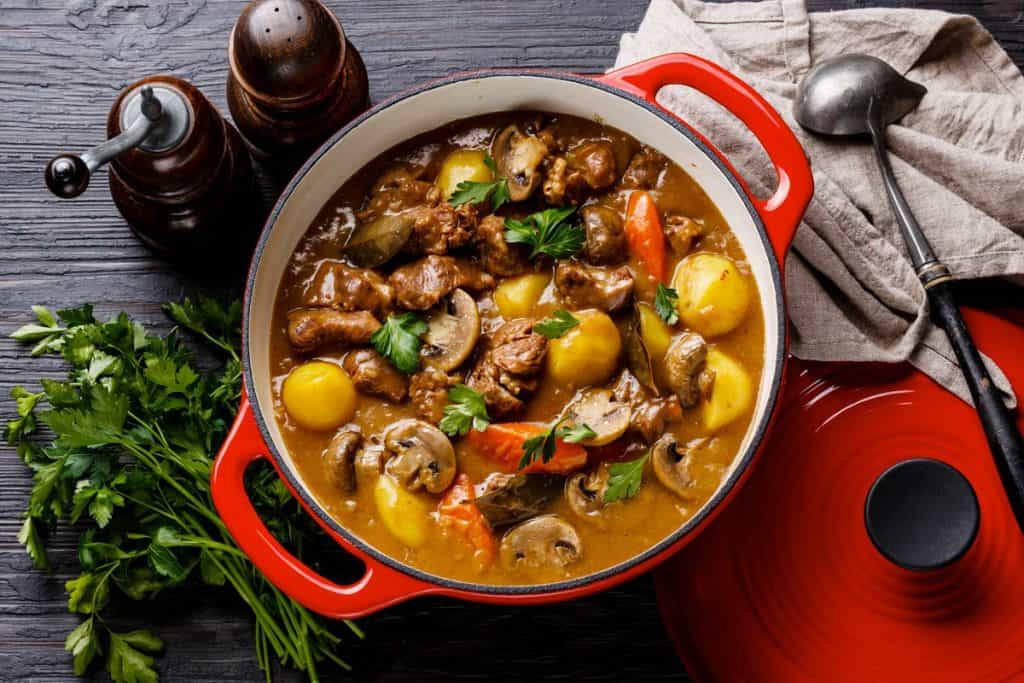 Unlike some other regional stews, burgoo meats were often slow-smoked over hickory before being added to the pot. While the origins of burgoo are murky at best, there’s a fairly reliable record of French chef Gustave Jaubert.

After serving General John Hunt Morgan in the Civil War, Jaubert was hired as the company cook for what today is Buffalo Trace Distillery, then known as the Old Fired Copper Distillery. Jaubert’s fame quickly spread, and his burgoo came to be in high demand for large social events.

One such event was covered by the Louisville Courier-Journal and reprinted in The New York Times, where the recipe was described as containing, “400 pounds of beef, six dozen chickens, four dozen rabbits, thirty cans of tomatoes, twenty dozen cans of corn, fifteen bushels of potatoes, and five bushels of onions.”

The article noted that Jaubert, assisted by 10 cooks, slow-simmered 1,000 gallons of burgoo over a period of days. The resulting burgoo was served alongside barbecued meats, a tradition that lives on today in multiple burgoo festivals around the region.

Today, almost all burgoo recipes contain smoked mutton. Regional areas of Kentucky have become known for cooking the strongly flavored meat, and its gamy flavor has transferred to the stew the area has perfected.

Yield: Serves 15-20; recipe can be cut in half to serve fewer people. 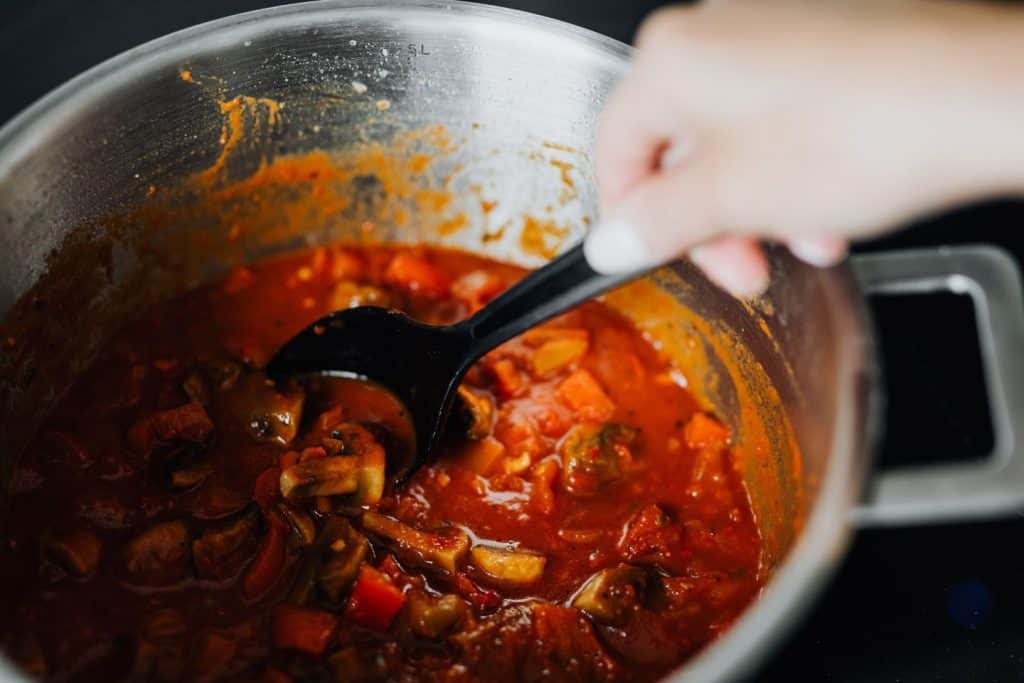 Head east and south from burgoo country and you find Brunswick stew. Both Brunswick County, Virginia, and Brunswick, Georgia, take credit for the dish’s invention.

While the Georgia version claims an origin date of 1898, the Virginia claim boasts an even earlier date of 1828 when it was first concocted at a hunting camp. A third possible beginning for Brunswick stew lies with the Native Americans of the region, who were cooking and eating a similar stew of local ingredients long before the first European settlers arrived.

Regardless of their origin, both stews are tomato-based, heavy on lima or butter beans, and both versions started with wild game. The two stews differ in the use of potatoes. The North Carolina version uses potatoes to thicken the stew, while the Georgia version is thinner. Along with its thickened base, the North Carolina recipe also uses smoked pork as the principal meat, lending an overall smokier flavor. Both versions often incorporate beef, chicken, or other meats.

Like burgoo and booyah, numerous festivals are held throughout both states each fall. Cookers for each festival show up a day or two before the start date to build fires and begin cooking the stews in gigantic cast-iron kettles.

Unlike the stews popular in the north, Brunswick stew often incorporates okra. Regional vegetables like okra are one of the defining characteristics in the area-specific stews of the United States. 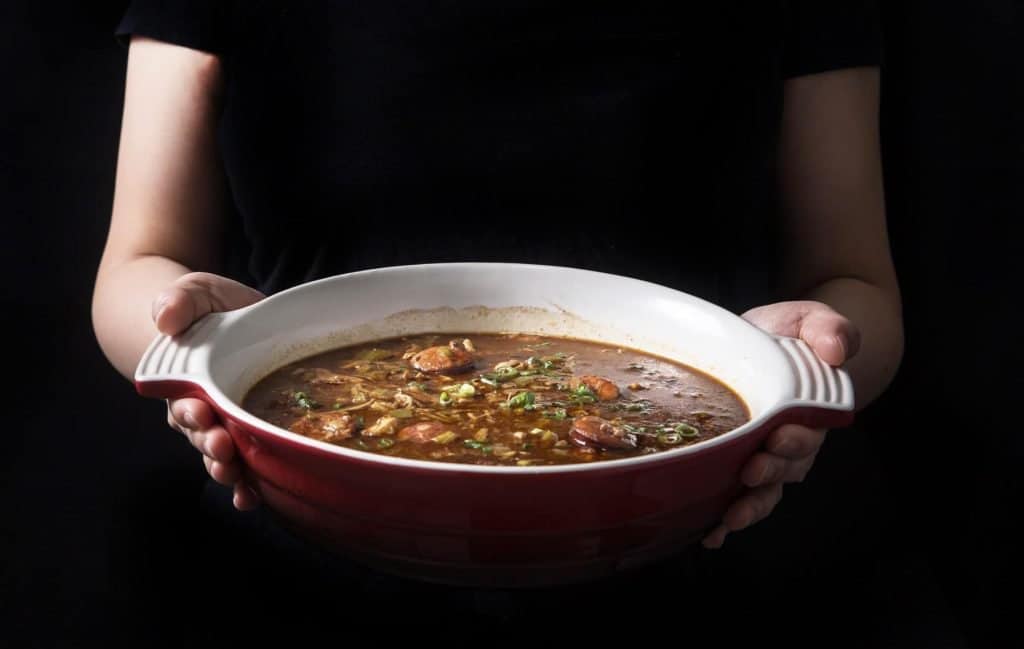 Move southwest of the Brunswick stew area to the swamps of east Texas and Louisiana, and you find perhaps America’s most well-known regional stew. Born from a mixture of the French-heritage Creole and Cajun settlers of the area and their love of roux, and the native Choctaws and their use of powdered filé (dried and ground sassafras leaves), even the word “gumbo” is derived from the West African word for okra, a central ingredient in many gumbo recipes.

Perhaps no other stew has as many variations as gumbo. Depending on the cook, gumbo may contain either local meats or seafood. One thing all gumbo recipes share is a start with a dark roux, which is simply a mixture of flour and fat or oil, cooked over low heat and constantly stirred until it becomes a deep mahogany brown. Walk away while the roux cooks, and it can burn instantly.

Once the roux is finished, the meat for gumbo can be seafood, wild game or sausage and chicken. Generally, sausage can be added to any gumbo, but seafoods generally aren’t mixed with other meats. The cooking liquid is also the center of some controversy. Some recipes call for tomatoes, while other gumbo cooks say stock is the only way to go, and a true gumbo cook would never use tomatoes.

Filé or okra can be used as a thickener. Other recipes don’t call for an additional thickener, simply relying on the flour from the roux to add body to the gumbo. Regardless of the recipe, gumbos are usually served over a bowl of white rice.

When the roux is slightly darker than smooth peanut butter (15-20 minutes), add the bell peppers, celery, and onions. Stir to coat everything well with the browned roux. Continue cooking, stirring constantly, until the vegetables begin to soften. Return the fowl to the pot. Add the sausage and garlic. Stir well.

3.Pour in water and chicken stock. Add the Cajun seasoning, bay leaves, tomato paste, and filé powder. Turn up the heat and bring the gumbo to a simmer. Reduce heat, cover the pot and simmer for at least two hours.

4.To serve, spoon some cooked white rice into a bowl and ladle over the gumbo. Enjoy the gumbo with a chunk of crusty French bread to sop up the juice.

The pot for American Stews 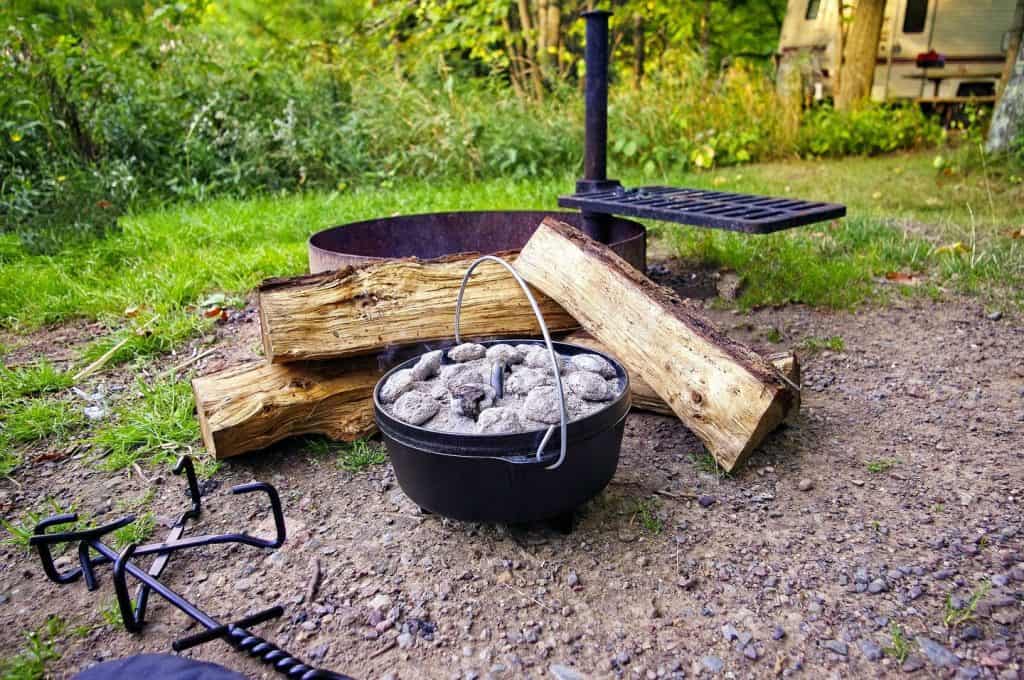 Since most of these regional stews were first designed to feed large gatherings, they were initially cooked in giant iron kettles over open fires. While not many of us are feeding hundreds of people at a time these days, cast iron is still the way to go when it comes to cooking these dishes.

A Dutch oven holds enough to feed a large family or make plenty of leftovers to freeze for later. If your recipe contains lots of high-acid tomatoes, an enameled Dutch oven is best. Whether well-seasoned cast iron or enamel-coated, these pots will hold an even heat at low temperatures over just about any heat source, from kitchen range to a campfire.

Making hearty and historic American stews like the ones I’ve outlined here is a great way to preserve cultural heritage in our modern society, and they taste phenomenal, too. Try them; I believe you’ll agree.